Increasing numbers of new glass kerosene lamps have been coming on the market. This includes everything from small finger-lamps to multicolored banquet lamps. New lamps continue to be made overseas as well as here in America.

The new kerosene lamps are generally quite good quality. Like any other mass produced items, however, pattern detail and overall quality vary from piece to piece. One of the catalogs from a new lamp wholesaler claims its lamps "were made using the original antique lamps as models." Regardless of pattern, there are several ways to identify these new lamps: 1– how fonts and bases are joined; 2–hardware; and, 3–colors.

The easiest first test to catch new glass lamps is to simply expose them to black light. The vast majority of all new glass lamp fonts and bases are glued together. Vintage glass kerosene lamps were fused together when the glass was hot. All the pressed glass lamps we purchased for this article, which came from several sources, were glued. Even knowing what to look for, it is difficult to detect the glue in ordinary light with the naked eye. But every new joint fluoresces brightly in black light (Fig. 3). Old joints that are fused, not glued, do not fluoresce at the base-font joint.

Pure acetone has no effect on the modern glue. Neither does any one of several other solvents and paint removers. The new lamps were finally were separated after boiling them in water for about 5 minutes. (CAUTION: The boiling water test is mentioned purely to prove that the lamps are indeed glued. This procedure should be considered hazardous and is not recommended as a test for new and old.)

Another clue to age is the metal hardware. This includes the metal fitting collar into which the burner screws; metal filling holes through which fuel is poured; and metal font-to-base connections.

Don't be fooled by elaborate new hardware such as you might find in larger lamps like the new Cathedral lamp in Fig. 13. The hardware joining the base and font looks complicated but it is just another form of a glued joint. A metal plate is glued to the bottom of the font. A bolt passes through this plate on into the glass base where it is fastened with a nut.

Old glass fonts intended to be used with metal connectors generally have fairly long glass pegs (Fig. 5) molded on the base of the font. Packing plaster around the peg held the old font in the old metal connector. New fonts designed to be glued into new metal connectors or glued to a glass base, have only a slightly raised bump (Fig. 4) on the bottom of the font, not a peg.

The long bolts generally used in new hardware are threaded their entire length (Fig. 9, left). Old bolts are threaded only on the last 1/2-inch or so. Nearly all the old bolts are packed in plaster so they don't move. Most new bolts are loose within the metal plate (Fig. 10).

All but two pieces of new metal hardware on these lamps were brass plated, so it's tempting to say all the new hardware is plated. But that isn't true. Connections on the new Cathedral lamp are solid brass. What the hardware is made of isn't as important as how it's fastened to the glass. Keep in mind, however, that old hardware can be put on new lamps. They might even be put on with plaster.

Many of the new lamps are being produced in colors and color combinations not originally made. A list of new pressed glass kerosene lamps including colors and sizes appears at the end of this article. If an original was only made in clear, any colored examples would obviously be highly suspect. 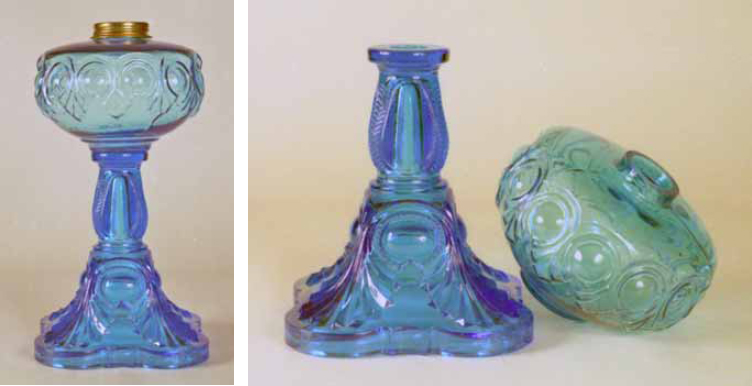 Fig. 1 Almost all of the new glass lamps are joined together with glue. Dissolve the glue and
the lamp comes apart. 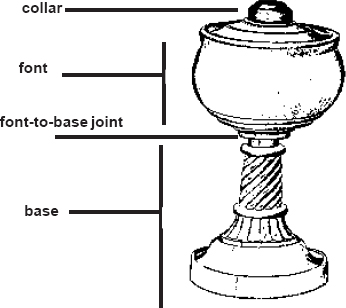 Fig. 2 The three basic parts of a lamp are the collar- usually made of metal, where the burner screws on; the font- where the fuel is stored; and the base- which supports the font. 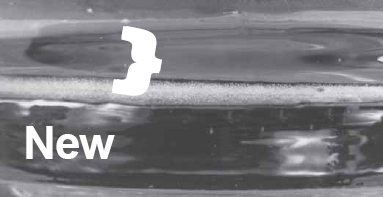 Fig. 3 Closeup view of the font-to-base joint of a new glass lamp magnified about 10X. The light colored band is glue. Under black light, some glue showed green-yellow but most was blue-white.

Fig. 5 Bottoms of old fonts have much larger pegs or wafers of glass. These larger pegs were packed in plaster under a metal connector to join old fonts to old bases.

Fig. 6 New glued collars have gaps between the glass neck and metal collar and usually project out beyond the inner rim of the metal collar. 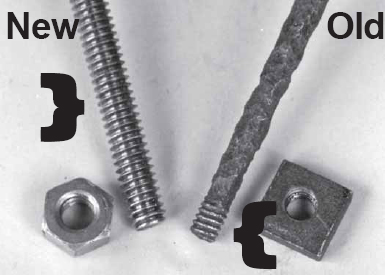 Fig 9. New bolts, left, connecting new hardware are threaded the entire length. Old original bolts have threads on only about 1/2" to 3/4" at the end. Original nuts are square, new are hexagonal. Of course restored and repaired old lamps may have new hardware. 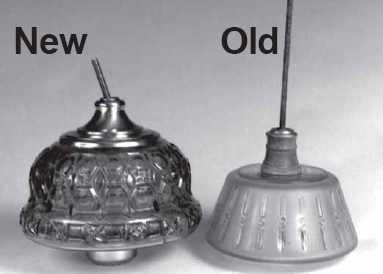 Fig 10. Bolts in new hardware, left, are loose; this bolt is tilting because it has no support. Old metal connections, right, are packed in plaster on glass pegs. The old bolts are set solid in the plaster and do not move. 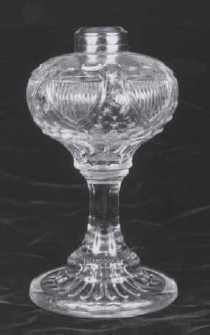 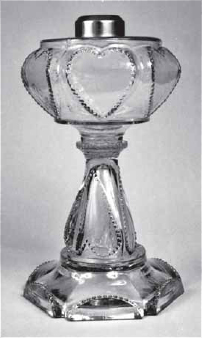 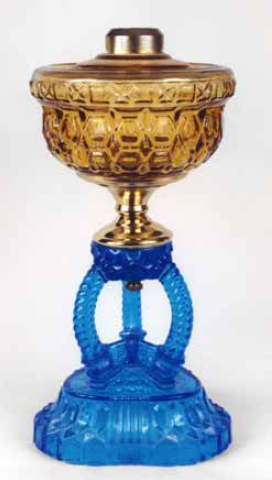 Figs. 11-13 The new Shield and Star lamp in Fig. 11 is 7". The new Sweetheart or Beaded Heart lamp in Fig. 12 is 10". The Sweetheart lamp is available in many colors. The base and font of the new lamps in Figs. 11 and 12 are glued together. One of the most ambitious pressed glass reproductions is the 12½" Cathedral banquet lamp in Fig. 13. The Cathedral lamp is sold in combinations of blue and amber. In old lamps, plaster was used to secure the metal collar; the new collar is glued. The bolt in the new metal connector is fully threaded; old bolts were threaded only on the end. 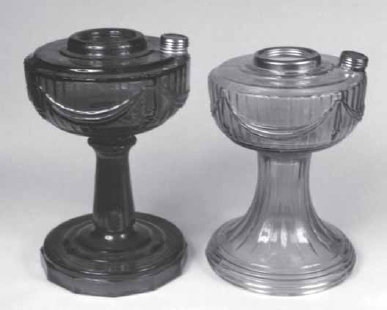 Fig 14. Reproduction Aladdin Lincoln Drape lamps. Both types– the tall and short versions–are reproduced. Both styles of new lamps are glued at the base and font. 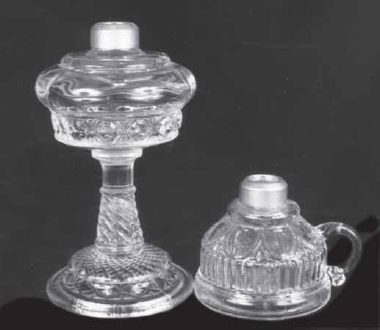 Figs. 16-18 Left: The new Princess Feather lamp is made in both tall and short versions (shown here is the short). Center: New Coolidge Drape lamp. Right: New lamp called Daisy Heart by the wholesaler. So far we have not been able to find an old example. It is currently offered in clear and pink but may have been made in additional colors. All these new lamps are glued together at the base and font.

*denotes color not originally made