The letters KPM can trace their ancestry back to 1763 when they were first used by the Konigliche Porzellan Manufacktur (Royal Porcelain Manufactory) in Meissen. By 1825, the same letters were beginning to be used by the Royal Porcelain Manufactory in Berlin. There have been fakes and look-alike marks almost since the start of original production.

This article discusses KPM marks used after 1825 and will focus on pieces from the mid-1800s through WWI, about 1917. Typical production pieces of this period sell between $300-$5000. The highly sought plaques of this period range from $1,000 to $10,000 and up depending on size, subject and artist.

In addition to the familiar letters KPM, authentic 1815-1917 marks of Konigliche Porzellan Manufacktur also include one of three other symbols: an eagle, a scepter or an orb with a cross. A scepter almost always appears with the eagle and orb marks but may also appear with the letters KPM only. Colors vary but are usually red, brown or blue. All letters and the eagle and orb marks are inkstamped. Scepters are usually hand painted. The only exceptions are marks on plaques. Marks on most plaques are impressed, the most common mark being an impressed scepter and the impressed letters, KPM.

Competing factories have used marks nearly identical to Konigliche Porzellan Manufacktur marks since the 19th century. The letters alone–K, P, M–did not qualify for legal protection under German law. Factories in Thuringia, Silesia and elsewhere were quick to use this legal loophole to stamp their own KPM look-alike marks on their lower priced and less skillfully made copies and imitations.

Typical look-alike pre-1925 marks include the letters KPM in combination with a close, but not exact, copy of the second symbol. For example, there are several KPM marks with various crowns that do not include orbs. The other common technique is to substitute a different letter of roughly similar appearance for an original letter. The original letter K, for example, is replaced by the letter R in several marks producing RPM. Another confusing version has a burning torch rather than a scepter above the letters KPM.

Such small deceptions often sound too obvious to be taken seriously when described in print. But with a little dirt or staining or deliberate scratching, it can often be difficult to detect letter substitutions without a careful inspection. Some genuinely old items with these kinds of look-alike marks are collected in their own right but they are rarely worth more than a small percentage genuine Konigliche Porzellan Manufacktur items.

The letters KPM probably appear in more marks used after 1925 than in marks before 1925. By the 1950s, KPM was used to imply a sense of quality, prestige and age rather than any specific company. Many of the new KPM marks shown belwo also include place names such as Bavaria and Germany which do not appear in early marks. Since the original mark was never registered, it is legal today for reproduction wholesalers to continue using the letters KPM on new pieces imported from China, Japan and Indonesia. 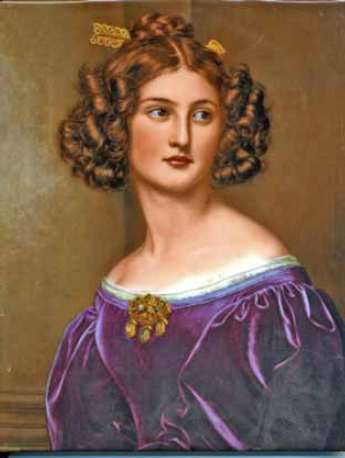 Fig. 1 This transfer decorated porcelain plaque was sold by a reproduction wholesaler ca. 1960-1970s. It is stamped with a look-alike KPM mark. 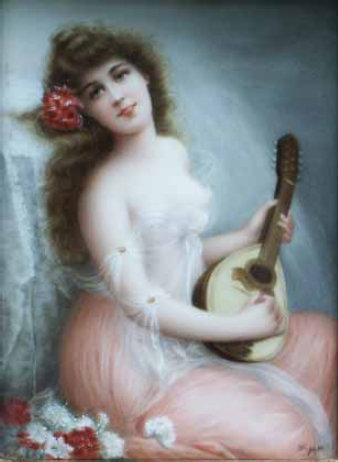 Fig. 2 Original pieces by Koniggliche Porzellan Manufaktur like this plaque are marked with only a very limited number of symbols. 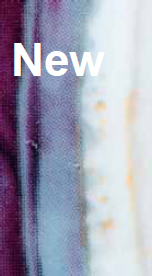 Figs. 3-4 Most all reproductions are transfer (decal) decorated. A pattern of tiny dots will appear in the printed decals. 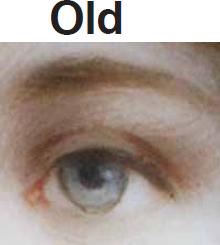 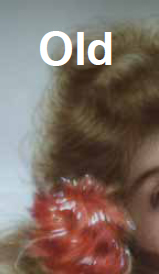 Figs. 5-6 Original KPM is hand painted (Figs. 5-6) and will include fine brush strokes in the paint. High quality originals will show a variety of brush strokes from wide to thin.

Generally, in addition to the letters KPM, most authentic marks (for pieces made after 1825) also include an eagle, a scepter or an orb with a cross. Unless one of those additional symbols appear with the letters, the mark is not authentic Konigliche Porzellan Manufaktur. 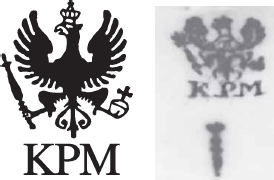 Line drawing of the Prussian eagle with letters KPM, above left. The letter(s) F or FR may appear in the eagle's breast. The eagle and letters are ink stamped and usually red, brown or blue. The scepter almost always accompanies the KPM and eagle mark and is usually painted when appearing with this mark. 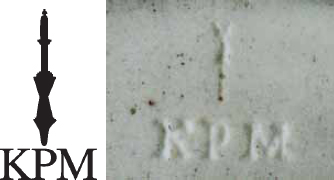 When appearing with the eagle or orb, the scepter is usually painted. Scepter marks on plaques, though, are almost always impressed, not painted or ink stamped.

Usually stamped in red, brown or blue. Usually, but not always, includes a painted scepter. Scepters may appear at varying distances and positions around marks, not not only directly above or below.