New Iris (Iris and Herringbone) were found in the southeastern states, but might be more widespread. Reproductions of the beaded edge 4½" berry bowl (shown here) and the 6½" tumblers were confirmed in Georgia, North Carolina and Tennessee.

Authentic pieces were made by Jeanette Glass Company. The original factory name was Iris but it is now commonly called Iris and Herringbone. Pieces were first made in clear crystal beginning in 1928 to around 1932. A limited number of shapes were made in crystal in the 1950s and vases were produced into the 1970s. Some shapes were also made in pink and green. Almost the whole line was also made with an iridescent finish during the late 40s to 1960s.

Crystal is the most collected because there are enough shapes to build a whole table set. Outside of a limited number of shapes in rare colors, crystal is the most desirable color and brings the best prices. Iridescent pieces are the least in demand and have the lowest value1.

Another easy to see clue is the circle in the bottom of the dish. Turn the bowl over look at the bottom from the outside. In the new bowl, the circular area around the hobstar is outlined by an incised line or crease (Fig. 3). This can easily be felt with your fingernail. The original bowl does not have this line (Fig. 4). In the original, the circle effect is created by stopping the herringbone pattern and beginning a smooth surface. The glass is perfectly level between the herringbone pattern and the smooth area without the pattern.

Overall, the molding on the original is much sharper and crisper. This means the diagonal herringbone pattern catches the light more on the original and it definitely has more sparkle and appears brighter. Although this is obvious when held side by side with the reproduction, it is not as a reliable indicator of age as the circle and flower. A dusty or dirty original could look as dull as the reproduction.

Dimensions and weights of old and new are virtually identical. There was no reaction under long wave black light from either old or new.

Tumblers were not available for examination. New tumblers are said to be smaller across the mouth than originals.

1. Gene Florence, author of Collector's Encyclopedia of Depression Glass, has reported some persons are removing iridescence to increase the price of Iris. Iridescent soup bowls, for example, sell for about $50. The same piece in clear crystal brings $150. Florence says pieces with their iridescence removed appear cloudy especially the flowers. 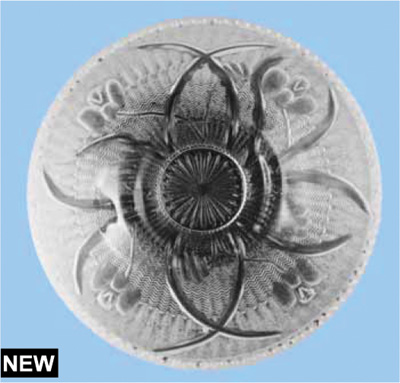 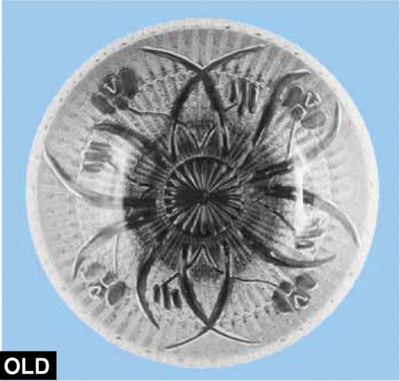 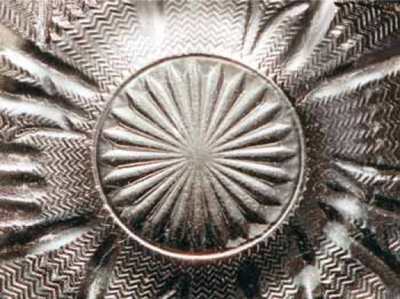 Fig. 3 (New) The hobstar in the bottom of the new bowl has a distinct circular line-like crease around the edge. A fingernail will easily fit into the crease. As viewed from outside bottom. 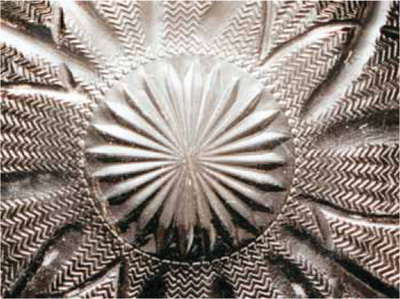 Fig. 4 (Old) The hobstar in the bottom of the old bowl is not surrounded by a line or crease. A circle is formed where the herringbone pattern stops and the smooth glass begins. As viewed from outside bottom. 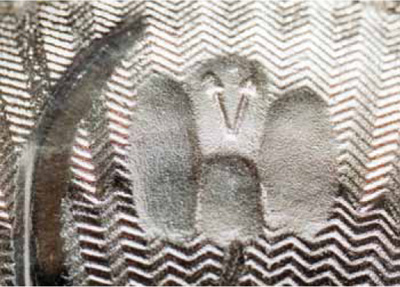 Fig. 5 (New) The surface of the flowers on the new bowl are pitted and coarse with a dark gray frosted appearance. 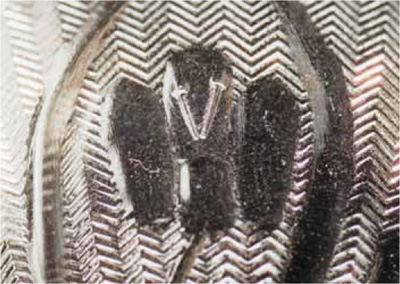 Fig. 6 (Old) The surface of the flowers on original bowls is perfectly smooth and transparent with no appearance of frosting. The black background on the other side is transmitted perfectly through the clear glass.