New and old head vases appear to be virtually identical in construction. Both are made of relatively inexpensive ceramic material. There are no permanent marks on the new pieces. Some vintage head vases were marked, many others were not.

Head vases were originally sold as flower holders primarily in the 1950s-60s. Most were very inexpensive when new and were made primarily in Japan. Interest has grown in head vases and prices for many examples now range from $50-$300 with rarities selling for $1,000+. 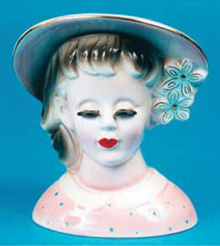