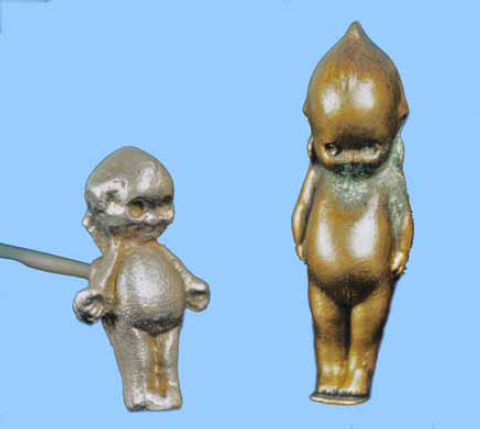 Anything small enough to fit on a shank seems to eventually be destined to be offered as a hatpin. The faked pin, left, is made from a modern Kewpie-like charm; an original Kewpie hatpin is shown on the right

An authentic hatpin has three distinct parts: 1) the head, 2) the shank, and 3) the finding. The head, also called the ornament, is the decorative part of the hatpin. The shank is the pointed metal shaft the head is mounted on. A finding is a small piece of metal used to hide the joint where the head is mounted on the shaft.

There are two basic things to look for in judging hatpins: How is the head mounted to the shank and what kind of finding is used. Typical old original findings are shown in Figs. 1-3 and illustrated in Figs. 6 and 6-A.

Authentic old findings were carefully matched to the heads to give strength and conceal the shank to head joint. In some hatpins the finding is built into the head but most findings are separate distinct pieces. Genuine hatpins should only have one neatly fitted finding. Be wary of any pins (Fig. 9) that have more than one finding.

Authentic findings are almost always fastened to the shank by crimping; you should never see any signs of glue or solder. Many new findings are simply glued to the bottom of the head in an attempt to appear legitimate. Here, they don't contribute to the strength of the joint, they just hide more glue and solder typically used to fasten the head to the shank. Sloppily glued pins are easily detected with your eye or a magnifying glass. Use a black light to detect the glue in more carefully prepared fakes.

When a buyer questions a seller about solder or glue, some sellers attempt to explain them as "repairs" or "reinforcements" while maintaining the parts are old. The individual parts may very well be old but they must be joined in a logical way with an original finding to constitute an authentic antique hatpin in original condition. If the finding is missing and there is visible glue or solder it's nearly certain the hatpin is either new, a "home-made repair" or an intentional fake such as the Kewpie.

Be sure to compare the finish and color of the shank with the finding and the head. Original hatpins were important fashion statements and head, shank and finish were a carefully coordinated total design. Beware of a gilded head mounted on anything other than a gilded, carat gold, or yellow brass shank. You should never expect to find, for example, a bluish gray tempered steel shank with gold or silver colored heads.

It's also logical to be suspicious of a marked 14K bauble on a silver-colored steel shank. Nor would it usually be acceptable to find a common base metal ornament on a gold filled shank. Such inconsistencies are almost always a sign of a fake.

Authentic period shanks are most commonly made of either steel or brass but were also made in nickel, karat gold and sterling silver. Tin, copper and pewter were never used for shanks and stainless steel was not used before the first quarter of the 20th century. Japanned (black lacquer) shanks were used on the most inexpensive period pins.

The majority of original shanks are nickel plated or finished in a silver color. Higher quality heads and heads set with genuine stones are usually mounted on gold gilded shanks. Most new shanks are unmarked but some new steel pins are marked "REX". These pins are by a contemporary hat pin jeweler who marks his work to avoid confusion with old pins (Fig. 8).

Since longer pins generally bring higher prices, it is a common trick to replace shorter old shanks with longer new shanks or longer old shanks. Comparing the color and finish should help prove whether the shank is original, new or a replacement.

The majority of hatpins were made from about 1850 through the 1920s with their popularity at a height between 1890 and 1925. Their manufacture was made possible by the invention of a pin-making machine around 1832. As fashion changed from stringed bonnets to stringless hats the low cost machine-made pins became a necessity.

The golden years of the hatpin, 1890 to 1925, were captured in the rich styles of Art Nouveau, the Aesthetic Movement, Arts & Crafts, and Art Deco. Important designers and makers such as Rene Lalique and Gorham Silver all made hatpins in their own distinctive styles. With the Machine Age and growth of modern cities in the last half of the 19th century, women came out of the Victorian parlor and into the urban workplace.

The shocking use of public transportation by "emancipated" women led to the "hatpin danger" laws ca. 1900-1915. In some cities, hatpins longer than 9" were banned with proposals that hatpins over 9" be registered as deadly weapons. 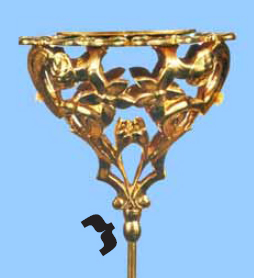 Fig. 1 Genuine hatpins have findings that blend into the design of the head. 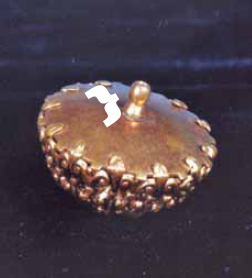 Fig. 2 Genuine head with finding attached ready to be placed on shank. 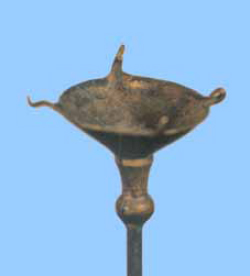 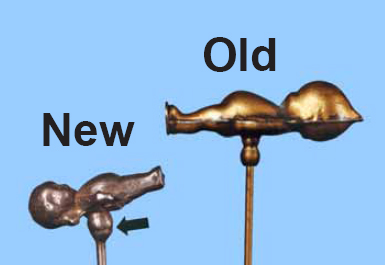 Fig. 4 A blob of solder substitutes for a finding on the fake at left. The original finding on the authentic piece, right, keeps the figure at a perfect right angle to the shank and hides the shank to head joint. 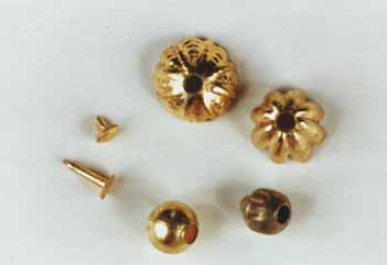 Fig. 5 New odds and ends commonly used as "findings" on faked hatpins. Most were purchased as beads or costume jewelry parts. 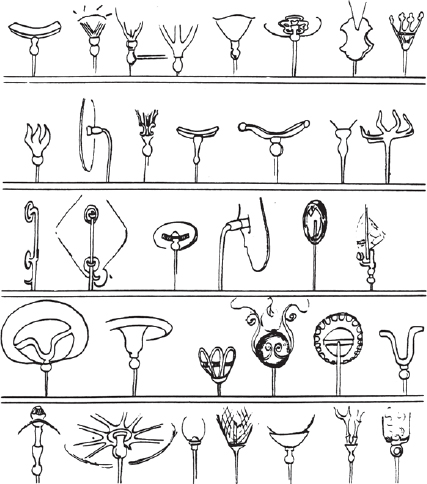 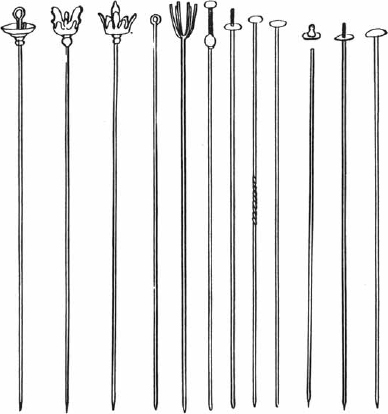 Fig. 6-A A variety of original findings mounted on shanks. 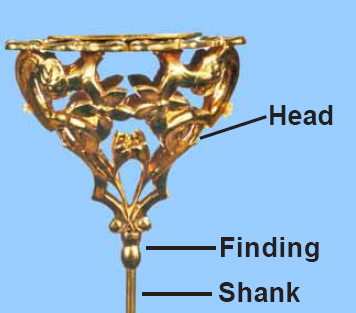 Fig. 7 The three basic parts of a hatpin. 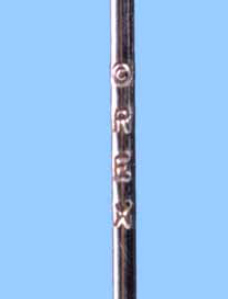 Fig. 8 Closeup of new shank marked ©REX. All shanks with this mark are made by a contemporary hatpin maker. 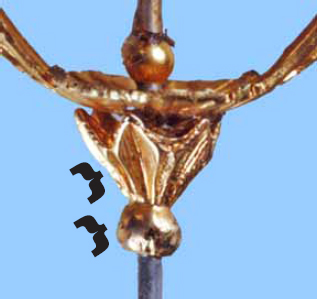 Fig. 9 Many fakes like this one use two or more pieces to conceal the shank to head joint rather than a finding. An original finding is always a single one-piece construction, not multiple pieces. 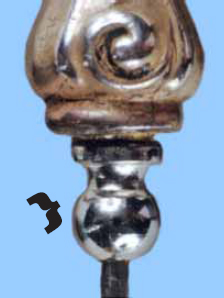 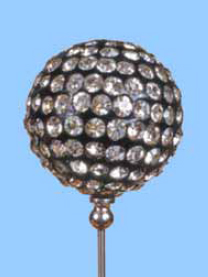 Fig. 11 Faked hatpin made with rhinestone bauble taken off a piece of costume jewelry. 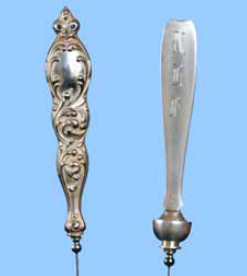 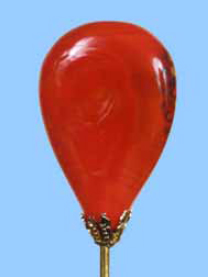 Fig. 13 New hatpin made with tumbled and polished stone glued into new finding. 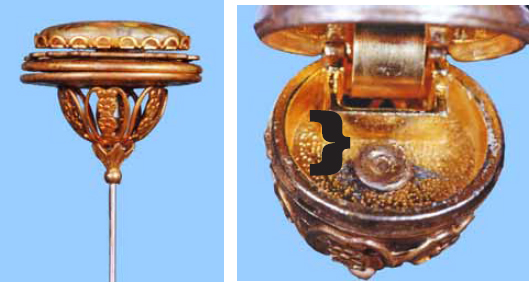 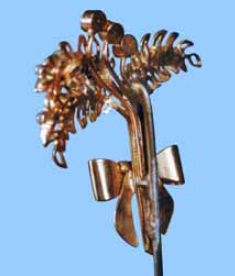 Fig. 16 A piece of costume jewelry soldered to a new shank. 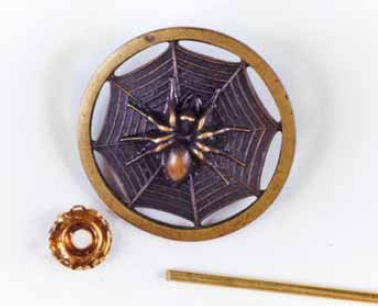 Fig. 17 The pieces used in a typical faked hatpin. In this case, the head is a genuinely old brass button, a new brass shank and a brass trim piece from the bead sectin of a craft shop. 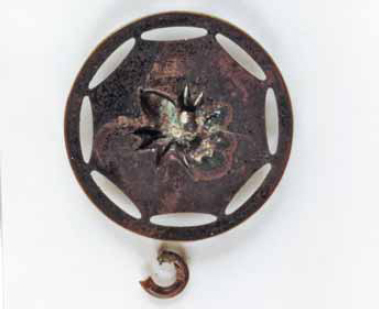 Fig. 18 Step one, remove the button's sewing loop to hide its real identity and function. 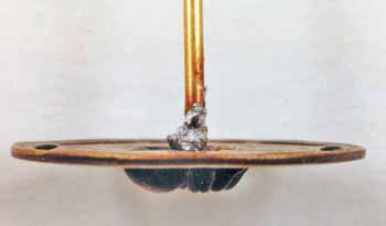 Fig. 19 Step two, solder new brass shank to the back of the button. 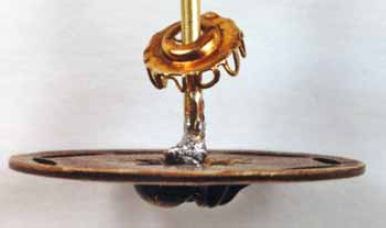 Fig. 20 Next, slide new brass trim, which imitates a finding, over the solder joint. Glue or solder trim piece to hide the joint between head and shank. 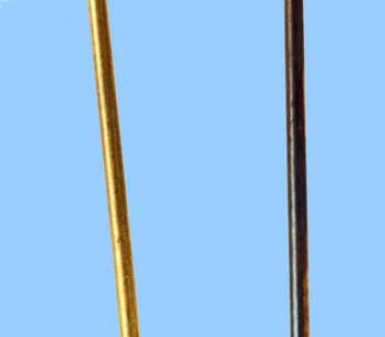 Fig. 21 Finally, oxidize the new pin to give it the look of old patina. New pin before oxidation, left; darkened finish after oxidation, right. 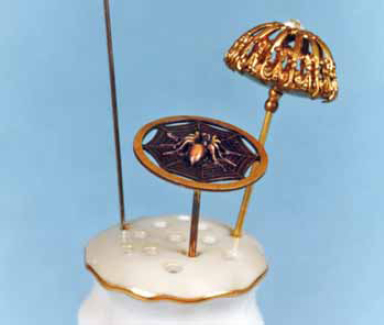 Fig. 22 The faked pin ready for a price tag. It is displayed with old pins to maximize confusion.