The Pattern 1935 German Army Dress Dagger is one of a series of German daggers from the World War II era. It was adopted May, 1935 and ceased production May, 1943. By war's end in 1945, these daggers were already being reproduced to sell to souvenir-hunting GI's.

The earliest reproductions were fairly crude and often made up of leftover parts. Complete daggers began to be made in Germany and Spain in the 1950s and 1960s and then in England during the 1970s. Unlike early copies, later reproductions were high quality. But since original daggers were hand finished by skilled German craftsmen, you can date daggers by studying their construction.

All original dagger blades were made in the German city of Solingen by one of approximately 42 firms. Most, but not all original blades, carry one of those company's names. Original marks were etched or stamped; copies are also marked both ways. Many fake blades include original company names, so begin your examination of the blade by studying the trademark.

There are three marks never found on original Pattern 1935 daggers. They are the RZM mark, "Berlin" and "Germany" (Figs. 2-4). Next, study how the trademark is applied. There are three flats to each side of the blade and the mark should be perfectly centered over the flats (Figs. 5-7). Be sure to study the entire trademark carefully. Many fake blades include trademarks that are virtually identical to the originals. The fake mark in Fig. 8, for example, leaves out the letter "I" in Solingen.

The blade flats on old blades are well defined and symmetrical; new flats are irregular and unequal (Figs. 6, 7, 9). If the blade has an etched pattern, check that the pattern is centered (Fig. 9). Don't be impressed with swastikas or unit names which are frequently included on the new blades (Fig. 10). Occasionally, new or old daggers are forged with an engraving of an alleged owner's name. Be very cautious of such "personalized" or "presentation" daggers.

Assuming the dagger can be taken apart, begin your examination with the tang. The tang on new blades is typically flat-sided and tapers from top to bottom (Fig. 11, left). Original tangs are round and straight, about the size of a wood pencil (Fig. 11, right). Old tangs very rarely show any grinding marks; new tangs are usually heavily ground (Figs. 19-20).

The shape of the tang is reflected in the grip. The flat sided opening in the new plastic grip, Fig. 14-A, is made for the flat-sided shape of new tangs. The rounded bulge in original grips, 14-B, -C, -D, matches the shape of the old rounded tangs. There are three main types of original grips: B-solid celluloid; C-a celluloid shell over wood; D-celluloid shell over plaster. Original grips made of other materials are possible but rare. Colors of the old celluloid grips are white to deep orange; reproduction plastic grips are usually mustard yellow.

There are also reproduction scabbards. New scabbards are cast as one piece and capped with a separate knob which produces a seam (Fig. 16). Original knobs and scabbards were made as one single piece. There is no seam on an original scabbard (Fig. 17). New scabbards also have a distinct swirl pattern to their pebbled surface. The pebbled surface of old scabbards is not swirled (Fig. 18). Finally, examine the scabbard bands. Bands on new scabbards are loosely pressed on and light passes through gaps between the bands and the scabbard. Old bands are brazed to the scabbard and any gaps are filled with metal; there are no gaps for light to shine through.

Throughout your examination, keep in mind that original daggers are consistent in quality. For example, Fig. 19 shows a correct tang shape but the deep grinding marks and unequal blade flats mark it as a forgery. In Fig. 20, the tang is also the correct shape but again note the unequal blade flats and the sloppy polishing that extends onto the tang – definitely not the work of a master German craftsman. Trademarks, blade flats and grips must all be of high quality throughout for any piece to be declared an authentic Pattern 1935 Dagger.

Fig. 1 Parts of a typical dress dagger: A-Blade, the blade is the entire piece of metal from the tip to the bottom of the tang; B-Tang (blade tang), the part of the blade that fits into the grip; C-Blade washer; D-Crossguard; E-Grip; F-Pommel.

Figs. 2-4 These are commonly seen marks never found on authentic Pattern 1935 blades. One is the RZM trademark, far left. Any mark with the word "Berlin" black arrow, is new because all old blades were made in Solingen, white arrow. All blades marked "Made in Germany" like Fig. 4 were made after the war. 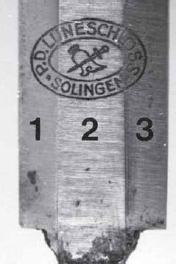 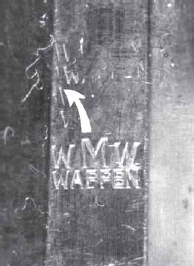 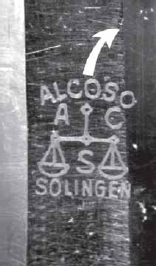 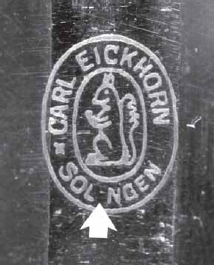 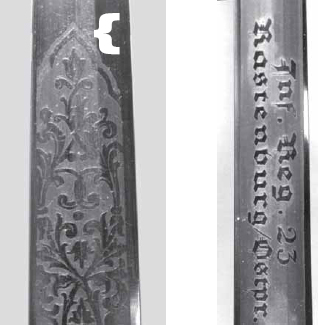 Fig. 9-10 Note the unequal blade flats and how far off center the new etching is in Fig. 9. New etchings include emblems such as swastikas and regimental or unit names similar to Fig. 10. 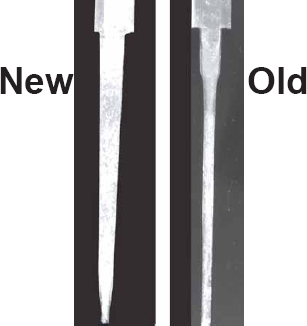 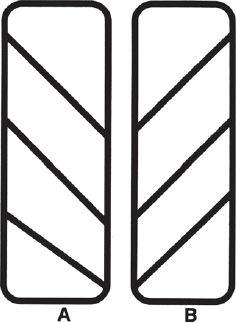 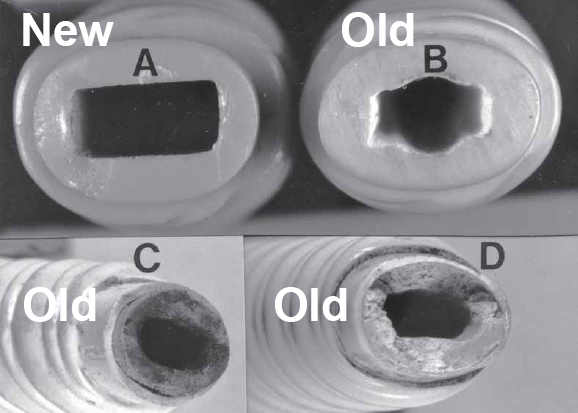 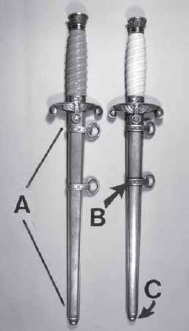 Fig. 15 The scabbard, A, is the metal sheath which holds the dagger. Arrow B points to a scabbard band; Arrow C points to the scabbard knob. 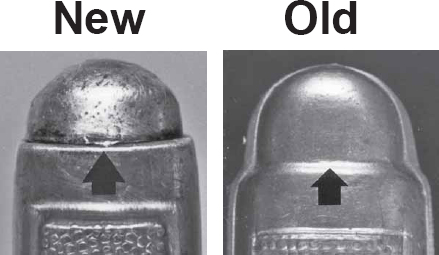 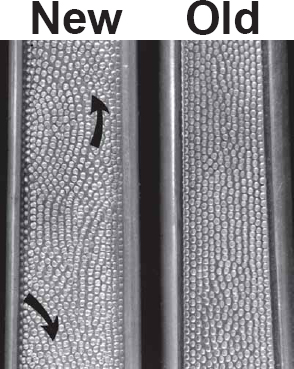 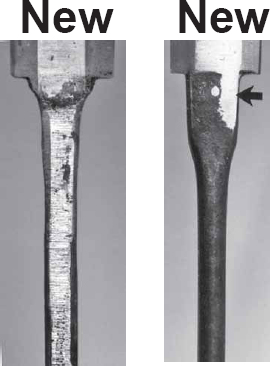 Figs. 19-20 Two new tangs with the correct shape. But the deep grinding marks, poor polishing and unequal blade flats are signs of forgeries, not authentic blades.