On January 28, 2001, a buyer in Chicago paid $1200 for a set of four bowls and plates (Fig. 1) marked R. Lalique, France (Fig. 2) Unfortunately, the frosted glass bowls and plates were made in the Czech Republic (formerly Czechoslovakia), not France and the Lalique marks were forgeries.

Frosted, or acid etched, Czech glass is often mistaken–or deliberately misrepresented–as Lalique. Many pieces, like those sold at the Chicago auction, often carry forged Lalique marks. Some of the misrepresented Czech pieces are genuinely old dating from the 1920s and are collectible in their own right. Other pieces are present day reproductions made in the original 1920s molds.

It's important to be able to separate Lalique from lookalike Czech products and to identify those Czech pieces reproduced since the mid-1990s. Fortunately there are several relatively easy steps to making these tests.

Many original Czech molds from the 1920-30s era have been put back in production since the fall of Communism in the early 1990s and the return to private factory production. The palm tree plate and bowl and the cherry vase shown in this article (Fig. 1, Fig. 5) are typical of new pieces made from old molds. Original examples of those pieces were made by Joseph Inwald, shown in a present-day museum display in Fig. 3.

One of the most useful clues in dating frosted Czech pressed glass is the presence of mold seams. Pre-1939 Czech pressed glass was almost always hand finished to remove mold seams. Seams were almost always polished out on stoppers, feet, bases and rims. Seams in the body blended into the design and are difficult to find. Raised portions of some designs are polished to create contrast with the frosted surfaces.

Many, but certainly not all, original Czech frosted pressed clear glass made between the two World Wars was marked. When pieces were marked, the most common marks were molded. The most common original molded mark is simply the word "Czechoslovakia" or with slight variations on the spelling. (Remember, we're talking about frosted pressed glass, not art glass or the decorative perfumes.)

Any Czech mark on frosted pressed glass that is not molded–such as an engraved mark or an acid etched stamp–should be viewed with suspicion. Keep in mind that those types of forged marks may appear on new or genuinely old pieces.

Although the presence of a molded mark is not an absolute guarantee of age, it is generally a positive indication of age. This is especially true now that the former Czechoslovakia is officially known as the "Czech Republic" which is the mark that now appears on most products if only as paper labels.

And don't overlook the obvious. Pieces represented to be 60-70 years old should have an appropriate amount of normal wear. What is normal wear? Normal wear is the collection of scratches that accumulate one by one over many years of normal use. Scratches from normal wear are random in direction, of unequal length and various depths. Artificially created wear produced all at once, either by tools or hand rubbing some abrasive like sandpaper, tend to produce parallel lines in a repeating regular pattern of equal depth.

Even vases and non-tableware items should show some signs of wear. Original Czech frosted glass was relatively soft and scratched fairly easily. Simply dusting a shelf piece once a week would be enough to produce signs of wear over 60-70 years of repetition

Don't assume any one particular Czech pattern is "safe" from being reproduced. Old molds are constantly being discovered and being returned to production. Although the volume of glass produced has varied over the years due to war, political and economic conditions, many pieces of Czech glass have been in almost continuous production since the 1920s. The three periods of greatest volume were 1920-1938, early 1950s and since 1990. Most of the pieces shown in the 1950s catalog shown in Fig. 14 on page 29, for example, were made in the 1930s as well as the 1990s.

Is it Lalique or Czech?

All clear frosted pre-1945 pressed Lalique will fluoresce yellow, and sometimes peach, under long wave black light. All clear Czech glass–pre-1939 or modern–fluoresces blue/white. After the war, the formula for Lalique changed. Authentic clear pressed Lalique made after 1945 fluoresces blue-white the same as all Czech cleaer frosted glass, new or old.

Because so many records were destroyed in the war, much remains to be rediscovered about original Czech glass. Lalique, on the other hand, has been thoroughly documented and has a well known history. All authentic Lalique patterns and shapes are easily verified by looking through Lalique catalogs and reference books. If you can't find it listed, it's very doubtful it's Lalique.

Although virtually all original pressed Lalique was marked, marks are the least reliable indicator of age3. Early Lalique marks are widely forged on Czech glass as well as Lalique made after 1945. The black light test, glass quality and amount of hand finishing are all more important in determining authenticity than marks. 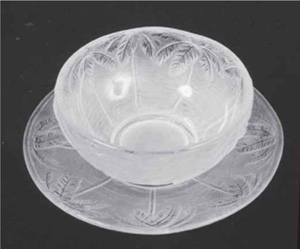 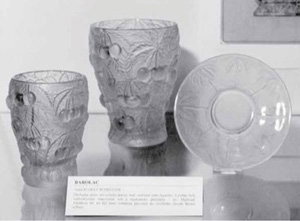 Fig. 3 Museum display of ca. 1930s Barolac glass at Teplice, Czech Republic. These are original cherry vases and palm tree pieces made by Joseph Inwald from Dubí u Teplic, a glass center near Teplice. The cherry vase in the center and the plate with palm trees at right are both back in production. Museum photo courtesy Robert and Deborah Truitt 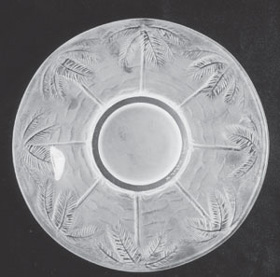 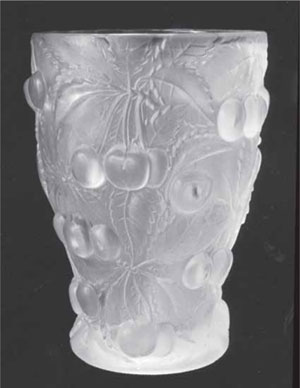 Fig. 6 Frosted clear glass horse head made today in Czech Republic, left, and original ca. 1929, Lalique "Longchamps" hood ornament. The new Czech piece wholesales for about $125 from importers. Original Lalique frosted clear glass Longchamps sell for $2,500 to $3,800. The new Czech piece has been in the market since the early 1990s. There are also new Czech copies of other Lalique hood ornaments including Lalique's Victoire and Vitesse. The new piece is gray and chalky with obvious mold seams. 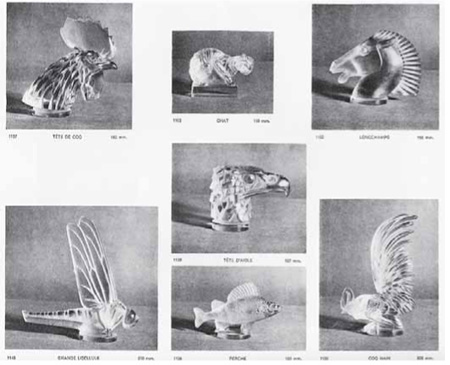 Fig. 7 One of the best references on original Lalique is the 1932 catalog reprint. A sample page from is shown above. Many figures available as paperweights were also available as radiator ornaments. The catalog is available from most retail and online book sellers for under $20. Lalique Glass : The Complete Illustrated Catalog for 1932, paperback, 9″ × 11″, 160 pages. Dover Publications, ISBN: 048624122X. 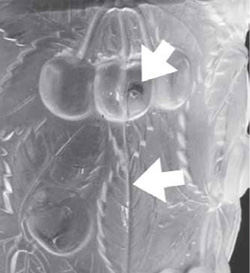 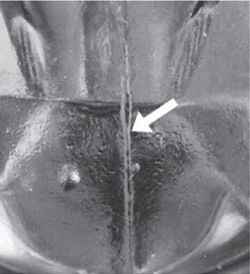 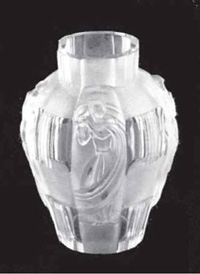 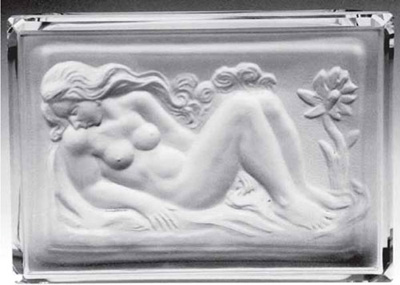 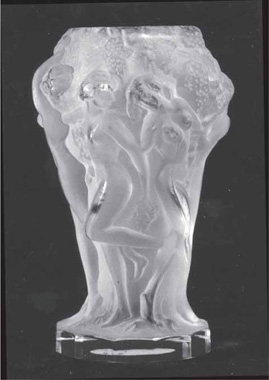 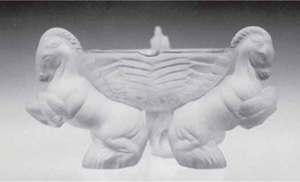 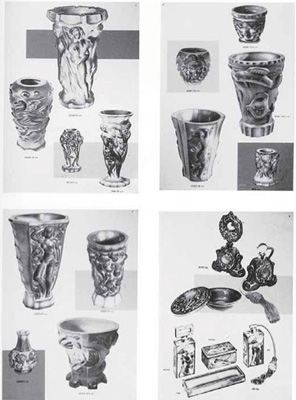 Fig. 15 Catalog of Czech glass made in the 1950s from original 1930s molds. Most of these molds were back in production during the 1990s.

Although most Czech firms made clear frosted press glass pieces between the wars, the company of Joseph Inwald created an entire line of frosted glass. Inwald named the line "Barolac". Some original Barolac pieces are opalescent as well as frosted. An original Barolac catalog is shown in the upper center in the collection of Inwald catalogs, Fig. 16.

There is some confusion as to the relationship between the 1920-30s British merchant John Jenkins and the name Barolac. Inwald glass will sometimes be found with a paper label having both Barolac and John Jenkins names. Some authors have interpreted these labels to mean that Barolac was a trade name developed by Jenkins but that is not correct. Although Jenkins obviously worked very closely with the Inwald factory, the exact relationship is not fully known at this time. 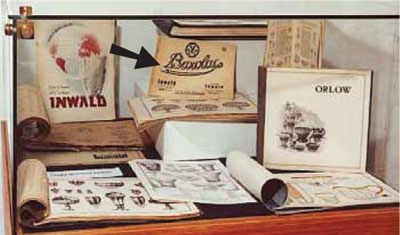 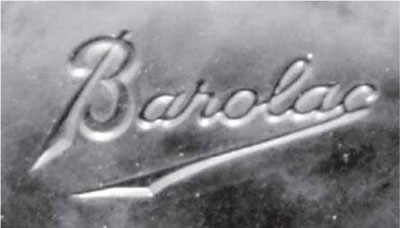 Fig. 17 Script mark found molded on some Barolac glass. Other pieces are marked Czechoslovakia in molded block letters. Not all pieces were permanently marked.