Silver plated figural napkin rings are exclusively an American product of the Victorian era. First patented in 1869, figural rings soon filled entire pages of Victorian silver plate catalogs. By the mid-1880's, Reed and Barton offered 43 figurals, Meriden 35, with other companies like Tufts and Simpson-Hall-Miller offering many others. Figural rings were popular until the turn of the century. After 1900, fewer and fewer are seen in silver plate catalogs until they are entirely gone by the first decade of the new century.

Each family member had their own ring, usually received as a gift, with their initials or name on it. The name not only showed possession but was a matter of sanitation as well. The vast majority of Victorian families did not wash their cloth napkins after each meal but only after a number of uses. As late as 1898, an author on etiquette writes of "...many who hold that a napkin should be used but once and must be laundered before reappearing on the table," as a distinct minority.

Many figural rings were intended to represent certain aspects of the owner's personality, character, pets, occupation or interests. Others figures represent characters or themes in nursery rhymes and stories, popular sports and hobbies and other Victorian interests.

Prices for original figural rings can range from $75 for simple figures to $1500 and higher for rare figures or elaborate rings that include containers for condiments or other accessories such as glass flower vases. Moving parts such as wheels also increase the value.

The new rings being made by Mackie are sold as new in his shop in Portland, Oregon and by mail. As shown in the following photos, most are so close to the originals that the touchmark is often the only detail to separate the originals from Mackie's reproductions. 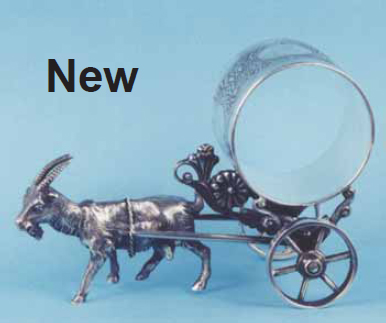 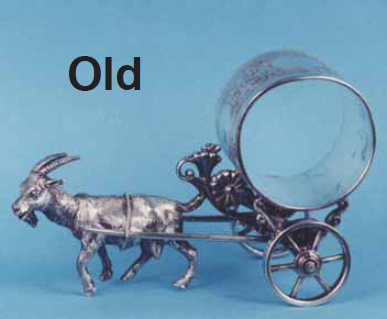 Figs. 1-2 A series of newly made figural napkin rings is so similar to old originals it is virtually impossible to distinguish new from old when viewed at arms length. The original goat, (Fig. 2), was made by Meriden; the new ring, (Fig. 1) is made by James Mackie, a Portland, Oregon silversmith. Mackie currently offers 23 different new figural napkin rings. 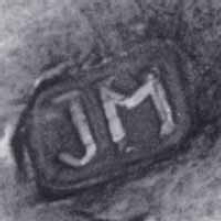 Fig. 3 Touch mark of James Mackie (JM) who is making new figural napkin rings. Location of marks vary; some are on the base, some are on the ring. Many, but far from all, old rings are marked with much larger company marks. ACRN photo 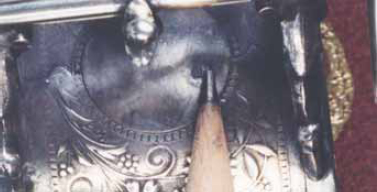 Fig. 4 The JM touchmark is exceptionally small. This close up shows the size of the mark in relation to an ordinary lead pencil. Even at twice normal size the mark is barely legible. ACRN photo 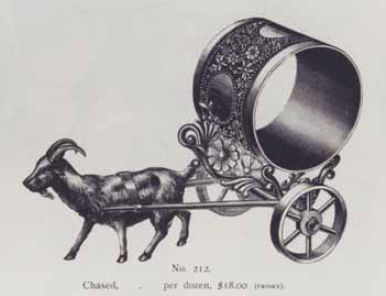 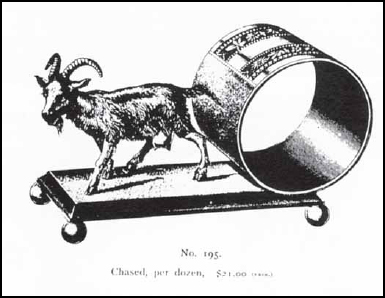 Figs. 5-6 There is considerable variation among old originals. Figs. 5 & 6 above show two versions of original goats used by Meriden. Fig. 5 from the 1886-87 catalog; Fig. 6, from catalog of 1882. Note differences in the front legs among Figs. 5 & 6 and Figs. 1 & 2 above. Such variations among originals make it difficult to separate old from well-made reproductions on details alone. 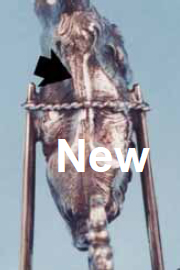 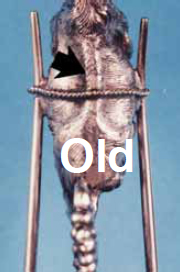 There is virtually no difference in the quality or finish between old pieces and Mackie's reproductions. Close ups above show finish along the casting seam of goats' backs and other details. 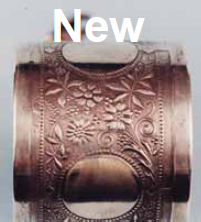 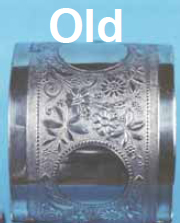 Figs. 9-10 Close up of pattern of the ring pulled by each goat. Again, virtually no difference between new and old. Both patterns are correct when compared to the ring shown in original catalog illustration in Fig. 5.

Fig. 11 New wheel, left; old wheel right. All wheels on Mackie's reproductions turn as smoothly as originals. There is a slight irregularity on the new hub but not much more than might normally be expected in an original. 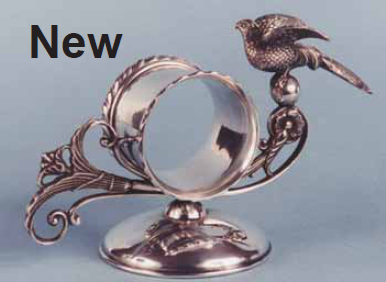 Fig. 12 (New) This new figural ring by Mackie has the JM mark on underside of domed base. Note details in feathers. 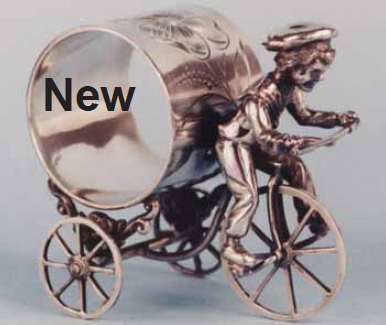 Fig. 13 (New) The boy on the tricycle is the only Mackie ring that shows some slight problems with details. These can be seen in the casting flaws in the spokes in Fig. 14. These particular wheels are also much thinner and weaker than the larger, more sturdy wheels found in most originals as well as other new Mackie pieces. 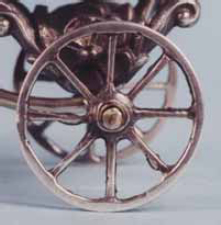 Fig. 14 Detail of tricycle wheel showing casting flaws along some spokes. These were the only obvious flaws in the new Mackie samples that were examined. 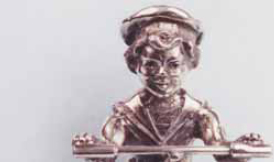 (Original manufacturer if known is shown in parentheses) 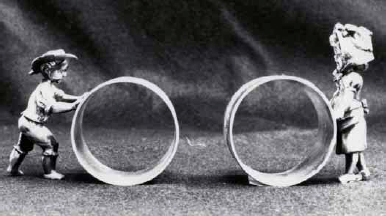 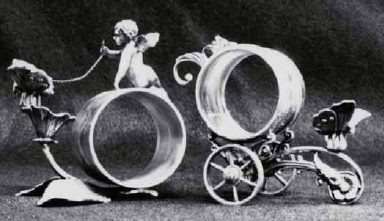 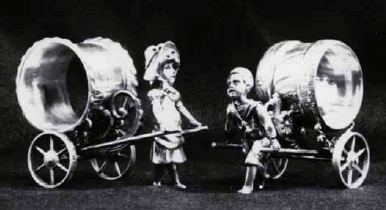 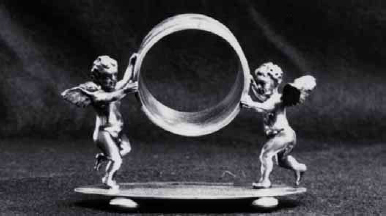 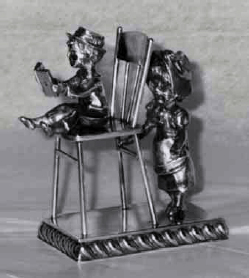 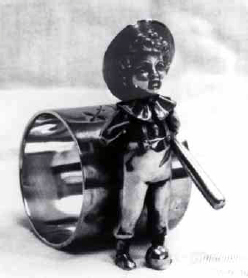 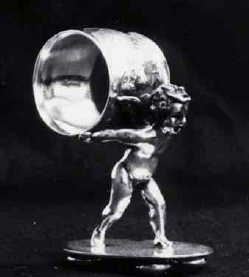 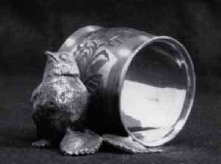 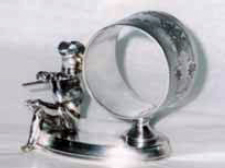 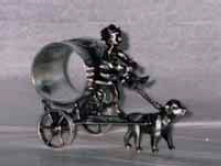