Reinert said he has received hundreds of inquiries about fake badges, belt buckles, shotguns, shackles and other similar items relating to Andersonville Prison. A fake Andersonville Guard badge was among the Civil War-era frauds reported and illustrated in an ACRN article. All items purporting to be insignia, badges, tokens, cuffs, irons and similar items marked Andersonville should be regarded with extreme suspicion.

Andersonville held Federal troops captured by the Confederate States during the American Civil War. The 26 acre site located in Georgia was occupied by 32,000 prisoners. Lack of basic sanitation and inadequate food resulted in the deaths of 12,884 soldiers.

Civil War prisoner-of-war camps run by both Federals and Confederates were notoriously overcrowded, filthy and almost always short of food and medicines. 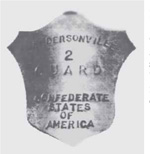 Fake badge stamped "Andersonville Guard 2, Confederate States of America". Marked "coin silver" on the reverse. No badges like this were ever issued in silver or any other material.