Babes in the Woods plates marked Royal Doulton have been seen in online auctions, flea markets and antique malls. All the ones offered so far have been mounted in gold-colored plate frames about 12" in diameter. So far, only the framed plate in Fig. 1 has been found. No other new shapes are known.

Royal Doulton made 24 different Blue Children, or Babes in the Woods, scenes. All the scenes are done in blue and white and feature children–usually small girls–children with women, or a single woman, placed in naturalistic or "wooded' surroundings. The decorations appear on a variety of shapes including plates, oval and round plaques, a variety of vases, biscuit jars, jugs, pots and toilet sets.

All Royal Doulton Babes in Woods decorations were applied as printed transfers with handpainted details and backgrounds. The series was made from 1890 to 1930. Pieces made before 1902 are sometimes, but not frequently, signed by the artist who painted the background. Earlier pieces generally have more hand-work than later examples.

Both Royal Doulton's and Royal Bayreuth's Babes in the Wood pieces were introduced at about the same time, ca. 1890. Royal Doulton made the pattern up until 1930, with the majority of pieces produced between 1890 to 1915. Royal Bayreuth's production appears to have all but stopped during WW I, ca. 1915.

Transfers of Babes in the Woods look-alike decorations were also available to turn-of-the-century china painters. You may find these decorations on a wide variety of vintage china blanks made by various manufacturers.

So how do you catch the fakes? The most obvious problem with the new fake in Fig. 1 is the mark. Virtually all original Royal Doulton Babes in the Woods pieces are marked with a transfer under the glaze (Fig. 9). The most common color of transfer mark found on Royal Doulton Babes in the Woods is probably green, but the mark can also be other colors. The color of the mark is not a reliable test of age. The most common general exception is original Royal Doulton wall plaques which were left unglazed on the back. These pieces are typically marked on the unglazed bisque surface with an ink-stamped mark, not a transfer.

The typical Royal Doulton underglaze transfer mark is virtually without exception perfectly legible. You should see a crown on the lion's head; prongs of the crown are tipped with globes "ROYAL DOULTON" and "ENGLAND" are clear and obvious.

By contrast, the faked plates have crude, poorly formed, deliberately illegible marks. England, for example, is completely smudged and distorted. Like other faked marks, this example is carefully crafted to suggest a famous mark without being an exact copy. If "England" was clearly legible, it would legally represent the country of origin. Assuming the new plates are made either in Asia or America, the use of England would be in violation of U.S. customs laws.

This tactic has been used on many recent faked marks such as new brass scientific instruments, new Dazey churns and various types of art glass. Trademarks on new Dazey churns from overseas, for example, are exact copies of original trademarks except where "St. Louis, U.S.A." appears in the old mark. This area is carefully and deliberately smudged to make U.S.A. illegible. That way, Customs rules can be met by listing the true country of origin, either China or India, on removable paper labels.

The other major difference between new and old is the ceramic body. Original Royal Doulton Babes in the Woods decorations are on an earthenware, or clay, body fired at high temperature. This is a hard, dense body. The new plate, as shown in Fig. 1, is made of a soft-bodied slip similar to the lightweight bodies used in hobby-grade ceramics classes.

The flat part of an authentic Royal Doulton plate, the area encircled by the raised rim, is almost perfectly flat. The back of the new plate is wavy and almost bubbly. This is an indication the piece was created by pouring liquid slip in a mold. The new rim is also unusually high and strangely concave, forming a distinctive overhanging ledge (Figs. 13 and 14).

Authentic Royal Doulton Babes in the Woods plaques were made in two shapes, round and oval. An authentic oval example is shown in Fig. 15 . True plaques differ from plates in that plaques are perfectly flat on the back, without any rim (Figs. 16 and 17). True plaques are much rarer than plates and sell for three to ten times the amount of plates.

The frames on all the new plates found so far have been particularly low quality. Most buyers assumed the frames were wood, but they are not. They are cast resin, or plastic, carefully molded with wood "grain" to resemble painted wood. Examine the frames carefully, and you'll see various pits, holes and casting flaws typical of molded plastic, not painted wood.

Another unusual feature of the new frames is how the new plates are attached. The new plates are permanently attached with a quarter-inch wide bead of glue (Fig. 18). Plates and plaques of any quality, new or old, are virtually never permanently attached to a display frame. The most practical, and logical, way to secure a plate or plaque is with mechanical fasteners or clamps which allow easy removal of the frame (Fig. 16). But if you're making fakes, you aren't particularly interested in logic or practicality. Your main concern is high-speed production, so you use industrial glue guns. 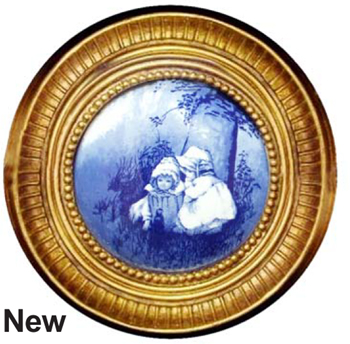 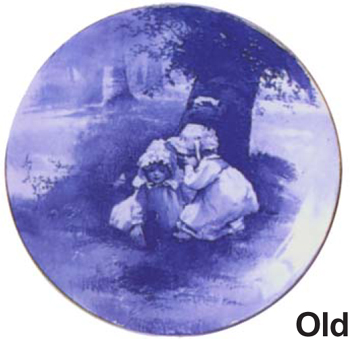 Fig. 2 A vintage 8-inch plate in Royal Doulton's Blue Children line, commonly called Babes in the Woods by collectors. The original title of this scene is "Two girls talking to a tiny witch." 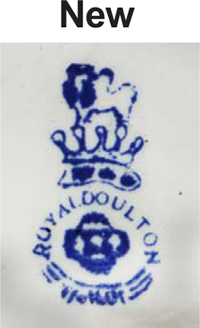 Fig. 3 Faked mark on new Babes in Wood plate shown in Fig. 1. The lion's body is badly distorted, the crown is poorly shaped. Meaningless symbols at the bottom rather than "England." This new mark is cobalt blue, the only color of mark found so far on the new plates. 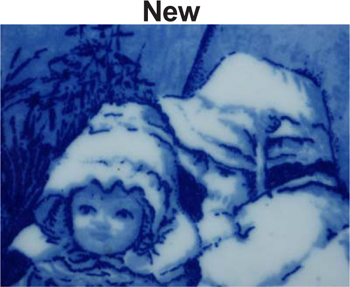 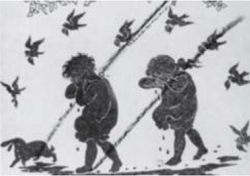 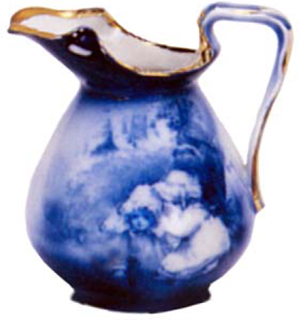 Fig. 6 Royal Bayreuth's cobalt Babes in the Woods pattern, shown here on a milk pitcher. The Bayreuth pattern is a virtual copy of Doulton's Blue Children "Two girls talking to a tiny witch." 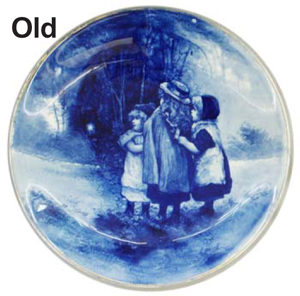 Fig. 7 An original Royal Doulton 8-inch plate in the Blue Children pattern, now commonly referred to as Babes in the Woods. The original title of this scene was "Three Girls Watching Tinkerbell." 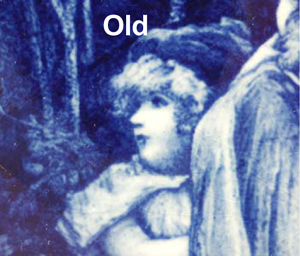 Fig. 8 Close-up of a child's face on the old plate in Fig. 7. Lifelike eyes, good detail in hair. Very detailed clothing with wrinkles, folds and several types of textures. The children are framed by a dense, complex background of a variety trees and branches in a variety of shapes and textures. 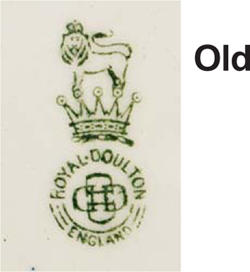 Fig. 9 An authentic mark on an the original Babes in Wood plate in Fig. 2 and Fig. 6. Lion wearing crown standing on a crown. "England, " the country of origin, is very distinct. This mark is green, which is the usual color for authentic Babes in Wood pieces, but colors of old marks vary. 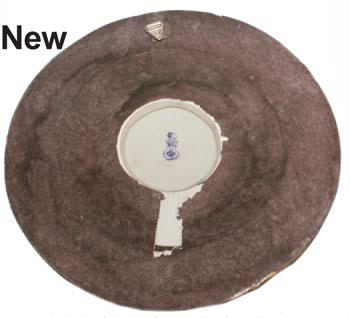 Fig. 10 The back of the new framed plate from Fig. 1 has been covered in paper. The rim of this new example is about one-quarter the diameter of the entire plate. 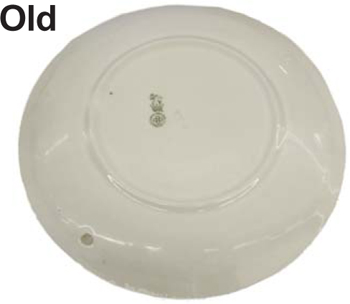 Fig. 11 Back of typical old 8-inch plate. A standard rim style, about one-half the diameter of the entire plate.

Fig. 12 Cross-section of typical rim on most plates.

Fig. 13 Cross-section of unusual rim on the new plate. 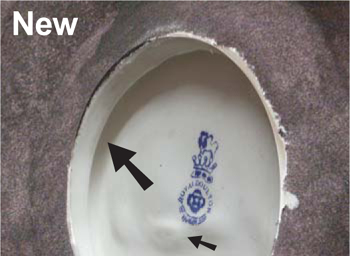 Fig. 14 Close-up view of the deep concave rim on the new plate (large arrow). Also note the rippling, wavy surface particularly directly under the bottom of the mark (small arrow) 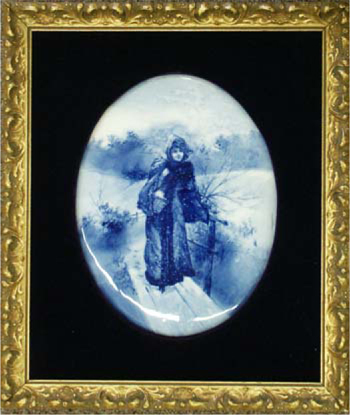 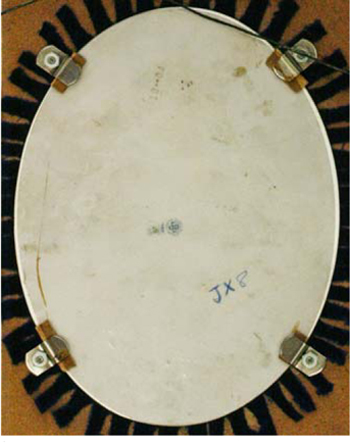 Fig. 16 The back of true wall plaques are flat; they do not have the rims found in plates. Backs of most plaques are also left unglazed; backs of all plates are glazed. Also note the mechanical clamps which allow easy removal of the plaque.

Fig. 17 The cross-section of true plaques is domed on the front, perfectly flat on the back. True plaques, unlike plates, do not have rims on the back. 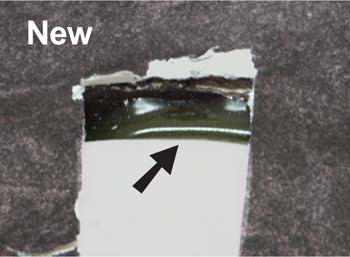