Everybody has a Frederic Remington for Sale

Bronzes by Frederic Remington are among the most widely reproduced of all metal sculptures. Some unauthorized copies of his work have been traced to at least 1920. But since the copyright protection expired in the 1960s, the number of reproductions in the market has exploded.

So how do you authenticate a Remington bronze? The best way to start is with a healthy dose of realism. The whereabouts of virtually all original Remington bronzes is well documented such as in Icons of the West (see NOTES), a book about Remington's works by Michael Greenbaum. Practically all original Remingtons sold today are offered through major auction galleries or well known art dealers. The least expensive original will probably sell for $75,000. Chances of you finding an original at the local flea market or having one walk into your shop are extremely remote.

Most Remington reproductions can be detected by following the guidelines offered in other articles about metal sculptures in general. The Frederic Remington Museum of Ogdensburg, New York (see NOTES) offers these two important tips to help you eliminate other Remington look-alikes.

Foundry marks–Authentic Remington bronzes are permanently marked with the foundry name (see Figs. 5, 6, 11). The majority of reproductions do not have foundry marks. All of Remington's originals were produced by only two firms: Roman Bronze Works and Henry-Bonnard Bronze Co. Any other name is automatically a forgery. Henry-Bonnard produced only sand castings for Remington; Roman Bronze Works, only lost wax castings. Any lost wax cast piece with a Henry-Bonnard foundry mark is automatically a forgery.

Casting Number Originals are permanently marked with a number indicating where in the production sequence they were produced (see Figs. 9 & 10) Many reproductions are marked in limited edition fashion with a purported casting number followed by the total edition number such as "12/250" or "55 of 500". Originals were never marked with the edition or production number in this manner.

Many originals were made in such limited numbers that finding any additional examples would be highly suspect. Only one original each of The Buffalo Signal and The Buffalo Horse, for example, were made. Less than 15 Coming through the Rye were originally made.

NOTES For more information on Remington's works, including markings and provenance of known works, and comparisons of new and old, ACRN recommends Icons of the West published by the Remington Museum. Price $49.95. For ordering information call 315-393-4464 or visit their web site www.fredericremington.org

Out of print but valuable for comparing of old and new is Cast and Recast, The Sculpture of Frederic Remington, Michael Shappiro, © 1981, The Smithsonian Institution Press.

Fig. 1 Only two sizes of Remington's original Bronco Buster were produced: one about 23″, the other, about 32″. Reproductions appear in a wide range of sizes from under eight inches to more than 8 feet (see Fig. 3 below). 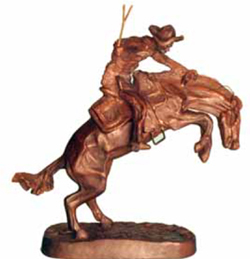 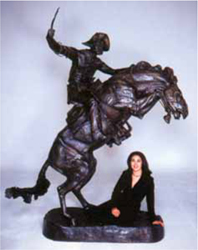 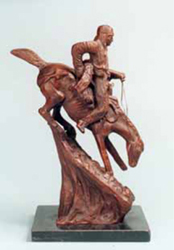 Fig. 4 Reproduction Mountain Man, by Frederic Remington. Cast pot metal with bronze colored finish, black marble base, 14″ tall. The original was only made in a 28-inch size.

Figs. 5 and 6 The two most common marks of Henry-Bonnard Bronze Co. as they appear on genuine Remington bronzes. A date frequently follows NY.

Fig. 8 In addition to the main signature which usually appears on the top of the base, most authentic Remington bronzes also bear a copyright notice with a second signature. The exact wording, date, styles and location of the copyright notice varies.

Fig. 9 Cast number on the bottom of the base on authentic Remington bronze.

Fig. 10 Cast number may also appear in the signature in the F of Frederic. 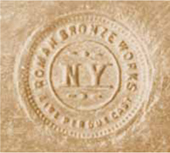 Fig. 11 Authentic foundry seal of Roman Bronze Works as it appears on a genuine Remington bronze. May also appear as a line of text.