Emphraim Faience Art Pottery, founded in 1996, specializes in making new pottery in the styles and colors of the Arts and Crafts period.

The majority of the company's first pieces were based on copies of well known period makers such as Grueby, Newcomb Saturday Evening Girls (SEG) and others. Later designs, though, have focused on contemporary interpretations of the general Arts and Crafts style.

Occasionally, some Ephraim pottery drifts into the antiques and collectibles market and can cause some confusion. Separating new Ephraim pottery from pieces by vintage makers, however, is relatively easy because all Ephraim is marked.

Kristin Cramer, Ephraim business and marketing manager, shared the history of Ephraim's marks. The marks and the dates appear below.

"It has always been Ephraim policy to permanently mark all pieces with all marks permanently incised into the clay," said Cramer. "The only exceptions are a few pieces accidentally not marked and caught as they were leaving the studio. Those pieces are marked with an ink stamp. But that amounts to only a handful of pieces since the pottery began."

All Ephraim designs except tiles are limited to 500 maximum piece production run. Around 20 to 30 new designs are introduced per year. Designs remain in catalogs for about two years.

Ephraim is aware that some of its pieces may be, either accidentally or deliberately, incorrectly represented by secondary sellers. "If people see an example of pottery they question, we encourage them to contact our office," said Cramer. "Many customers have seen pieces on internet auction sites like eBay and have called us for verification. We're always glad to help."

1998 "USA" was added below the existing trademark.

2000Mark developed for use on tiles.

2001Standard mark used on larger vases and tiles. Tick marks at the twelve and one o'clock positions.

2001Mark used for vases with a small foot. Tick marks at the twelve and one o'clock positions. 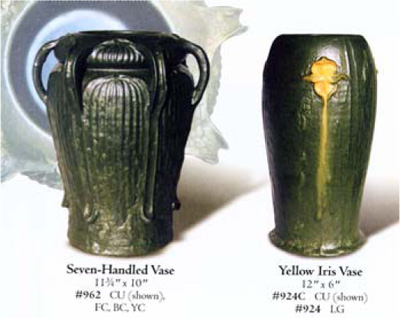 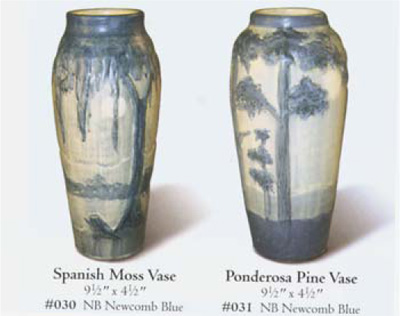 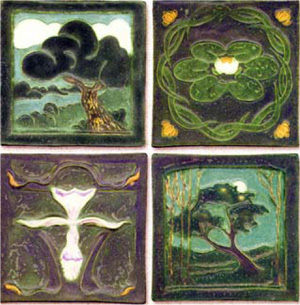 Figs. 4-7 Four new pottery tiles that appeared in an article on new Arts and Crafts tile in the June 2002 issue of ACRN. These pieces were mistakenly attributed to Ephraim Pottery. These pieces are new, but not made by Ephraim. The true maker has not as yet been identified. 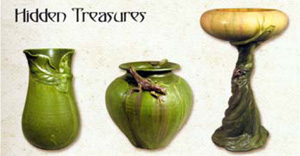 Fig. 8 Most current Ephraim designs are based on a contemporary interpretation of Arts and Crafts elements rather than exact copies of vintage makers. Left to right: 9" tree frog vase, 7" gecko vase, 13" tree trunk pedestal chalice.

Fig. 9 Photograph of impressed Ephraim Faience Pottery mark. This mark is from the year 1999.