The costume jewelry market has seen an increasing number of pieces made from new molds taken from vintage originals. Dozens of familiar designs are being sold by operations in California, Florida and North Carolina, using production and assembly labor from different points overseas. Eisenberg, Trifari, Boucher, Hobe, Weiss, Coro and Coro Craft are only some of the popular old names being reproduced in a broad range of styles.

One warning sign of a new piece is size. Many of what at first appears to be some of the better copies, are much larger than originals. This is because the new pieces are made in new larger molds. A good way to check for proper size is to refer to a reference book.

Along with size, a "heavy handed" treatment may also be a clue to a new copy. This includes a thick vermeil (silver or bronze) gilt, monotone coloring with no soft shading and poor quality settings such as stones with irregular facets or made of plastic.

Beginners and pros looking for telltale signs of reproductions should look first to the back sides. Many long-time manufacturers whose costume lines began in the 1920s have a used a variety of marks on their work. Many of these companies changed the appearance of their marks every decade, or used a different mark to correspond with a different line of jewelry. Buyers should know what marks are appropriate for what years and lines.

The Trifari mark, for example, is widely forged. An authentic Trifari mark rarely appears alone on a piece. Look for it with either the C in circle copyright symbol ©, the patent-pending wording, or the crown atop the capital T. The word by itself should raise a red flag. A sterling design marked Trifari, bearing a matte or frosted gold reverse finish, is another give-away.

Eisenbergs are among the most highly copied of the scarce collectibles, and the unofficial copies are becoming harder to spot. Most are over-sized and slightly garish, with too-bright plating and often plastic instead of glass stones. Fakes are also distinguished by the raised oval signature plate on the reverse; even the few sterling designs have the "sterling" word on a raised plate. The old Eisenbergs had the full name or the script "E" embedded directly into the mold. Another still-reliable mark of the true Eisenberg is the company's small manufacturing code, a single initial or number embedded in the mold, set apart from the signature.

In addition to forged marks, there are also copies of designs never marked originally now turning up with desirable company names added. What was once pretty but anonymous is now an "undiscovered" design by some famous maker. Coro and Coro Craft marks, for example, are showing up on designs never credited to that company. The Boucher name is also appearing on designs originally made by Trifari and Coro. Some lines of Trifari and Coro Craft pieces, noted for cabochon stones or carved "fruit salad" glass flowers and leaves, are victims of look a likes with only a few telling differences, one being the use of molded plastic instead of glass.

Another problem area is new "jelly belly" or "clear belly" figural pins. These pieces get their name from a clear piece of Lucite which usually represents the figure's belly or central design element. Some of the scarce Trifari and Coro Craft originals command four-figure prices. Copies of vintage designs are showing up with a variety of company marks. Be on guard if considering any jelly belly signed Boucher or Hobe' , because these companies didn't manufacture a line of Lucite pieces.

New jelly belly's can also be over-sized with bright plating and a generally cruder or more whimsical look than originals, even the ones done in sterling. There are also "hybrid" jelly belly's made from brooches which simply had a big center stone removed and were refitted with a piece of Lucite. Original ca. 1940s jelly belly's carry extremely fine detailing on both front and back sides, often with the Lucite fastened to the metal work by a set-screw (Fig. 10).

Keep in mind that it takes more than one questionable feature to bring a verdict of fake. There are just enough legitimate exceptions around to leave room for doubts. Jewelry produced in different eras by a single manufacturer, for example, may appear quite different. One line of good Trifari figurals from the 60s is distinguished by a "frosty" gold or silver finish both front and back, and carries a small rectangular nameplate. Not the same quality as 1940s pieces, but still real Trifari and very collectible.

The newer Eisenbergs (Eisenberg Ice) don't carry a number or initial code like earlier pieces, but they are genuine modern Eisenberg. And some of the earliest Eisenbergs did use a small nameplate logo, cut to fit the design when stamping wasn't practical.

Another consideration to be aware of is that many commercially successful designs were copied by competitors at the time of their introduction in the 30s, 40s and 50s. In other words, you could encounter an old copy as well as a deliberately faked copy made in years past. Cheap knockoffs made 60-30 years ago or yesterday generally are just not the same high quality as the originals they try to imitate.

There's room in the costume jewelry market for old and new, but the new shouldn't get too comfortable alongside the rare and grand vintage pieces. It's not a question of what's better, more a decision about truth in selling. 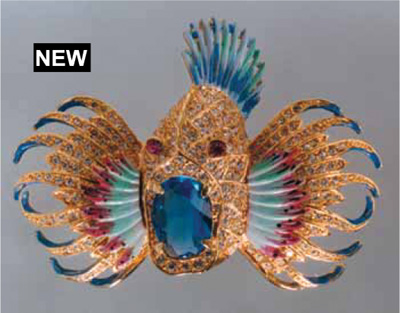 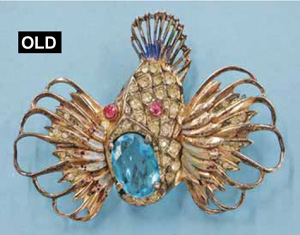 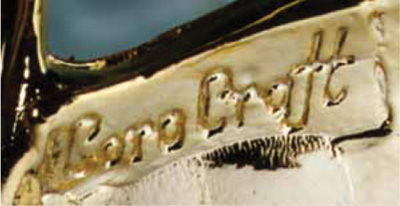 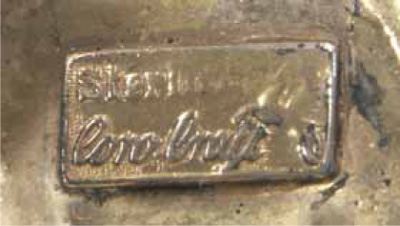 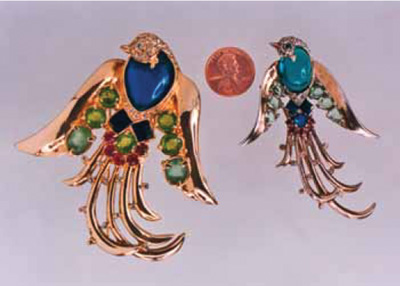 Fig. 5 (Old) Size is often a clue to a recent copy. The fake lyre bird on the left is in base metal with plastic center stone. The smaller original on the right is sterling with glass center stone. Both original and copy are marked Trifari. 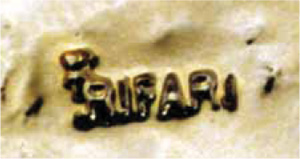 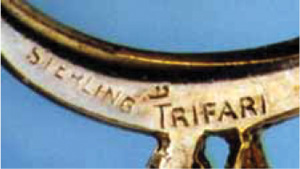 Fig. 7 (Old) Trifari and sterling marks on original lyre bird in Fig. 7. Original also has patent number (not shown) which is not on copy. 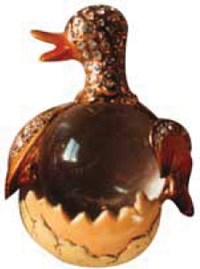 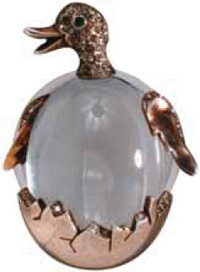 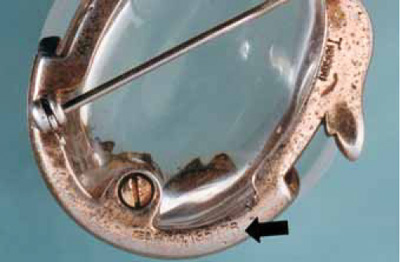 Fig. 10 (Old) Back of original Trifari duck in Fig. 9. Note Trifari patent number (at arrow) and the set-screw used to fasten Lucite. 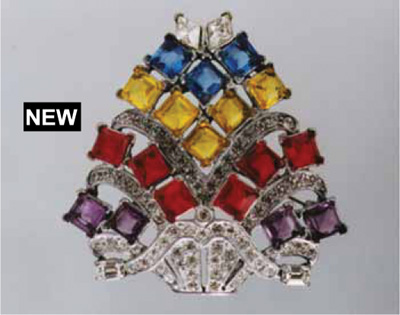 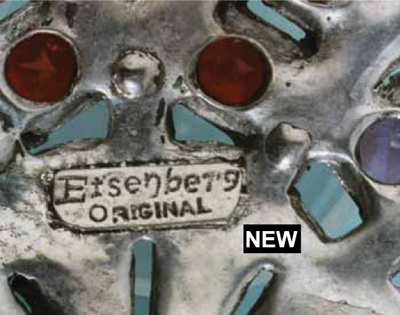 Fig. 12 The applied nameplate is often the sign of a copy. Original Eisenbergs are usually marked in the mold. 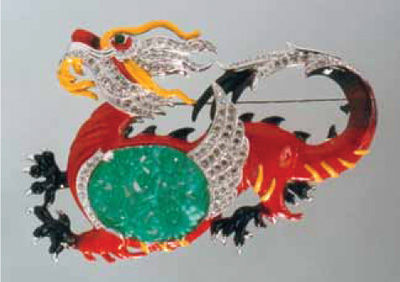 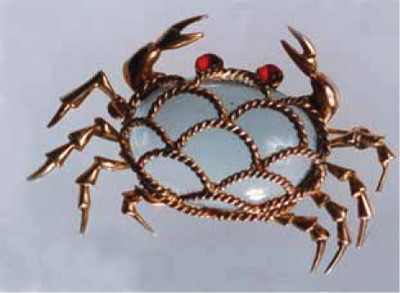 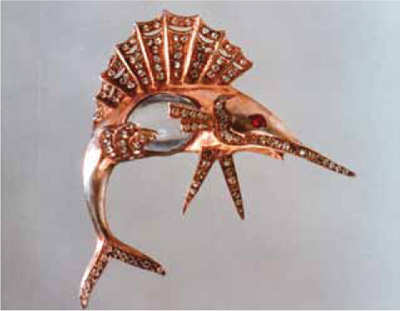 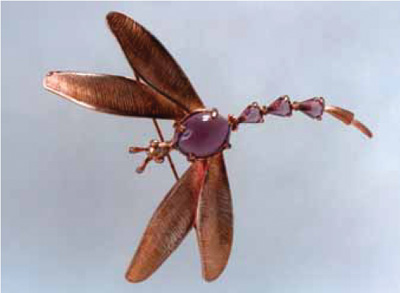 Fig. 16 (New) New 3 ½" X 4" sterling dragonfly marked Hobe'. Some of the new pieces marked sterling have been tested and showed no trace of silver. 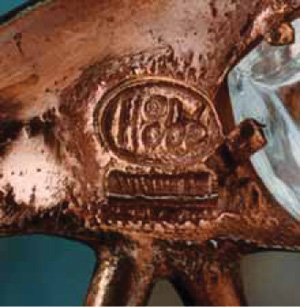 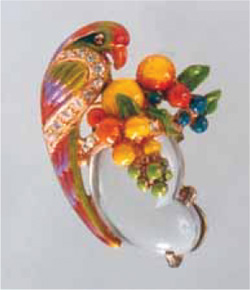 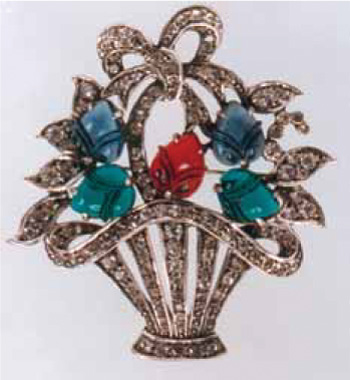 to shop with them for the Real Deal on Ruby Lane ...
Trifari Clear Lucite Jelly Belly Swordfish Brooch
It Still Glitters
$230 Sale Price 50% Off