Reproductions of highly sought original Deco Czech perfume stoppers have been filtering into the market since 1997. In late 1998, a second generation of improved quality stoppers and additional designs began to appear.

Particularly important is how design flaws and mistakes in the first generation of reproductions have been improved on. The first reproduction of Chrysanthemum, for example, was easily detected because the new stopper was perfectly rounded, with no notches cut into its rim (Fig. 3). It was easy to separate from the original which has a series of deeply cut notches in its rim (Fig. 4). However, the second generation reproduction Chrysanthemum stoppers are now notched as well (Fig. 5). Both versions of new stoppers are currently in the market, round and notched. The notches in the stopper alone cannot be used any longer as a guide to age or authenticity.

As far as known at this time, the Chrysanthemum stopper is the only new stopper that has been reworked to correct design problems. But other first generation stoppers may also have been "improved".

Four of the new stoppers on the market are "Girl on Butterfly" (Fig. 1), "Flamingo" (Fig. 2), "Woman with Fish" (Fig. 8) and "Nudes and Pearls" (Fig. 9). All the stoppers are reproductions of Deco period originals made in Czechoslovakia, ca. 1920-1939. In August, 1998, a new Flamingo bottle was sold for $300 through an Internet auction. An authentic Flamingo sold for about $450. Wholesale prices for the new perfumes vary from importer to importer from a low of about $75 each up to around $250 each.

Ken Leach of Gallery #57 in New York, a nationally recognized perfume specialist and dealer, talked about the new stoppers in a telephone interview.

"The new stoppers are being made in the Czech Republic (formerly Czechoslovakia) with original molds used in the 1920s and 30s. About 40 new stoppers were available in 1997. The importer has announced plans to introduce about another 40 designs for 1998. My best advice to buyers is to be very careful," said Leach. "Make sure you get a written receipt with your perfume which includes the year of production. Also insist the receipt include a money back guarantee if the piece can't be authenticated or is proved new. And be suspicious of bargains."

Although reproduction stoppers are being made more and more like originals, there are still some key points to consider when determining age and authenticity. First, almost all original Deco cut stoppers had a dropper, or dauber. Of course some original droppers have been broken during the years, but as a rule of thumb, if the stopper does not have a dropper, be particularly cautious.

Also inspect the part of the stopper–called the dowel or plug– that fits into the bottle. Most all old perfume stoppers and bottles were individually matched to a specific bottle. The stopper was made to fit by alternately grinding the stopper and inside of the bottle. Original dowels have the appearance of being evenly ground and appear evenly frosted. If frosting is patchy, missing in spots or irregular, it may be the sign of a reproduction. Original dowels also almost always show a smooth continuous taper. Many, but not all, new stoppers do not taper and have straight sides like a cylinder or rod.

If design mistakes have been corrected, other changes including better stoppers may not be too far off. The value of authentic Czech figural perfumes is in the stopper, not on the bottle, so focus your attention on the stopper. 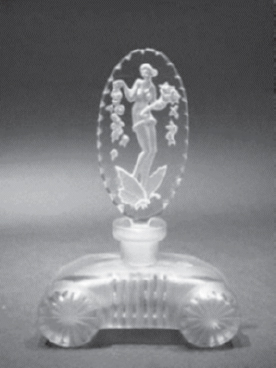 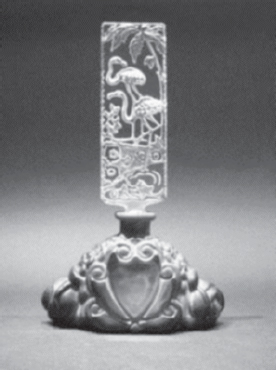 Fig. 2 Reproduction Flamingo cut stopper; bottle and stopper as shown, 8". All the new stoppers shown here may appear on a variety of bottles.

Note that the part of the old stopper that fits into the bottle (called a "dowel") is ground and frosted. This was to insure a good match with the bottle and prevent the perfume from evaporating. The same part on the new stopper is not ground. Grinding by itself is not an absolute test of age because new stoppers can also be ground. However, all original stoppers and bottles were ground to form a virtually airtight seal. Be very suspicious of loose, poorly fitted stoppers or stopper dowels that show no grinding. See Fig. 10 for stopper terms. 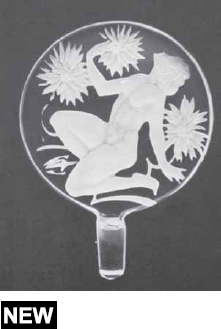 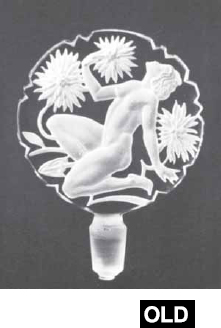 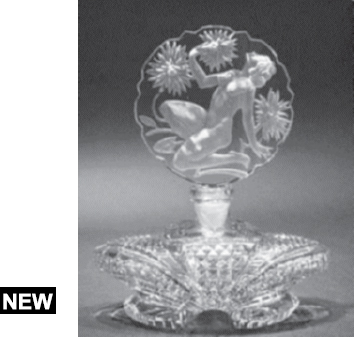 Fig. 6 New frosted mark appearing on some of the new bottles. This two line mark is very similar to original mark except the new is larger. Mark made by acid etching or sandblasting.

Fig. 7 New frosted Lalique mark which appears on some of the new bottles. Acid etched or sandblasted and made through a stencil. Similar to an original Lalique mark. 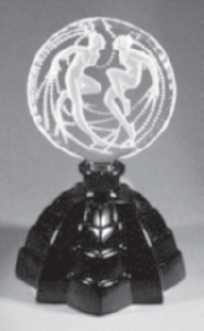 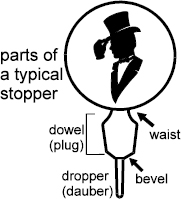