Joseph Locke was one of America's most creative glass designers. He patented many of today's most highly prized Victorian art glass including Amberina, Wild Rose (peachblow), Pomona, and Agata and a unique blown molded ware named Maize--whose surface resembles an ear of corn.

Original Maize was a single layer of opaque to semi-translucent glass in white, ivory (cream), crystal and pale yellow. The husks were decorated (stained) in contrasting colors, generally green but also blue or yellow; stains of all colors are subject to wear. Some, but not all, pieces have details outlined in gold.

Locke filed for and received a 3 ½ year design patent for his Maize Art Glass in 1889. He then assigned the patent to his employer, W. L. Libbey Glass Company of Toledo, Ohio1, which made original Maize in 23 shapes.

One of the characteristics of original Maize is the tapered profile which resembles the natural shape of a real ear of corn. Only the lamp bases and shades have shapes which do not taper. The other prominent feature is that the husk always appears on the bottom half of the piece. The exceptions to this rule are the three pieces in the condiment set--the mustard pot, salt and pepper--which are huskless and the large lamp shade with the husk around the chimney hole in the top. Standard sized salt and peppers have the husk as do all lamp fonts and lamp bases.

A modern look-alike Maize pattern was created by the L.G. Wright Glass Company in the mid-1960s and sold through at least the 1970s and probably early 1980s. Although the pattern itself is nearly identical--with ears of corn with husks on the bottom half--the shapes, type of glass and colors are unlike any of the Victorian originals.

The most obvious difference between Wright's new Maize and Libbey's is in the type of glass. Original Maize is a one color glass with walls seldom more than 1/8″ thick (see top rim, Fig. 1). except for lamps. Wright's new Maize glass is made of two colored cased glass which can reach nearly 1/4″ in thickness. Interior casings on Wright's pieces are pure white to chalky white; exterior colors are pastel pink, yellow, blue and white. None of the husks on Wright's Maize are stained; they are the same color as the exterior body.

Another possible case of mistaken identity are the various carnival glass corn patterns like the Northwood and Imperial pieces in Figs. 3 & 4. None of these carnival patterns were made as serving pieces. No original Libbey Maize was ever iridized.

1 Joseph Locke was a long time employee of the New England Glass Company (NEGC) of East Cambridge, Massachusetts which was operated by Edward Drummand Libbey. In 1888, Libbey moved his operation to Toledo, Ohio and changed the company name to Libbey. 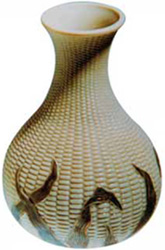 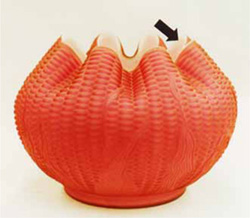 These photos reproduced from 1970 L. G. Wright catalog. None of these new shapes corresponds to any original Maize piece made by Libbey. Some shapes were used for multiple pieces. The large vase in Fig. 7, for example, is also the basic form used for the water pitcher, Fig. 9, and the lamp shade in Fig. 11 below. 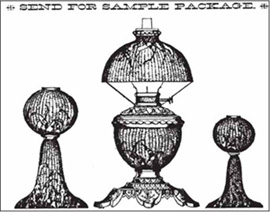 Fig. 12 (Old) Original Maize lamps by Libbey as shown in an 1889 trade advertisement. Lamps are the only original Maize shapes which are not tapered. 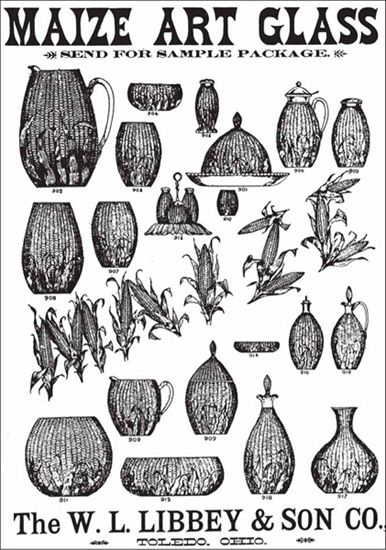 Fig 13. (Old) Libbey trade advertisement promoting their Maize glassware from 1889. All the serving pieces have a distinctively shaped tapered body. The only original Maize pieces which do not have a tapered shape are the lamps (shown Fig. 12). Notice that the letters spelling "MAIZE" across the middle of this advertisement are formed by ears of corn.