Mention "cinnabar" and different persons very often think of very different meanings. Although many loosely associate the word with Asian arts and antiques, few can offer a precise definition.

In its original form, cinnabar is crystallized red mercuric sulphide (HgS), the main ore bearing mercury. Cinnabar has been used for thousands of years as a coloring agent because of its intense red-orange color. It is obtained naturally by grinding ore into a fine powder then mixing the powder into dyes, paints and other finishes such as lacquer. It can also be manufactured by treating a mixture of liquid mercury and sulfur with potassium hydroxide. Cinnabar is the primary pigment in colors commonly referred to as vermillion and Chinese red.

Over the years, Western collectors gradually began referring to any reddish-orange colored lacquer as "cinnabar." Today you hear or read of items described as "cinnabar snuff bottles" or "cinnabar vases." Technically, those pieces are carved cinnabar-colored lacquer snuff bottles and vases. Cinnabar is the color; lacquer is the material from which the objects are carved. Lacquer–plain or carved–comes in many colors other than cinnabar including black, green, purple and others.

The use of lacquer was developed in China about 3000-2500 BC. Over the centuries the techniques of working with lacquer spread to other Asian countries including Japan and Korea.

Organic lacquer is formed from a natural resin. The most common source is the sap of the so-called lacquer or lac tree (Toxicodendron vernicifluum), which grows in central and eastern Asia. Once removed from the tree, the sap hardens when exposed to air.

Some of the first uses of lacquer were to make clay vessels watertight and as a preservative for wood. Eventually coloring agents–like cinnabar–were added and lacquer begin to be used for decorative effects including carving.

Here are the basic steps in producing carved lacquer. First, a rough form of the final shape is prepared to receive the lacquer. Lacquer can be applied to wood, metal, porcelain, paper, fabric or a wire frame. The material forming the basic shape is smoothed, polished and often treated with special materials to help the lacquer stick.

Next, thin layers of lacquer are applied over the basic form. Each layer must harden before applying the next. Eventually the layers are thick enough to carve. Depth of carving averages about one-eighth to one-quarter of an inch. Some carved lacquer has layers of more than one color (Fig. 3).

Carved lacquer from classical periods in Japan and China, 500-1700 AD, can have as many as 200-300 separate layers. Workshop records from those early periods speak of large pieces that took years to prepare and up to several years to carve. New pieces of genuine carved cinnabar lacquer in this article (Figs. 2-3) have an estimated 50-100 layers.

Reddish-orange carved lacquer, or cinnabar, has been widely exported to the West for over three hundred years. Cinnabar continues to be made today in China. It is a popular souvenir for tourists visiting Asia as well as being imported by gift wholesalers worldwide. Inexpensive cinnabar lookalikes in plastic have also been widely offered in catalogs by the decorating trade and reproduction wholesalers.

The problem for collectors is that all these pieces–antique examples, currently produced genuine lacquer, and many imitations made over many years–are all in today's market. Buyers need to know the proper way to determine whether a piece they examine is genuine carved lacquer or a molded copy.

Genuine carved lacquer virtually always shows some sign of the multiple layers from which it was created. The best place to look is at gradually tapering cuts. If you look at these cuts with a 10X loupe you will generally see a grain-like pattern of concentric rings (Fig. 5). Rings or grain are not generally visible on right angle cuts and may not appear at all on very finely carved pieces made before ca. 1900. Regardless of age, though, virtually all carved pieces show at least some evidence of tool marks produced by carving.

The most obvious clues to molding or casting are tell-tale production marks associated with plastic and other synthetic materials. Typical signs would include mold seams, pits from broken air bubbles (Fig. 7) and swirls within the material. Bases of many molded pieces often have what appear to be saw marks (Fig. 11) never found on genuine lacquer. Molded pieces also tend to lack the detail found in carved pieces but this may not be obvious unless you have experience.

Before modern plastics, the most common way to reproduce carved lacquer was to first make molds of genuine pieces. These molds were then used to make plaster copies. The copies were then painted with thick reddish-orange paint and sold as carved cinnabar. Slightly better reproductions were made by coating the plaster with a single layer of lacquer as a top coating. Another pre-1940 imitation was a type of red putty that was pressed in molds. This material was heat sensitive and often softens and blurs details.

A test of last resort is to drag a cotton swab moistened with fingernail polish remover across a suspected piece. Genuine lacquer will discolor the swab (Fig. 6); plastic is not affected. Use this test with extreme CAUTION–polish remover is highly flammable. It can also dull the original finish on genuine lacquer. Test hidden areas only and immediately clean the tested area with mild soap and rinse thoroughly.

Never use heated pins to test for lacquer. Many plastics as well as some lacquers emit toxic gasses or ignite when heated. The best test is to use your loupe and look for tool marks which indicate hand carving.

To many buyers, the age of cinnabar carved lacquer is not as important as the quality of workmanship. This art form has remained essentially unchanged for centuries and some pieces carved today are very high quality. Then again, many pieces from the 19th and early 20th century made for the tourist trade are very poor quality. Quality is usually defined by the amount and quality of detailed carving, number of layers of lacquer and condition.

Generally, pieces permanently marked China, or Made in China, date from ca. 1890s-1930s. Cinnabar being carved today usually has no permanent mark. Museum quality pieces are just that–in a museum and not at your local flea market or on eBay. And don't get excited over Chinese characters on a piece. Most of those marks were applied to impress Western tourists and are on more reproductions than genuine pieces. 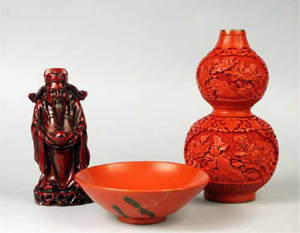 Fig. 1 Learn to separate genuine lacquer from copies and reproductions. 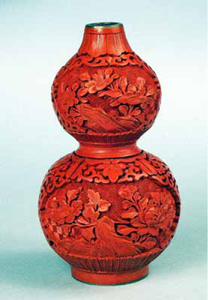 Fig. 2 Carved cinnabar colored lacquer double-gourd 6½″ vase, lacquer over brass. Interior of vase and outside surface of base in blue enamel. Made new in China, $45, no permanent mark. See base in Fig. 12 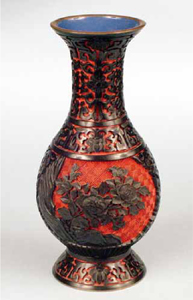 Fig. 3 Carved lacquer over brass 8″ vase. Black top layer over cinnabar red bottom layer. Made new in China, $64. Interior and base in blue enamel. See base in Fig. 12 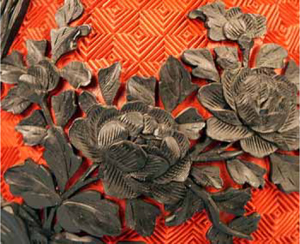 Fig. 4 Detail of carving on two-layered vase shown in Fig. 3 Black top layer over red background. Top layer is about one-eighth of an inch deep. 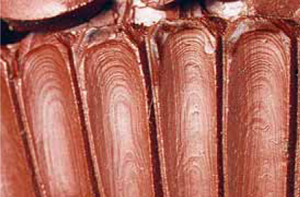 Fig. 5 A 10X view of layers as exposed in a cut in genuine cinnabar carved lacquer. Deep tapering cuts made parallel to the surface usually reveal this grain-like pattern of concentric rings.

Fig. 6 Genuine lacquer will discolor a cotton swab moistened with fingernail polish remover. This test should be used as a last resort; original surfaces may be dulled. 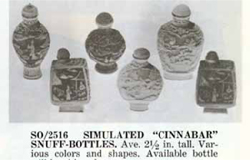 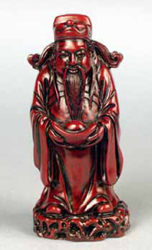 Fig. 9 Not all cinnabar imitations are vases and snuff bottles. This 5″ statue in red plastic copies an original made of carved lacquer. A set of three different statues retails for $19.95.

Fig. 10 Note that this new figure rests on a molded base. The base and figure are cast as one piece. When bases and figures are cast as a single piece, it is almost a certain sign of a reproduction. 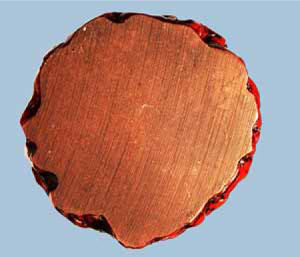 Fig. 11 Many plastic imitations of cinnabar have saw-like tool marks on the bases. Such marks are never found on genuine carved lacquer. Actual size is 2″ across. 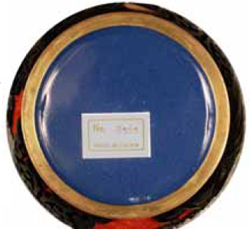 Fig. 12
Base of new but genuine carved cinnabar lacquer vases from Figs. 2-3. Brass body shows through in the rim. Base covered in blue enamel. The only mark is removable Made in China paper label.