"Kugel" is the name of heavy glass Christmas ornaments that were made in Germany from as early as 1840 to the early 1900s. Although the word kugel means "round ball" in German, original kugels were also made in the shape of grapes, apples, pears, pine cones, berries, tear drops and balls with melon-style ribs.

Original kugels are generally lined inside with silver. The outside colors are red, cobalt, blue, green, silver, gold and amethyst. There is a hole in the top of each ornament which is concealed by a brass cap. Caps may or may not have an embossed design. Caps are fastened to the ornament with a piece of wire with spread out legs. Circular hanging loops are usually fastened to the wire on the cap.

New kugels began appearing in the American market years ago in a national mail order catalog. The new pieces are made in old shapes such as round 2″ balls, grapes in 5″ and 3″ clusters, and a 2 1/8″ melon-ribbed ball. New kugels arrived from the wholesalers with a removable paper or cardboard label marked "Made in India."

The major difference between new and old is the glass around the hole in the top of the ornament. Old kugels (with the exception of very early pieces) were cut off the blowing iron virtually flush with the surrounding surface. New kugels are cut off the iron substantially above the surface of the ornament. The raised glass surrounding the hole is technically called a pike or spear but most collectors just say "neck" which is the term we'll use.

Tops of the new necks are very rough having a "cracked off" appearance. Generally, most old kugels have much smoother tops although this can vary with the skill in which the old ornament was made.

So far only three types of brass caps have been used on the new kugels. These are shown in Fig. 9. Any pieces with these particular embossed patterns should be considered suspect. The top wire and hanging loop on the new kugels arrives from the wholesaler already aged and rusted. The new brass caps also have an "antique" patina.

CAUTION: Do not confuse kugels, which were made ca. 1840-1900 and are thick heavy glass, with the thin-walled glass ornaments made after 1918. Use the guidelines above for kugels only. 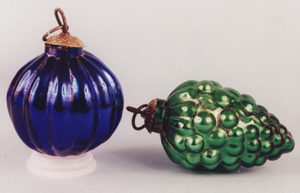 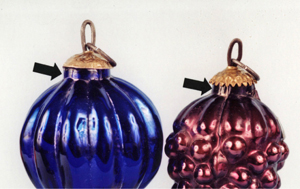 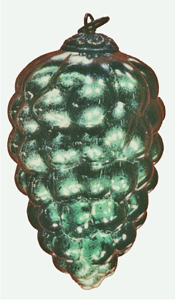 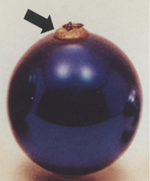 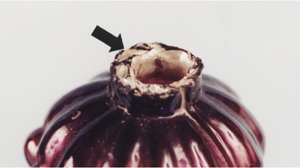 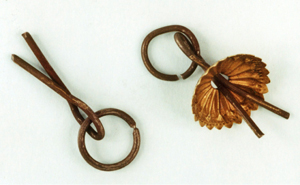 Fig. 8 (New) The top wire, hanging loop and brass cap in new kugels are artifically aged. The new brass caps have a patina and the new top wire and hanging loops are rusted. ACRN photo

Fig. 9 (New) Close up of new brass caps. So far, all the new kugels have only these caps so make a note of them. Also be alert for old caps on the new kugels. ACRN photo

Fig. 10 (New) Kugels come from the importer with a removable "Made in India" paper or cardboard label. This example shown slightly larger than actual size. ACRN photo