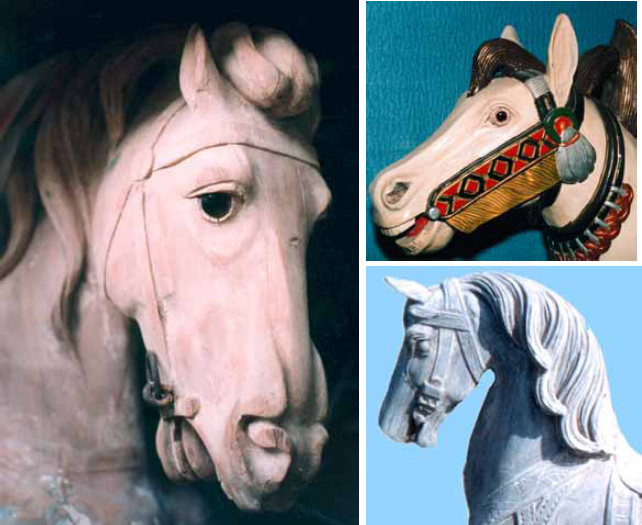 Carved wooden carousel horses are now considered examples of American art. Original horses like the one on left above can sell for several thousand dollars and up; rare figures have sold as high as $100,000. Carousel reproductions, like those on the right, are being seen in increasing numbers.

One article can not make you an expert on deciding which company or carver made a particular carousel figure. It will, however, show and explain the basic differences between original American-made wooden carousel horses and the vast majority of typical reproductions.

The 17th century Italian word "carosello" means "little war" and was an event in which riders on horseback had to catch clay balls filled with perfume. In France, similar contests were held in which riders tried to pick up small gold rings on the points of their lances. Riders practiced on simple wooden horses attached to a central pole and turned by humans or live horses in a pit below. The French word for pageants by knights was "carrousel" and that word began to be used to describe the revolving wooden horses. The idea of catching or spearing an object survived to modern times by offering carousel riders a brass ring.

Carousels remained small until they began to be powered by steam in the 1860s. In America, there were two basic types of carousels. One was small with two rows of figures that could easily be taken apart and hauled by carnivals and shows circuses which toured the small towns of the Midwest and Southern states. The other style was the large elaborate carousel permanently installed in big city amusement parks with some units having up to 80 figures arranged four abreast.

In addition to horses, a wide variety of other animals were carved including elephants, bears, lions, giraffes, roosters, dogs, pigs and goats. The highest quality carvings were done between 1905 and 1925. As the Depression approached wooden figures began to be carved by machine and cast aluminum heads and legs were attached to wooden bodies to save money. Wooden figures were entirely discontinued in the 1930s and replaced by easier to care for all aluminum and later all fiberglass figures.

Almost all new wooden carousel horses are made of Philippine mahogany or other soft tropical woods. This wood is easily chipped and shows radial cracks. Unfinished Philippine mahogany is dark red to light brown in color with very dark brown or black pits and streaks. Authentic carousel figures are generally carved from basswood, poplar, and pine which have virtually no grain pattern and are very pale. Less common are authentic figures of cypress and Honduran (South American) mahogany. All authentic Honduran mahogany horses have hollow bodies, not solid bodies (see construction details in the following illustrations.)

Marsha Schloesser has restored and painted carousel horses for over ten years. Her business, Carousel Workshop, is located in DeLand, Florida. 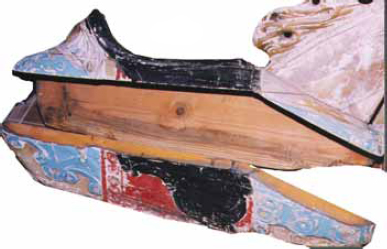 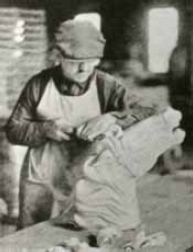 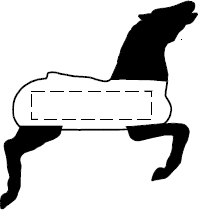 Carousel horses are generally described by their stance--stander, prancer, jumper--and their location on the original carousel platform--outside row or, inside row. See illustrations below. 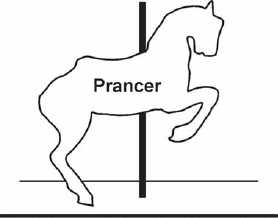 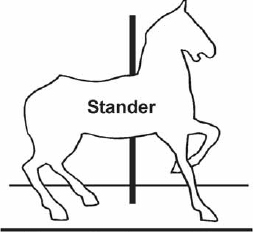 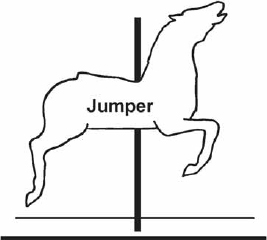 Fig. 8 All four legs off platform 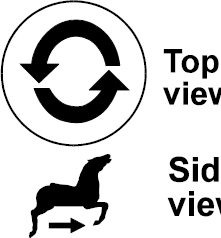 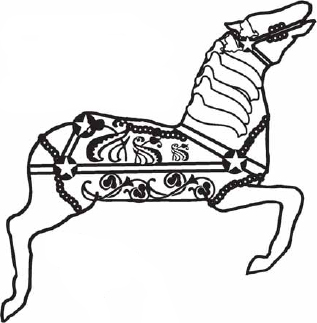 Fig. 10 The romance side of a figure, the side that faces the public, is more elaborately decorated than the side toward the carousel. 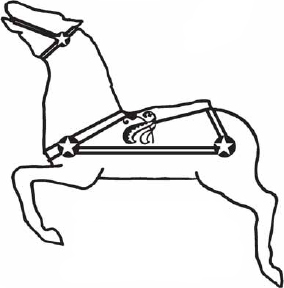 Fig. 11 The side of the figure facing the carousel, called the off side, is plainer than the side facing the public. 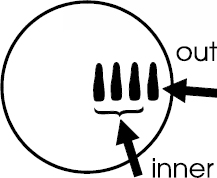 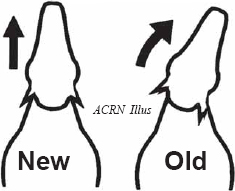 Fig. 13 Top view: Heads and necks of authentic carousel horses are almost always turned towards the public and away from the carousel. Most new horses are carved with the head and neck in a straight line pointing forward. 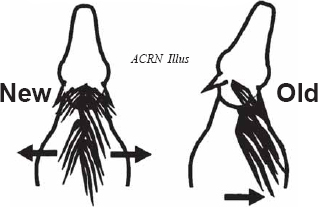 Fig. 14 Top view: Manes of authentic carousel horses are almost always carved away from the carousel side and towards the public. New manes generally fall on both sides of the neck without a specific direction. 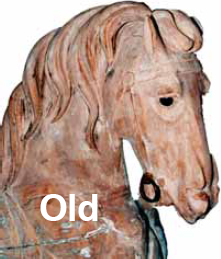 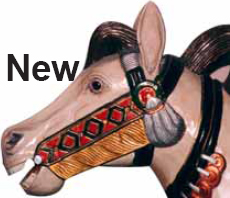 Fig. 16 New heads and necks are generally facing straight ahead. The mane is carved splitting evenly across the middle of neck, no specific direction 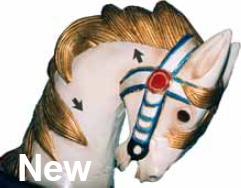 Manes of old horses are generally carved--usually in soft flowing lines--to specifically face the public. A few wisps of hair might end up on the offside but the mane as a whole virtually always falls on the side away from the carousel and towards the public. The manes of most new figures have no specific direction: some run down the center, others are divided equally between right and left sides. New manes are simply carved in straight grooves. 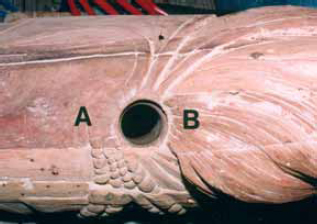 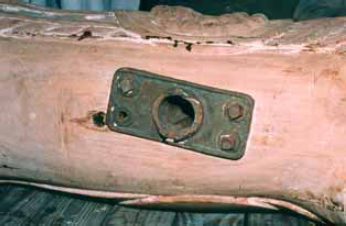 Virtually all old horses have a pole hole which goes entirely through the body, top to bottom. You should be able to look into the hole and see the cavity of the hollow-box like body and see daylight at the other end of the hole. The pole hole is always located at the balance point of the figure. This point was usually at the front of the saddle (A) and near base of the mane (B). New wooden figures seldom have a pole hole that goes through the entire body. If they do, you can look through the hole and see that the body is solid, not hollow. Some new figures with pole holes have the holes located at the wrong point such as through the middle of the saddle or far up into the neck.

The belly plate was a metal fixture surrounding the bottom of the pole hole which supported the pole and strengthened the wood. Beware of some new carvings which have a carved out rectangular indentation for the plate but the plate is "missing". 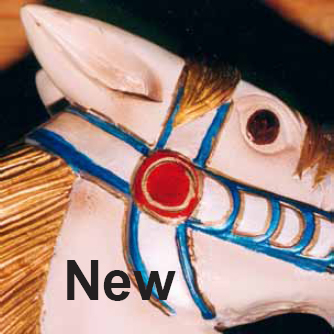 Fig. 20 Typical new sharply pointed free-standing ears. Such points would pose a danger to passengers and would be easily damaged on a functional carousel. Unrealistic button-like eye. 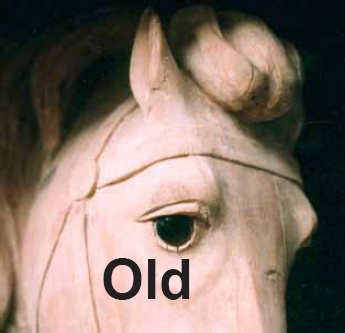 Fig. 21 Most original ears are supported by being placed against the mane. This prevents breakage. Note life-like glass eyes in realistic eye-socket

EARS: Like many reproductions, most new carousel figures are not logically made for practical daily use. This is particularly true of the ears. New horses generally have very large ears that project out away from the head with no surrounding support. Such ears would easily be damaged and broken off in the day to day life of a working park carousel. The damage would be worse during the put-up and take-down cycle of traveling carousels. In addition to ears, this logic also applies to other projecting decorations like the standing tassel shown in Fig. 22. Some ears on the reproductions are removable; authentic ears were not removable. Ears on authentic carousel horses are realistic and well proportioned to the head. Many original ears are surrounded by other masses of wood such as manes, harness, bridles or other features for added protection and support. Another technique was to carve the ears laid back into the mane for protection as shown in Fig. 23.

EYES: Authentic carousel figures can have either carved and painted eyes or realistic glass eyes. The authentic eyes are placed in naturalistic eye sockets which were carefully carved to receive the eyes. Eyes and their socket are proportioned to the head and generally contribute to a figure's "expression". New eyes are generally poorly carved and painted or they are plastic. More recent reproductions are using glass eyes but they are poorly fitted. 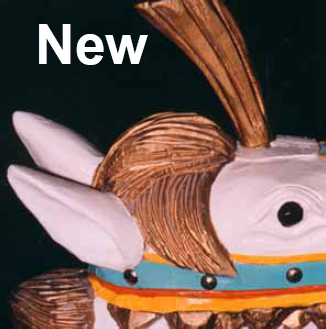 Fig. 22 Typical new "rabbit" ears projecting away from head; poorly carved eye socket. Note the straight grooves used to carve the hair in the mane on top of the head. 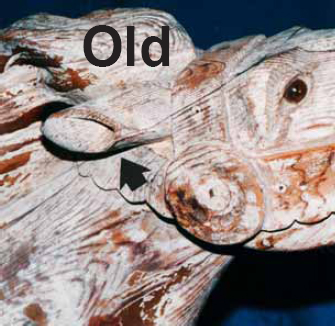 Authentic figures have lifelike muzzles with realistic lips, teeth, nostrils and tongue all correctly proportioned to the size of the head. The teeth vary in size as they do in a real horse. All carving is smoothly finished.

Muzzles of new figures usually show many rough chisel marks. Some figures are missing a tongue; many new teeth are too long or are all carved very exact and straight. New tongues can be thick; some extend beyond the teeth and have a pointed tip. Nostrils are poorly cut and are usually too small for the size of the head. 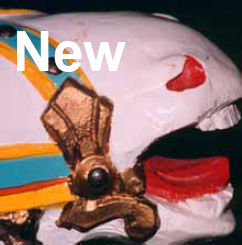 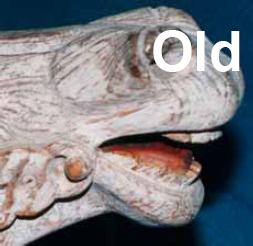 Tails on authentic carousel horses were horse hair or carved wood. Many styles of wood tails were used but all were smoothly carved in flowing strokes that varied in width and length. Original tails are not removable. Tails on reproductions are primarily carved with straight long "v" shaped grooves. Many of the new tails are removable for shipping. Some new tails are made of hemp fibers which occasionally retain folds and creases from being packed in shipping containers. 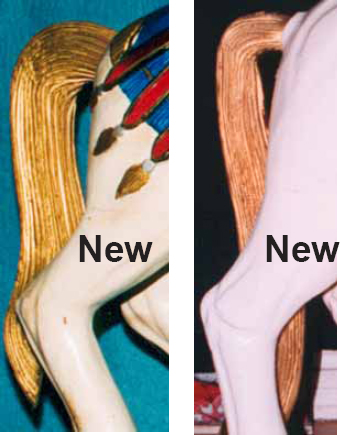 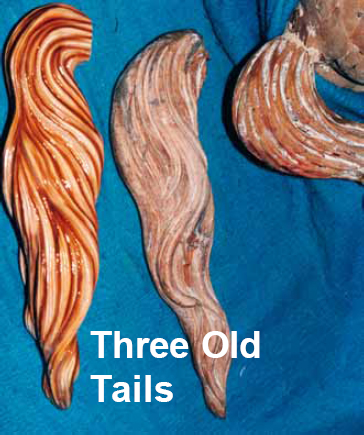 Fig. 29 Old jewels/bead work/mirrors are set in holes below surface

New hooves are poorly proportioned to the legs and size of the animal, not well rounded. Most reproductions do not have shoes; when they are carved they are rough and show tool marks; no metal shoes.

Old hooves are smooth, well rounded and in proportion to the size of the animal. Carved shoes all measure the same. Applied metal shoes should exactly fit the hooves.

New paint is usually very thick. Many pastels and whitewashed bodies. Some silkscreening is used. Occasionally, recently imported horses still have wet or damp paint. So far, no metal leafing has been used on new figures--when gold is used, it is only gold paint, not gold leaf.

Old figures were hand painted with milk paints and lead based enamels which produced bright true colors. True gold, silver and copper leafing was used on some originals particularly on large amusement park carousels like those at Coney Island.

New saddles are generally squared off and have sharp ridges along the edges. They are uncomfortable to sit on and would never have been practical on a working carousel.

Old saddles were carved to fit the contours of the human body; both adults and children should be able to sit comfortably

Some contemporary carousel carvers put their names and initials on their work.

Very few originals are signed or marked. Some companies used carved emblems or metal plates but most did not.

New horses have been reproduced in non-wood materials since the 1950s. Most are copied directly from originals and were intended as replacement figures for working carousels. The majority of the non-wood figures are made in aluminum, fiber glass and cast resin.

Original traveler size jumpers measure about 60" in length, average about 9" in width and virtually never weigh over 80 lbs. maximum. Full size standers and jumpers range from 50-85" in length.

Some "kiddie" sizes in cast iron were also used on early smaller mechanical rides. In the 1930s, some aluminum heads and legs were used on wood bodies--these were called "jug heads" or "half & half" and have not been reproduced so far. 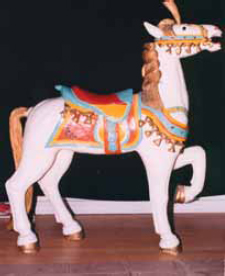 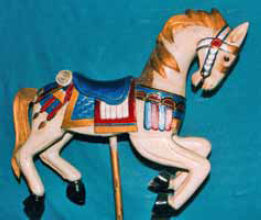 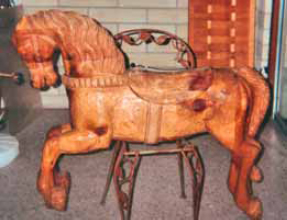 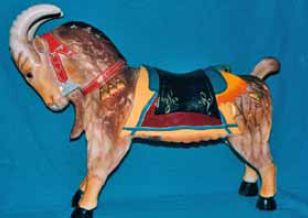 Many new figures are copied directly from well known pieces shown in leading reference books on carousel art. The new horses in Figs. 30 & 31 and the new ram in Fig. 33 are copied from original figures shown in The Carousel Animal. Fig. 32, is a new horse, unpainted.