If the choice were yours, which would you prefer: a $1000 original or cheap reproduction from the 1980s? Obviously, we'd all hope for the original.

But hoping doesn't make it so. Especially with cruets represented as 19th century Mt. Washington Burmese. This type of glass, a yellow body shading to salmon pink, was extensively reproduced in Italy from the 1970s through the 1980s. Probably the most common new shape was a cruet. These new cruets are now commonly mistaken, or deliberately, represented as old originals. This article describes how to separate the original Mt. Washington cruet from its many imitators.

Original Burmese is a heat sensitive glass. That is to say the color of the finished product can be changed by reheating. Glass is made heat sensitive by adding gold to the glass batch. The soft yellow color of Burmese was created by uranium. Originally, all Burmese was yellow. Reheating a piece created the pink highlights and accents.

Burmese was patented in 1885 by Frederick Shirley of the Mt. Washington Glass Co. which produced the glass until about 1895. Mt. Washington also licensed Thomas Webb in England to make Burmese which it did through around 1900.

The only shape produced in the regular production runs of Mt. Washington Burmese is a relatively low ribbed body with a ribbed mushroom-shaped stopper (Fig. 1). Originals have a solid, fairly sturdy, smooth surfaced applied handle (Fig. 9). Finishes may be either matte or the rarer glossy finish. Some originals are decorated with sprays of delicate clusters of handpainted flowers. All standard production run spouts are formed in a straight ahead shape (Fig. 11). No 19th century cruet in Webb Burmese has ever been documented. All original 19th century Burmese by both Mt. Washington and Webb will fluoresce under long wave black light.

Perhaps the most obvious difference between new and old cruets is the construction of the handles. New handles are almost always thin and poorly formed and crudely attached to the body (Fig. 6). Most new handles are also narrowly ridged, or reeded (Figs. 6, 8). The great majority of new spouts are trefoil, or three-lobed (Fig. 10). New stoppers vary considerably but none are made in the ribbed mushroom shape of the original. Many new cruets will also fluoresce under black light so black light cannot be used as your only test of age. 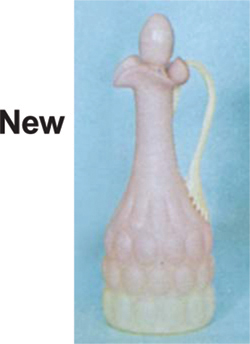 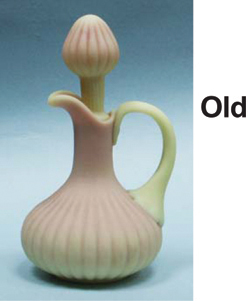 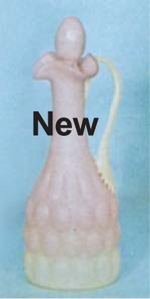 Fig. 3 The new hobnail cruet was apparently based on the original hobnail pattern shown in Fig. 4. No hobnail cruet like this was ever part of original Mt. Washington production. 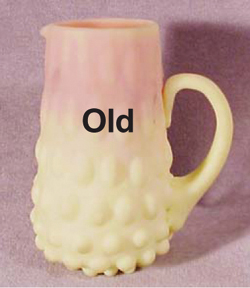 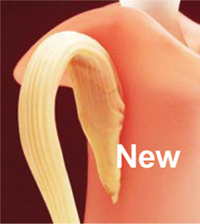 Figs. 5-6 Imitation Burmese cruet with painted decoration. The cruet was made in Murano, Italy ca. late 1970s through the mid-1980s. Detail of thin, poorly formed ridged handle is shown where it attaches to the body in Fig. 6. 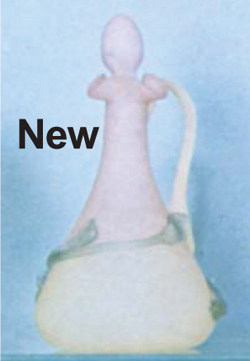 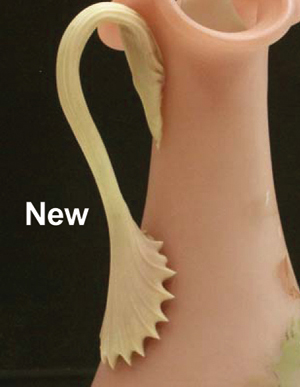 Fig. 8 Typical handle on imitation Burmese cruets. Very thin and narrowly ridged. The point where the top of the handle attaches to the body can be very ragged. 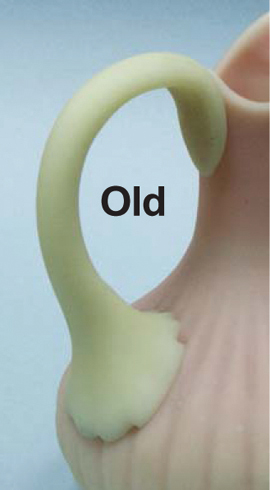 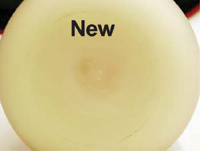