Original Burmese is a 19th century art glass patented by Frederick Shirley of the Mt. Washington Glass Company in 1885. The distinctive feature of this glass is its shading from a yellow body to salmon pink towards edges and rims. From about 1970 through the early 1980s, a considerable quantity of imitation Burmese was produced in Murano, Italy for export.

Most of the new Burmese was destined for the American market, brought in by reproduction wholesalers like A.A. Importing or gift importers like Koscherak Bros. Now, with 20 or so years of age, many of these late 20th century reproductions are being mistakenly or deliberately offered and priced as 19th century original Burmese.

Authentic Burmese and most other internally shaded 19th century art glass such as amberina, peach blow, etc., are made from heat sensitive glass formulas. That means the appearance of the glass can be changed by controlling, changing or selectively applying heat. Burmese, for example, after being blown and worked, would be entirely yellow. The pink shading was produced by partially exposing the piece to a higher temperature. The area reheated would remain shaded when the piece cooled.

The process of reheating a portion of a piece to get a color change is technically called striking; a piece of glass that has been reheated and has changed color has been struck. Example: Amberina is originally all amber. Reheated portions strike ruby red. The key ingredient to any heat sensitive glass is gold. It is what produces the pink shading in Burmese and the ruby red in amberina.

The soft yellow color of Burmese was produced by uranium oxide. Two pounds were added to a 184 pound formula for translucent white glass. Due to the uranium, all original Burmese fluoresces yellow green under long wave black light. The 184 pound batch was made heat sensitive by the addition of 1½ pennyweights of gold (a pennyweight equals 1/20th of an ounce).

In addition to Mt. Washington, authentic 19th century Burmese was also made under license in England by Thomas Webb and Sons. Webb marketed its version under the name Queen's Burmese Ware. Most pieces were marked with this name acid etched in the base or with a paper label. Mt. Washington pieces were never permanently marked. An oval paper label reading "Mt. W.G. Co. Burmese Dec. 15th 1885" was sometimes used but is rarely found intact. Burmese continued to be made by Mt. Washington until about 1895; Webb produced their version until around 1900.

Original Mt. Washington Burmese was made in both satin and glossy finishes; virtually all of Webb's Burmese was satin finish. Both firms made many pieces with very intricate hand painted decorations. Mt. Washington's decorated Burmese includes landscapes, fish, game birds, flowers and poetic verses. Most of Webb's Burmese were decorated with floral patterns. Mt. Washington's most frequently seen stock shapes are shown in the original ca. 1885 catalog pages in Figs. 17 & 18. (not all old shapes are shown). All authentic Burmese, English or American, was blown and shows a ground pontil.

There are two big myths that first need to be laid to rest before discussing reproductions in detail. The first myth is that the use of uranium has been banned by the government and is no longer available to glass manufacturers. Without uranium, some people say, no reproduction Burmese can be made. This is simply wrong.

Like many other rare or limited supply commodities, Uranium is regulated by the government, but not banned. Uranium oxide is commonly used today in reproduction vaseline glass novelties. All of the 1970s Italian reproductions include uranium and fluoresce under black light just like 19th century originals. Some crude Burmese reproductions by unknown makers do not fluoresce so black light is still a good test to use but not the only test.

The other myth is that the use of gold in the Burmese formula makes reproductions unprofitable. Again, this is simply not true. According to the original formula, only slightly more than 1/20th of an ounce of gold was required for a 184 pound batch of Burmese. If gold were $350 an ounce, it would only cost $26.25 for 1½ pennyweights. An insignificant amount considering the cost of the total batch plus overhead in equipment, workers, furnaces, etc.

The proof uranium and gold were no obstacles in making reproductions is the low prices reproductions originally brought. In the 1970s, the average price of AA Importing Co.'s ten standard Burmese reproductions was $16. The majority of pieces were under $12. Even adjusted for twenty years of inflation, those prices are modest.

Keep these simple rules in mind when evaluating a piece of Burmese:

It is also becoming more important to carefully inspect decorated Burmese pieces. Genuinely old but originally undecorated pieces are now being painted to bring higher prices. All original decorations are fired on; many recent paintings are not. Black light may be helpful in spotting recently applied decorations.

The 1970s group is virtually all shiny rather than satin finished. It can be distinguished by deeper pink rims that change abruptly to yellow rather than the gradual color shading of older pieces. Both Bryden and Gunderson types are heavier than old pieces. Bryden pieces from the 1970s follow early catalog shapes; Gundersen is in a variety of styles. Color change in Gundersen pieces also tends to be abrupt frequently producing a distinct line where pink and yellow meet. Pieces from both Bryden and Gundersen are well finished and have ground pontils. Both fluoresce in black light although 1970s pieces are weaker.

As you can see, "Burmese" on your written receipt is not enough. Protect yourself by asking the seller to write down the estimated year of production. 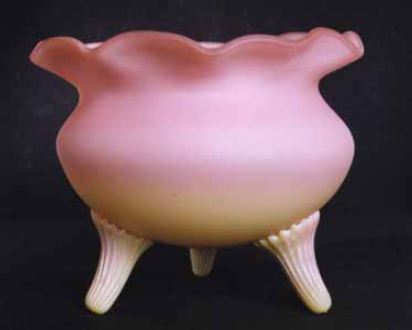 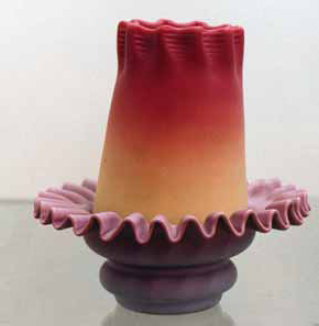 Two pieces of reproduction Burmese made in Italy ca. 1970-1980s. Fig. 1 is an 8-inch footed bowl. The fairy lamp in Fig. 1-A is a fantasy piece designed by reproduction importers; no shape like this ever existed in authentic Burmese. 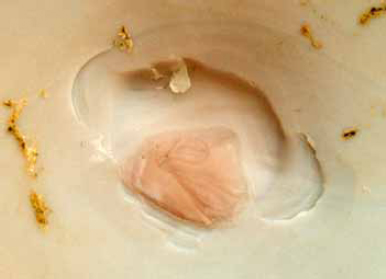 Rough pontil found on virtually all the Italian made Burmese reproductions in Fig. 2. shown about twice actual size. Very rarely some pontils on reproductions will show some crude grinding as in Fig. 3. Note the deep parallel lines left by a coarse 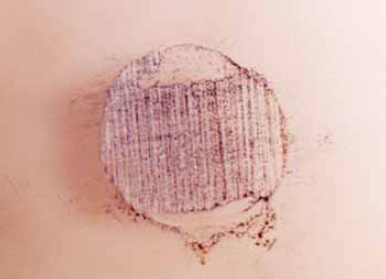 Grinding wheel. Pontils on originals are always ground smooth. The grinding marks in this example have been rubbed with a soft lead pencil to bring out the texture. Pontil in Fig. 3 shown about twice actual size.

Fig. 4 Many handles and feet on the Italian reproductions have very narrow ribbing like this example. Some original feet do have ribs but the spacing is much wider. 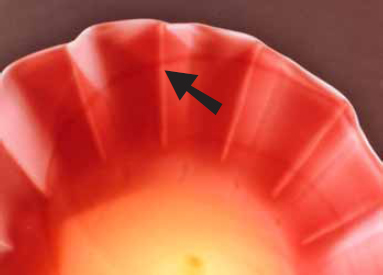 Fig. 5 Many Italian reproductions like the one above show swirls and streaks in the glass when held to the light. Internal flaws are extremely rare in original Burmese.

Original wholesale prices shown if known. Photos from actual examples documented in catalogs or from illustrations in catalogs and brochures. 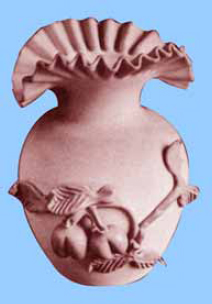 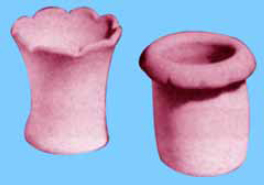 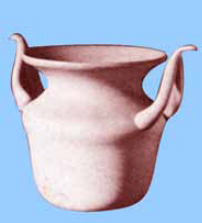 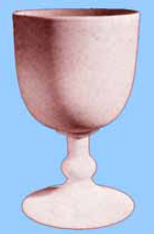 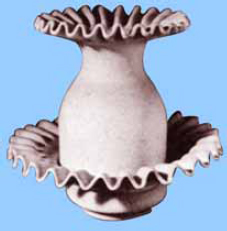 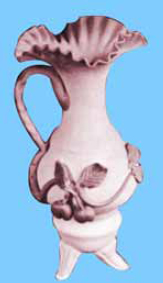 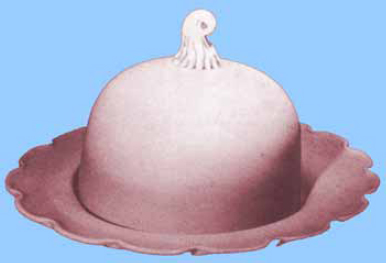 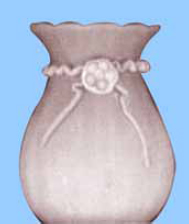 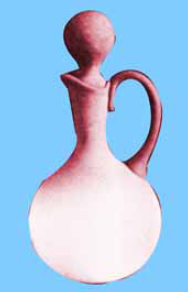 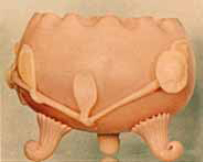 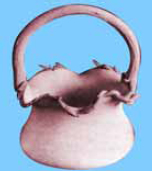 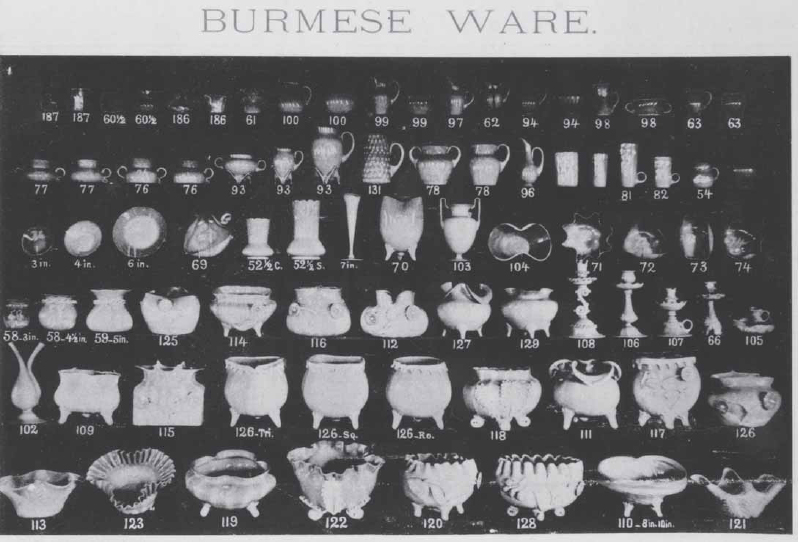 Figs. 17 (above), 18 (below) Original pages from Some reproductions attempt to copy specific original shapes. In Fig. 17 these include #131, pitcher (2nd row from top, middle); disc and rope decorations on shapes #58-59, (4th row from top, left); footed bowl #111, (5th row from top, right) and the footed bowl #120, (bottom row, right). Catalog pages courtesy Collection of the Juliette K. and Leonarnd S. Rakow Research Library of The Corning Museum of Glass. 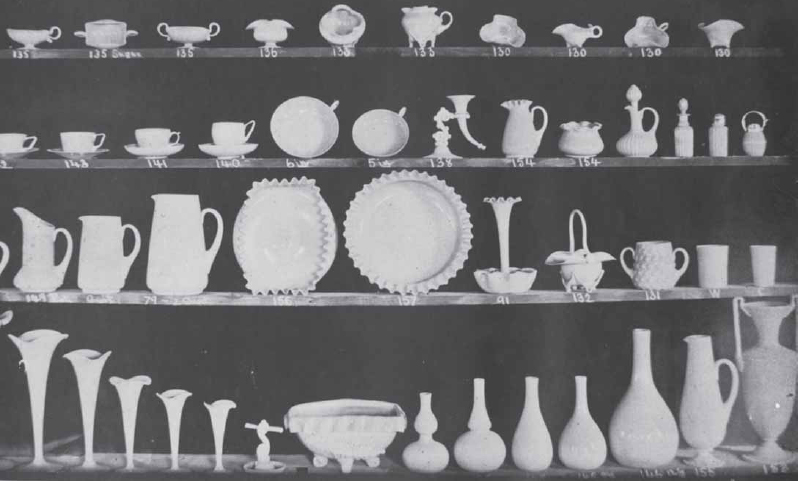 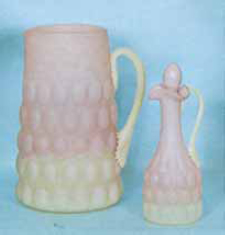 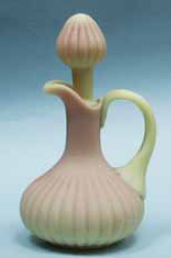 Fig. 20 This melon ribbed cruet is the only authentic cruet shape Mt. Washington Burmese was made in. This mushroom stopper is the most common original stopper but other original stoppers were also made including a faceted style and a stopper with a cup shape. The original is shown in the Mt. Washington catalog page, Fig. 17, 2nd row from top.