Brush-McCoy Pottery Co. expired over 75 years ago but the name is very much alive today. Despite never producing a single cookie jar while it existed, an ever growing number of new jars are marked Brush McCoy.

To understand the difference between Brush-McCoy and Brush McCoy, we need to go back to the first-quarter of the century.

The original pottery, Brush-McCoy Pottery, operated between about 1911 to 1925. It was formed by combining the companies of Nelson McCoy and George Brush. McCoy sold his interest around 1918 leaving Brush in control. The company name remained unchanged until 1925 when it became Brush Pottery reflecting Brush's sole ownership.

Brush Pottery is credited with being among the first American potteries to produce cookie jars. It introduced its first in 1929. From simple early shapes, Brush and other potters gradually introduced more elaborate figural cookie jars in the mid-1940s. Cookie jars continued to be an important part of the company's production until it closed in 1982.

Brush-McCoy Pottery, remember, went out of existence in 1925. It was Brush Pottery in operation 1925-1982, that made the cookie jars, not Brush-McCoy.

Original Brush Pottery cookie jars are among some of the hobby's most expensive. Its Hillbilly Frog, for example, produced in 1968, is valued at over $4000. Many other Brush Pottery jars range from $400 to $800.

Maybe that's why some manufacturer came up with the idea of marking reproduction cookie jars Brush McCoy. Although no similar mark ever existed, it began to be used on new jars around the mid-1990s. New marks also include include a paintbrush positioned between the words Brush and McCoy. All of the new marks are in raised molded lettering under glaze on the bases.

At first, the marks only appeared on reproductions of jars made by the original Brush Pottery. Now the mark appears on jars by other vintage makers. The reproduction jar in Fig. 4, for example, was made by Shawnee Pottery and is known as Mugsy. It is marked Brush McCoy as shown in Fig. 5. Finding Brush McCoy marks on jars known to originate from other potteries is an obvious clue that you're looking at a fake.

Some elements of the new mark are somewhat similar to original Brush Pottery marks. Perhaps the most confusing is the appearance of the letter W followed by a number. In original Brush Pottery cookie jars, the W indicated jars designed by Ross and Don Winton of Twin Winton Ceramics. The number corresponded to specific designs. The original elephant with ice cream cone, for example, has a W-8 molded in the base. The new Brush McCoy elephant is also marked with a W-8.

Although Brush McCoy was never used on vintage cookie jars, it causes collectors many problems. Ellen Supnick, one of the country's leading writers and dealers in cookie jars has been seeing the problem for a number of years.

"The Brush Mc Coy mark started turning up about in the early 1990s when lots of repros started hitting the market," said Supnick. "I tell people Brush McCoy never made cookie jars but they believe what they want."

Most of the reproduction jars with the Brush McCoy mark also show heavy pronounced crazing. Collectors often mistake the crazing as a sign of age which it is not. The crazing is added to new jars at the time of manufacture.

Ellen and Mark Supnick are the authors of The Wonderful World of Cookie Jars and several books on Shawnee Pottery collectibles. 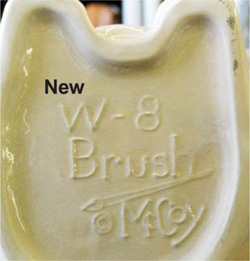 Fig. 1 New Brush McCoy mark with paintbrush and W-8, above, appears on the reproduction cookie jar below. 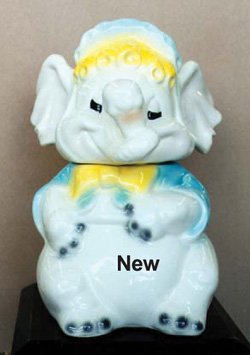 Fig. 2 The original jar, known as Elephant with Ice Cream Cone was originally made by Brush Pottery in the early 1950s. All raised molded Brush McCoy marks are recent. 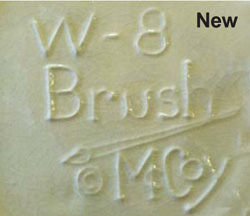 Fig. 3 Close up view of raised molded Brush McCoy mark in reproduction cookie jars. No mark like this ever appeared before the late 1990s. It is only found on reproductions. 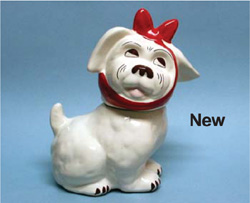 Fig. 4 This is a reproduction Mugsy cookie jar. The original was made by Shawnee Pottery. This reproduction is marked Brush McCoy in raised molded lettering as shown in Fig. 5. 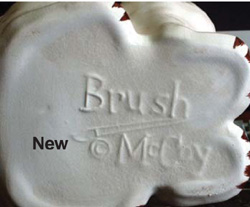 Fig. 5 The mark on the bottom of the Mugsy cookie jar in Fig. 4. The new Brush McCoy marks appear on reproductions of many potteries, not just original McCoy or Brush Pottery. 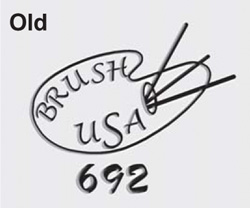 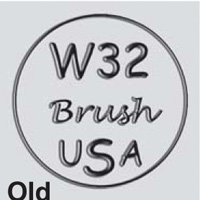 Fig. 7
Two typical marks of Brush Pottery that appear on vintage cookie jars, ca. 1940s-1982. The closest original Brush Pottery mark to include a paintbrush was the palette mark, Fig. 6. The W in Brush Pottery marks indicates the pieces designed by Twin Winton Ceramics as in Fig. 7. Most original marks were impressed or incised, not raised. So far, all the new Brush McCoy marks are raised molded marks. 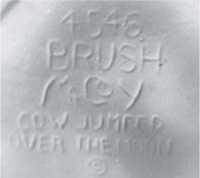 Fig. 8 This new raised molded Brush McCoy mark is found on the bottom of a reproduction Cow Jumped Over the Moon Cookie jar. The original jar of this name was made by the Robinson Ramsbotton Pottery Co.