Original molds were used to reissue a classic duo from Breyer's Horse and Rider series originally made during the 1950s.

The Breyer set "Cowboy and Prancer" shown here dates from 1954 and was one of the most popular Breyer releases. Like the original, the copy is detailed by hand and features removable saddle, cowboy hat, rifle and pistols. Cowboy and horse measure 9″ X 9″ X 4″. The pair comes in a reproduction of the original box. Retail price for the pair was $24.95.

ACRN learned of the reissues in May 1999. We immediately tried to buy a sample but were told the production run was already sold out. As far as we know, the reproduction has all the original markings since it was made from an original mold. 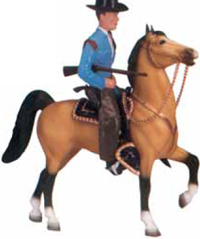