Defining "reproduction," "replica" and "vintage" glass is a challenge in itself. Identifying it is even more difficult. We use the term "replica" to describe glass that is a copy of an older design, with no intent to deceive the buyer–usually there is some small difference between them. But an uninformed or dishonest seller can pass replicas off as vintage. As Ronald Reagan used to say: "Trust, but verify."

We have said many times that the Bohemian glass industry keeps one eye on the past and one eye on the future. Glass school students are well grounded in 18th and 19th century techniques, as well as those that are the most advanced. Research facilities constantly produce new formulas and techniques for the entire spectrum of the glass industry: industrial, laboratory, architectural and hollow glass.

If you visit any large showroom in the Czech Republic today, you will find designs by such avant-garde artists as Vladimir Klein (Crystalex), Erika Houserova and JíYí Suhajek (Moser), and Paval Hlava (Egermann Company). Art glass galleries also include products designed by top glass artists but produced in smaller glass houses, such as that of Beranek or Ajeto.

Czech glass companies keep glass products in production for many years. Some of the Egermann-style, red-stained engraved glass has changed very little in the past 100 or more years. Nor has the white, high enamel technique depicting human, animal and floral motifs (painters call this high enamel "plastic"). Another example of classic Bohemian glass technology is overlay glass, cut to reveal the underlying color(s). This form of art glass has been in continuous production since the early 1830s.

Bohemian glass made between 1750 and 1940 can compete favorably with the glass industry of any country. Even so, Friedrich Egermann–one of the foremost glass innovators of his time–produced painted glass in the style of his predecessors Kothgasser and Mohn, who decorated glass in Vienna. The swartzlot (black) paintings of Ignatz Preissler have been replicated by every generation of painters for 200 years. There can be no doubt that the Art Nouveau and Art Deco glass made by Harrach and Loetz will serve as models for glass makers for many years to come.

Sometimes replicas occur as the whim of one particular person to challenge the past, but it also happens that a particular style will come back into fashion after 75 or 100 years: neo-classicism, neo-rococo and Second Biedermeier are all fashions that have had a successful revival.

One of the most accomplished painters in the Czech Republic is JiYi Hortensky. Hortensky (of Novy Bor and Kamenicky Senov) has worked closely with the Glass Museum in Novy Bor and others to produce replicas of Biedermeier and Rococo beakers. He faithfully copies the original with only the slightest change to set his work apart. His work is nearly always signed. Museums and collectors often use his work as substitutes for vintage examples that cannot otherwise be obtained.

The glassware produced by Heinrich Hoffmann and Henry Schlevogt in the 1930s is still immensely popular. Today it is being produced by Ornela under the Desna label. The Moser firm in Karlovy Vary produces innumerable designs dating back to 1900 and occasionally even earlier. The Exbor Studios had its beginning as the Lobmeyr workshop in Kamenicky Senov; it moved to Novy Bor and was incorporated into Egermann-Exbor in 1962. The 1950s saw an explosion of artists who either specialized in glass only or provided designs for glassmakers on an occasional free-lance basis. Legends such as Vera LiSkova, Ludvika Smrckova, Stanislav Libensky and Pavel Hlava created designs that will still be in production 100 years from now. Over and over glass has proven that grand designs are timeless.

Museum gift shops usually stock a fine collection of replica glass, often reminiscent of the type of glass traditionally produced in the area. In Prague, the Arts & Crafts Museum has a fine selection of articles that nearly equal some Loetz designs produced between 1914 and 1930. The Kamenicky Senov Glass Museum has a particularly nice grouping of liStovane, originally made by Franz Heide and by Jilek Brothers in the early 1900s. The Novy Bor Glass Museum has a large selection of both historical glass fashioned after the forest glass of the 16th and 17th centuries and copies of painted glass from the 19th and 20th centuries. Museums aren't alone in the sale of replicas; the Egermann Company and Crystalex (both in Novy Bor) produce a large variety of glass designed in the 19th and 20th centuries.

Whether a new piece is called a replica or reproduction is a matter to be discussed by philosophers and crooks. As one politician said: "I can't define it, but I know it when I see it." Like it or not, new glass is in the American market and often described as vintage. While new glass can be a great source of enjoyment when honestly represented, fraudulent marketing can be painful for the victim. 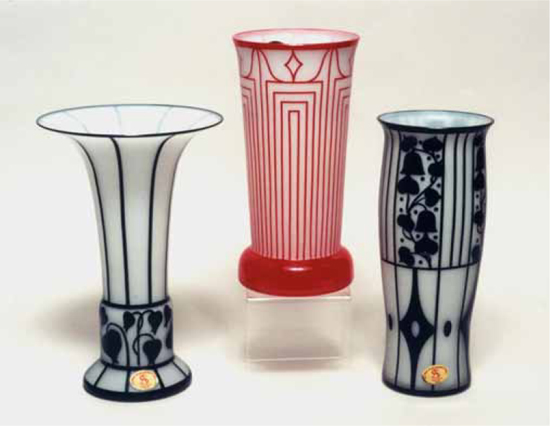 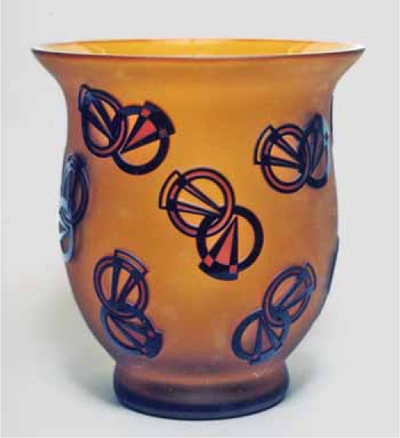 Fig. 2 New cameo vase, produced by Hadez21 in the 1990s. Amber glass with red and black overlay. This is an original Hadez21 sandblasted design based on similar Art Deco glass produced by Loetz in the 1920s. (See the Hadez21 website, listed page 5.) 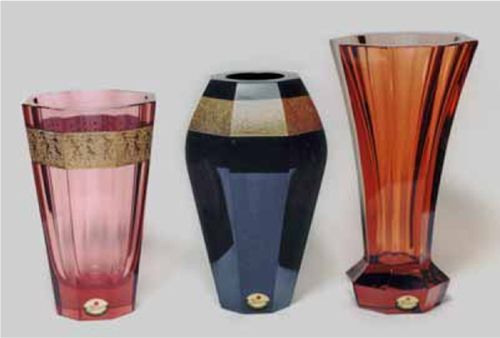 Fig. 4 Moser vases in continuous production. The left and center vases have oroplastic (acid-etched and gilded) decorations of Amazon warriors, designed in the 1920s. The right vase was designed in the 1940s. [Offered for sale on the Moser and Bohemia Crystal websites. See Mergl, Jan and Lenka Pankova. Moser 1857-1997, 1997, p98-99, 114-5 for a description of the Oroplastic technique.] 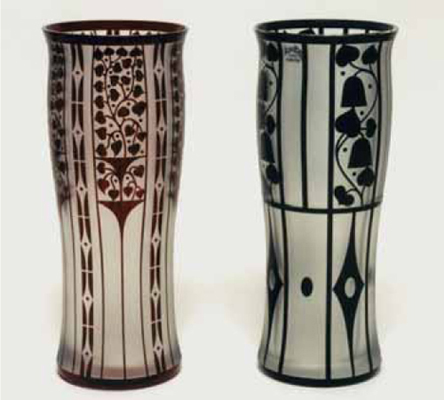 Fig. 5 Overlay vases, produced by Zbynek Votocek in the 1990s. The clear glass assumes a frosted appearance when the overlay layer is sandblasted away. Original of the left vase was designed by Josef Hoffmann for J.&L. Lobmeyr in 1911; the original was painted and called "Bronzit." The original of the right vase was also designed by Hoffmann. [See Neuwirth, Waltraud. Glass 1905-1925, Volume II, From Art Nouveau to Art Deco, 1987, p17, 178-9 for the original produced by Lobmeyr.] 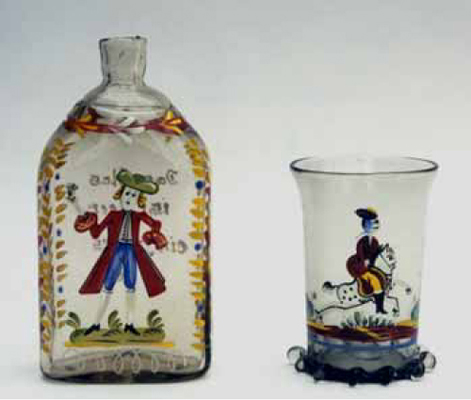 Fig. 6 Flask (brandy bottle) and drinking vessel painted with folk images in polychrome enamels in the 1990s. Originals date back to the late 18th century. They were made in so many places that most authors attribute them merely to "Central Europe" unless the provenance is clear. [See bohemianglassworks.com for current production. See Langhamer, Antonín. Bohemian Glass, Tradition and Present, 1991, p62 for similar items from the 18th century.] 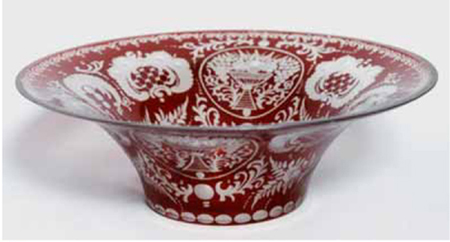 Fig. 7 Egermann-style bowl, red stain with stone-wheel Arabesque engraving. Produced by Egermann-Exbor in the 1990s. Friedrich Egermann invented the red stain in the early-1830s; many companies through the present day have produced it. [See the website: egermann.cz for current production. See Truitt, R. & D. Collectible Bohemian Glass, 1880-1940. 1995, p50-51 for catalog pages from the 1930s.] 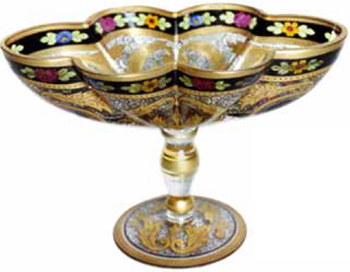 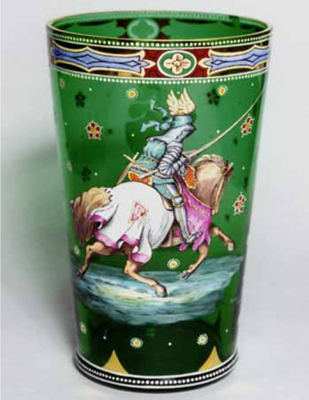 Fig. 9 Green beaker with a painted Alt-Deutsch knight on horseback, produced by Egermann-Exbor in the 1990s. Original was created in north Bohemia in the 1880s. [Offered on the Egermann Company website.] 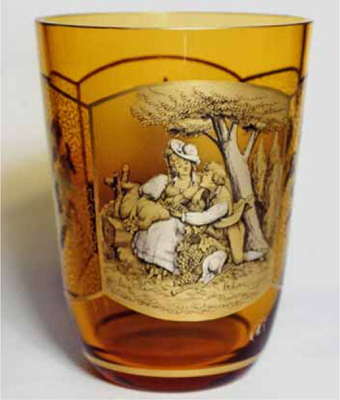 Fig. 10 Pensketch vase produced by Exbor in the 1990s. Amber glass, painted with a courtship scene in black enamel, gold and silver. Egermann-Exbor pieces sometimes are signed by the artist, such as Freudl or Freudlova. Originals from the 1920s-30s are often signed J.M. Pohl. Other artists have used the pensketch technique, including Walter Herrmann in Germany in the 1960s. 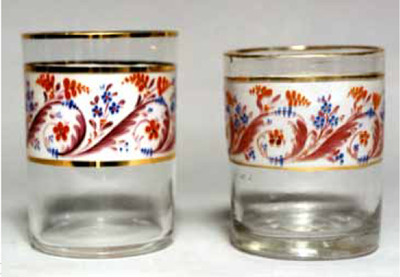 Fig 11. Hortensky chose brighter colors for his replica (left, 4¼" high), but the overall design remains very true to the original, right, which was made in the early 1800s. The white band is painted on the inside of the beaker; the flowers on the outside. 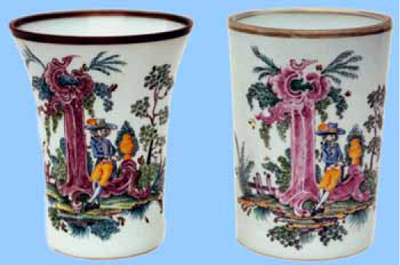 Fig. 12 Two Rococo-theme milk glass beakers with a cavalier, each about 4¼". Both painted in polychrome enamels by Hortensky in 1993. Glass on the left signed "Replic Hortensky 1993;" piece on the right signed "Copy Hortensky 1993." The piece on right has been artificially aged; it could easily find its way into a collection of 18th century milk glass. 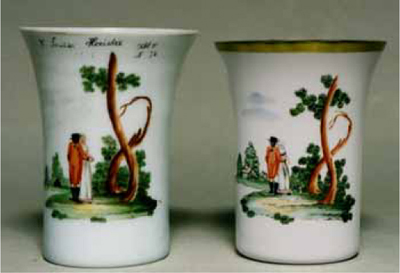 Fig. 13 Hortensky faithfully duplicates the general theme of the older painting, but gives himself artistic license to make minor changes. The original milk-glass beaker (left) dates to the mid-18th century; it is marked with unreadable painter's name, the word "Haida" (the German name of Novy Bor), and some numbers. The beaker painted by Hortensky (right) is signed "Copy J.H. 94." 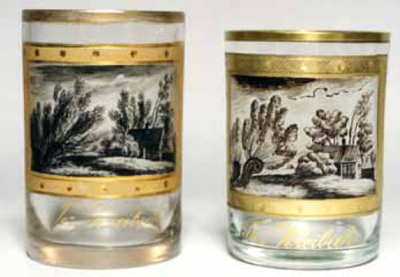 Fig. 14 The original (left) was painted by Ignatz Fritsche in the early 1800s. Below the painting of a stream and cottage are the words "Te. Kreibich;" on the back are the words: "Aus Lebens: freude zum neuen Jahr. IF" (translation–"From life: Joy in the new year.") Both beakers are clear glass, painted with brown and black enamels; the frame and dots are cut. Hortensky`s replica (right) is 4¼" high and has "J.H. 95" painted on the side.

Figs. 15-16 Two typical Hortensky signatures on modern copies. Signatures in gold are easily removed, usually with no disturbance of the glass surface. Signatures applied in colored enamels cannot usually be removed without leaving some scratches or otherwise disturbing the surface.