When the general public brings in stuffed shoe boxes, dealers never know what they'll find. Some times it is a treasure from an attic gold mine; other times just vintage trash years overdue for the landfill. Nine out of ten times, those shoe boxes contain baseball cards. Between Ken Burn's Baseball series on the Public Broadcasting System (PBS) and well publicized auction prices, it seems everyone, including general line antiques dealers, have been infected with baseball card craziness.

The problem with baseball cards is that a little information is not only dangerous but expensive as well. We've all heard of cards worth thousands, so we're tempted with the $25 auction lot and the $50 shoe box full brought in to the shop. We convince ourselves, "if there's only one good card, it's worth it" and we spend our money with more hope than knowledge.

Where new cards come from

Like most reproductions, most new baseball cards begin as inexpensive substitutes for expensive originals and are sold as such. But with slight alterations, many new cards are offered as old in the collectibles market.

Most of the altered or artificially aged baseball cards seen today have been taken from inexpensive books (Figs. 2-3) with pages of full color copies of original cards. The cards are printed on light weight cardboard with perforations just a like a postage stamp for easy removal (Figs. 4-5). Perforations may be on 4, 3 or 2 sides depending on a card's location on the page. Perforations are almost never found on original cards and should be considered a warning sign of a reproduction. The books shown here cost about $5 each.

Cards from these books are frequently altered to "enhance" their age. The most common step is simply trimming the perforated edges into smooth edges. Next, a reprint warning (Fig. 6) which is on most but not all of the new cards in the books above, is erased. Then the card is smudged and stained to simulate age.

The result can be a card like the one shown in Fig. 7 that can fool even advanced collectors. This card began as a Dover reprint, then it was trimmed, had the reprint warning erased and was artificially soiled and stained. It then was purchased as old and eventually was featured in a book on sports card fakes Sportscard Counterfeit Detector (SCD) by Bob Lemke. .

Most old cards with advertising--like Big League Chewing Gum, Cracker Jack and others--appeal not only to the baseball card market but to collectors of advertising as well and this can add to the confusion over new and old. Most books on baseball cards, for example, at least mention the existence of reproduction cards. However, if you're a general line antiques dealer you're more likely to consider such cards as "advertising" and look at reference books or price guides on advertising items which seldom give warnings about such fake cards.

One such group of cards advertising Fro-joy ice cream is well known (and avoided) by baseball card collectors but relatively unknown among general line dealers (Figs. 9-10). These cards were originally issued as a sheet of uncut cards in 1928 and feature Babe Ruth. The 8 x 11 1/2" cardboard sheets have been reproduced off and on since the early 1970s. A new sample came complete with brown stained edges for under $5. In his book, Bob Lemke states that as many as 99% of the Fro-joy cards currently in the market are fakes. Lemke's advice on the Fro-joy Ruth cards? Don't even bother to check the price. Even if it were an original sheet, the market is so saturated with fakes there is zero demand for authentic cards.

And if you want lots of cards in a hurry, there are the "dealer" specials. Bundles of cards in lots of 250 and up costing as little as 1 to 2 cents each. All new but advertised as "out of date" and "collectible" (Fig. 12).

The popularity of baseball has created a demand for images that cards alone have not been able to meet. So now there are also reproductions of various other images. The two most common are: 1) digital fakes (images generated on computers); and 2) reproductions of original photographs particularly photo postcards.

Original photo postcards are actual photographs printed on a special photographic paper which was accepted by the U.S. Post Office as an official postcard. The backs of these cards generally include the word "Postcard" and have a place for an address and a brief message.

Postcard photographic paper is still sold and it is relatively easy for an amateur photographers to make copies of vintage images in their home darkrooms. One source in Connecticut has made over 200 different new postcards including many baseball related images, two of which are shown below. All the new photo postcards from this source have sepia toned (brown) images on front with artificial stains on the back.

Digital fakes are made on home computers with image editing software. These can be cards, paper labels applied to various products, covers from purported period sports publications and a wide variety of other goods.

As a general rule, avoid any baseball card that has perforations along the edge. Don't be fooled by what appears to be vintage advertising messages on baseball cards such as Cracker Jack and other collectible companies. Keep in mind that large lots of new cards can be purchased in bulk for as little as a penny apiece. Reprint warnings and modern copyright dates are easily erased.

Use a black light to examine the paper in any suspected card or photographic image. Paper used in virtually all new baseball cards, photo postcards and computer fakes fluoresces a bright white under long wave black light (some authentic baseball cards made after the mid to late 1950s may also fluoresce). Black light will also usually detect any erased spots that may not be visible in ordinary lighting. 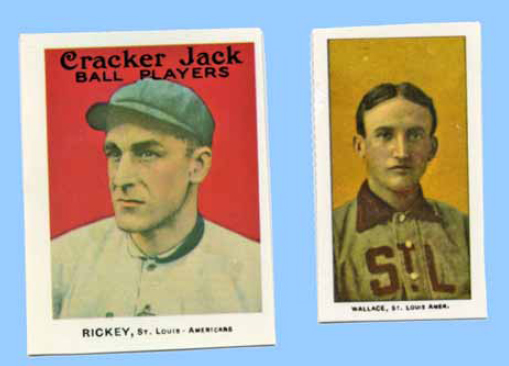 Fig. 1 Cheap copies of early baseball cards like the two above wholesale under $1 each. Cards with advertising of well known companies like Cracker Jack or tobacco products appeal to many buyers who know little about baseball cards. 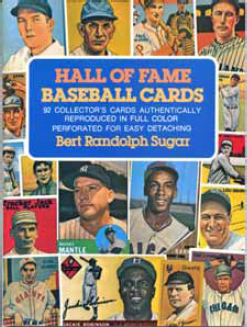 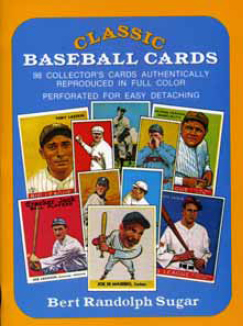 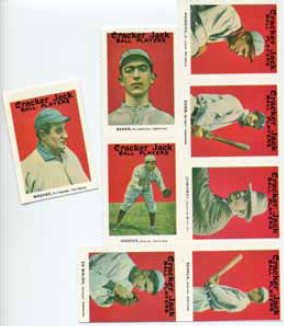 Figs. 2-5 Many rare early cards have been reproduced in books like the ones shown in Figs. 2 & 3 above. The cards are printed side by side in full color on cardboard page as shown in Fig. 4 . Each card has perforated edges for easy removal from the page, see close up, Fig. 5. Virtually no old baseball cards have perforated edges.

Fig. 6 Reprint warnings appear on some but not all of the new cards found in books. These warnings are easily erased. 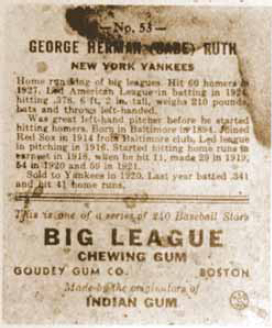 Fig. 7 Back side of new Babe Ruth Big League Chewing Gum card taken from a new book and altered to appear old. The perforations are trimmed, the reprint warning erased, and the card has been stained and soiled. 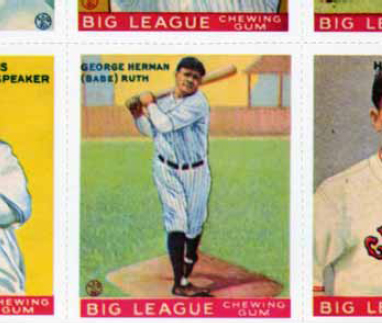 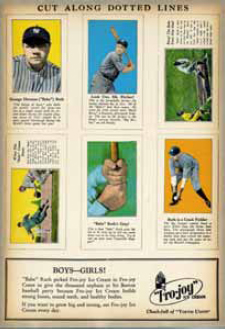 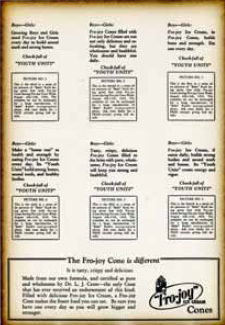 Fig. 10 Don't be mislead by the "period" advertising on new cards. The new Fro-joy ice cream cards with Babe Ruth shown here have been avoided by baseball collectors for years. But many general line dealers don't know the cards have been widely reproduced since the 1970s. 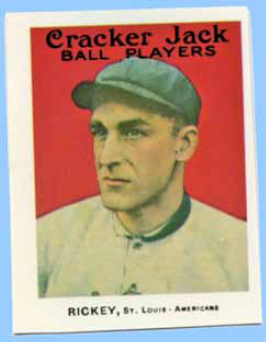 Fig. 11 Original baseball cards offered by Cracker Jack as a premium average about $145. Many of the Cracker Jack cards are reproduced in the new books. 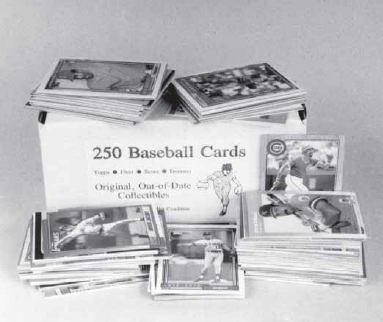 Fig. 12 It's easy to fill shoe boxes with baseball cards--just buy new cards in bulk. This box of 250 cards was purchased for under $5, just 2 cents apiece. They have to be collectible--it says so right on the box! 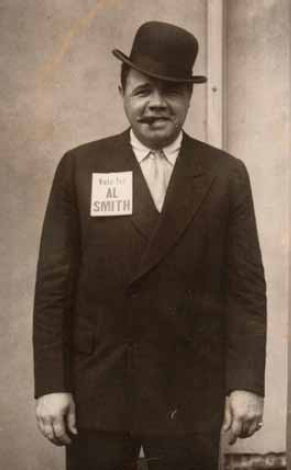 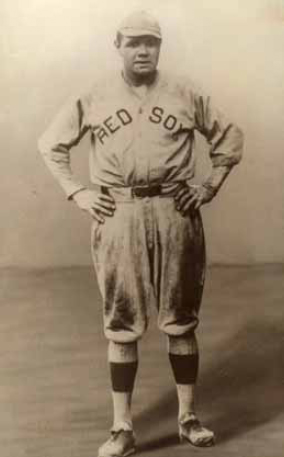