One of the very earliest and rarest toy robots ever produced, "Atomic Robot Man" (ARM), is available as a reproduction. Originals can sell for $500-$1000 and more; the reproduction retailed for $20.

ARM is a 5" high tin plate windup originally made in Japan during the American occupation following World War II. It is sometimes, but not always, marked "Made in Occupied Japan". The original manufacturer is unknown.

One of the most interesting features of this robot is its distinctive way of walking. Rather than shuffle along on wheels like later battery powered robots, ARM's windup mechanism drives a pointed spike hidden under each foot. The spike jabs down and completely lifts the legs on each step. A removable key fits into the left hand side of the body.

Both old and new are virtually identical in mechanical operation, size and general construction. A quick glance in a book and both versions would appear to have an almost identical appearance as well. There are several details, however, which you can use to separate old from new.

First, the majority of known original ARM robots are made in two colors. The body and legs are one color; the arms and head are a second color. Almost all originals have khaki brown bodies and legs with gray arms and heads. The new robots are one color only: blue, silver or red. Although some promotional literature shows a new robot in old two-tone colors, none of the new robots we have seen has been anything but a single color.

Next, look at the gauges and dials on the robot's body. The original has only three dials where the new has five (Fig. 5). Also note that the large circular dial is on the left chest of the reproduction; it is on the right side of the original. Note, however, that the gauges appear correctly on the new box although they are incorrect on the robot itself.

The original key is plain cheaply stamped sheet steel similar to those found with other Made in Occupied Japan toys. The new key is cast pot metal and embossed with the toy distributor's name "Schylling" (Fig. 4 ). New boxes are easy to spot: they have the modern bar code and various safety warnings for small parts (Fig. 3). Those features are missing on original boxes.

One last caution. When checking book references or reading advertisements, do not confuse Atomic Robot Man with Mr. Atomic a battery powered robot made in the 1960s. Mr. Atomic, also reproduced, was originally made by Yonezawa and distributed by the toy company Cragstan. Originals are is usually marked Cragstan, Made In Japan. 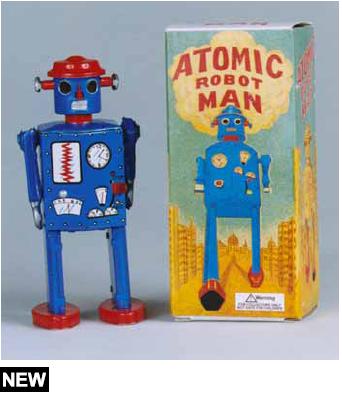 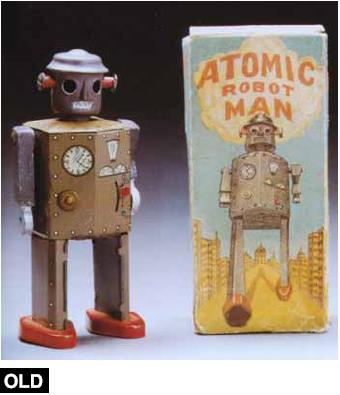 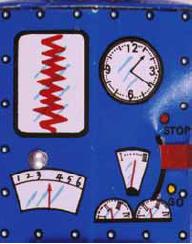