A new line of reproduction cameo glass signed "Charder" is now available. Although the samples shown in this article are all lamps, the new signature was most likely used on vases and other shapes as well.

Original Charder marks appeared on glass manufactured by the brothers Ernest and Charles Schneider. The formal legal name of their company was Societe Anonyme des Verreries Schneider, or simply translated, Schneider Glass Company. It was formed in 1917 and lasted until 1932 when it closed due to the Depression. After World War II, Schneider descendants of the original founders made clear crystal under the Schneider name until 1981.

Some persons are under the impression that Charder is the name of an independent glass artist or a separate glass company. In fact the name Charder was a trade name of Schneider Glass. Charder is formed by the beginning and ending letters of Charles Schneider: the first four letters of CHAR-les and the last three letters of Schnei-DER.

The original Charder name appears in raised script on the body of a line of Schneider cameo glass called "La Verre Francais". The La Verre Francais line was generally made of a thick usually mottled glass body with a very thin highly polished overlay in contrasting colors.

The new Charder pieces shown in this article were made new in China (Fig. 7). They were available starting in the spring of 1999. Wholesale price was $95 each.

Both background and overlay of the reproductions have dull frosted surfaces. The overlay of original Charder lamps is highly polished and very shiny. New lamps are marked "Charder" only in raised letters. Original Charder was almost always also marked "La Verre Francais". If a piece marked Charder is not also marked La Verre Francais, there is a very good chance it is a reproduction.

New Charder lamps were made in a very limited color range. Almost all the new lamps have predominantly amber, yellow and orange backgrounds (except Fig. 3). The glass in the overlays in all the lamps examined for this article is amber/orange glass with black mottling. Sometimes the overlay appears to be almost entirely black but it is the same amber/orange and black mixture.

The new lamp in Fig. 3 is unusual because it has a wire hole drilled in the side of the base. Power cords of old original lamps almost always ran directly to the lamp socket or if the wire went down into the base, it passed out of the base under a special fold or curve of glass. Drilling holes in glass has become practical only with modern carbide tipped bits. Drilling holes in old original glass at the time of manufacture was virtually unheard of in original bases.

Designs on new lamps have been taken directly from originals. The designs on lamps in Figs. 1, 3, and 5 are virtual identical copies of patterns found on original pieces marked Charder/La Verre Francais.

Be especially alert for new shades and bases "married" to old hardware. 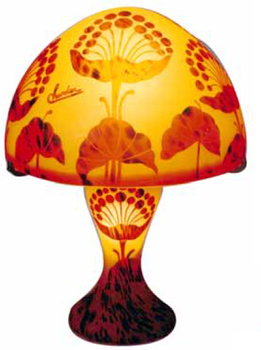 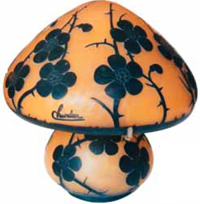 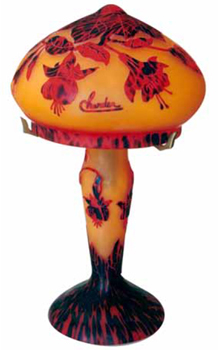 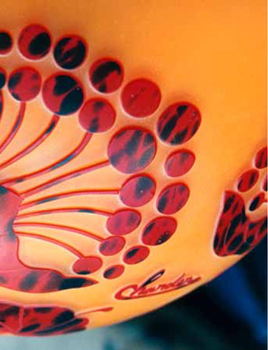 Fig. 6 Close up of single acid cutting on new Charder lamps. Both overlay and background are frosted on the new lamps. 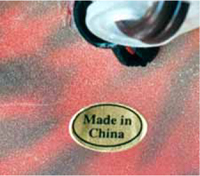 Fig. 7 Made in China paper label on new lamps as delivered from reproduction wholesaler.