Interest in Aladdin lamps has built up a demand for almost anything related to the lamp's history. This includes new lamp brochures, posters and signs, such as the two new pieces shown in Figs. 1 and 2.

The new $1 Dollar Allowance sign (Fig. 1) is 10 3/4" wide by 16 inches high. It is printed on white stock in two colors: one color is a red leaning towards orange, the other is black. Similar colors are used in the new Aladdinize sign (Fig 2). It is printed in orange, yellow and black ink also on white stock. The size is about the same too, measuring 11 1/4" wide by 18" high.

The paper used in the new signs is heavy, but not stiff; it can easily be rolled up. These samples were purchased recently, but both signs have been available since about 1974. Under long wave black light, the new white paper flouresces purple-blue; the orange and yellow inks also glow brightly.

New 'parchment' shades are another example of non-glass Aladdin reproductions (Fig. 3). The new 14" shades are available in seven old patterns: Sailing Ships (shown), Fox & Hounds, Log Cabin, Wagon Train West, Coach & Four, Ducks and Lake (Flying Ducks). Original shades were made of a highly translucent material Aladdin named Whip-o-Lite. New shades are made of only stiff paper. As a result, new shades are much more opaque -- that is the new paper shades don't let as much light through as the old original genuine parchment shades.

Once you handle an original parchment shade, the difference is quite obvious. But until you can, here's a good test (see illustration in Figs.4- 5 above). Hold the shade up to a source of light-- a lightbulb, lamp, ceiling fixture, sunny window or a strong flashlight. Now place your hand inside the shade touching the side of the shade nearest your face. If your hand creates a distinct dark shadow, it is very likely an old parchment shade. If you see just a small indistinct patch of shadow or no shadow at all, it's probably the new more opaque paper shade.

There are many new Aladdin-styled glass shades currently available. Illustrations of three of the most common new shades–models 201, 401 and 501–are shown here alongside old originals. 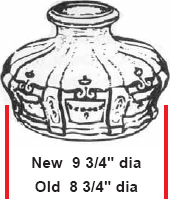 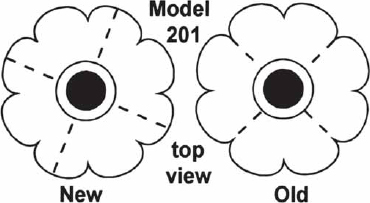 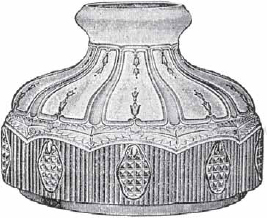 Reproduction 501 Model #9 shades appeared in 1984. The domed tops of old shades were painted white and fired; this area on new shades is etched. Old shades have only 8 panels in the dome; new shades have 10 panels and are smaller in diameter. 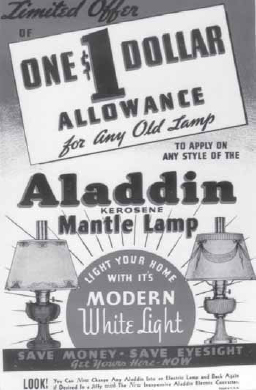 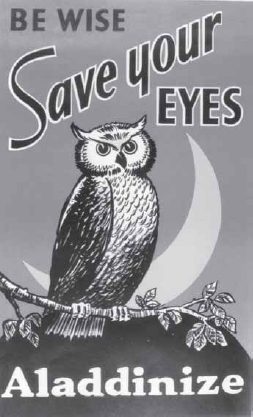 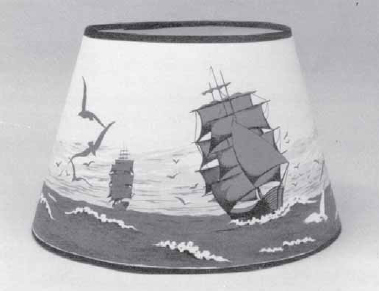 Fig. 3 "Sailing Ships", shown above, is one of seven old patterns being used on new Aladdin 14" shades. The new shades are made of heavy paper; the old originals are translucent parchment. 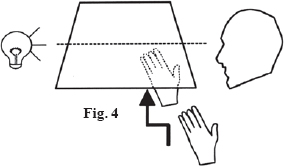 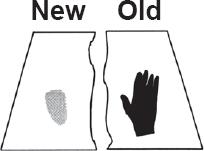 Figs. 4-5 Original Aladdin parchment shades are more translucent (let more light pass) then the new shades. Test a shade by holding it up to a source of light. Then put your hand inside the shade with your hand flat against the shade. Your hand will create a solid shadow in old shades; only a small spot or no shadow at all in the new.