Sculpture by almost every important artist is widely available as a reproduction complete with artist signatures. Widely offered and represented as "bronze", almost all these new sculptures are cast iron or zinc. The vast majority are poor quality, low priced mass produced objects made in China for antique reproduction wholesalers and decorators worldwide. More and more often, these imitations are being mistaken as originals through online sales and absentee bidding. Knowing just a few basic facts will protect you from virtually all the mass produced copies.

The metal content of bronze in fine art sculptures is generally an alloy of around 90% copper and about 10% tin. Small percentages of zinc and lead may also be added to improve strength or handling in the casting process. The metallic content, however, is less important than the combination of skills related to creating a final work–the artists model, the mold makers ability to duplicate the model, the pouring of hot metal and quality of patina.

Patina is the surface coloring applied to the finished bronze, generally an acid treatment applied with heat. This duplicates the natural oxidation which occurs over many years of exposure to air.

Original bronze sculpture of the 19th and early 20 century were rarely permanently attached to separate non-bronze bases. Customers chose their own bases to match their particular decorating needs. By contrast, virtually all the reproduction metal sculptures are permanently attached to imitation marble bases (Figs. 2-4). This fact is generally concealed under a rubber like pad. Removing the pad shows how the statue and base are joined.

The vast majority of the new bases are actually plastic. You can test a base (in a hidden spot) with any sharp blade. Plastic will peel off in shavings as shown in (Fig. 6). Be suspicious if you see the same base on different sculptures offered by the same seller. The new bases are made in limited shapes and the same shapes are used for many different new sculptures.

Genuine marble, however, is no guarantee of age or quality. Some of our samples did have inexpensive died marble bases. The hardware visible in the bottom was is the main clue to their recent manufacture. Also watch for modern fasteners especially Phillips head screws which were never used in vintage sculpture in any metal (Fig. 7).

Another easy clue to a recent product is a metal tag (Fig. 9) with the sculpture's title and the artist's name. Virtually no originals have these tags. Some vintage sculpture does have similar tags on presentation pieces but those clearly state who is presenting the sculpture, the occasion, date, etc., not just title and artist.

Given the low wholesale prices, it shouldn't be surprising to find that most new "bronze" sculptures in the antiques market are really cast iron. How can you tell? It's easy; use any small magnet.

Don't be fooled by false "patinas". Regardless of the color of the surface, if the magnet sticks, the piece is made of iron. There's no other explanation.

Many of our samples also had small patches of red rust. These were especially common down in crevices where moisture was apparently slow to evaporate. This is why all the iron statues come packaged with the little bags of desiccant (silica gel) to absorb moisture just like you'd find with delicate electronic equipments. Don't be put off if a seller trys to explain away rust as "casting powder" or other nonsense.

About 90% of reproduction metal sculpture has a signature of some kind so don't use a signature as your only test of age. Some of our samples with purportedly French artists names on the sculpture had Chinese characters under the pad on the base (Fig. 15).

Virtually all reproduction "patina" is either a thin metal plating, a paint or a stain. The most obvious clues are runs and drips in the painted patinas. True acid based patinas never have runs or drips. Another easy to spot clue is a chip or flake. No true patina flakes or chips but paint does (Fig. 17).

The most obvious differences between old and new are in the details. This is particularly true in hands, hair and eyes in human subjects; paws/hooves, fur and eyes in animals. Beware of unrealistic ball-shaped, club- or flipper-like hands with no clearly defined fingers (Figs. 19, 21). Hands that hold or grasp something are almost always poorly made. Many times a hole has simply been drilled rather than cast (Fig. 19).

Also be alert for crude welds and fiberglass fillers used to fill casting gaps (Fig. 20) in new sculptures. As they were copied, many sculptures have acquired Oriental facial features especially eyes (Fig. 22). It is also common for prominent areas of the sculpture, like the face, be missing patina (Fig. 22).

The guidelines listed above are for mass produced reproductions. One of a kind sophisticated forgeries are more difficult to detect. Do not attempt to identify fake bronzes by color, weight, sound (tapping), or subject. None of those methods are reliable. 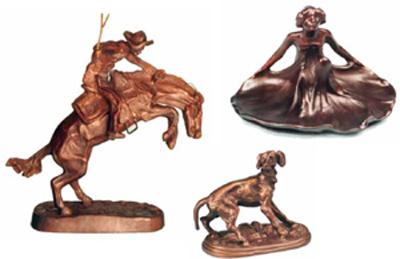 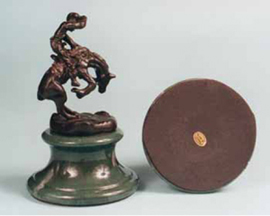 Fig. 2 Any statue attached to a base is most likely new. Bottoms of new bases are covered over in a rubberlike glued on pad. This is a typical bronze-appearing new statue on what looks like a marble base. 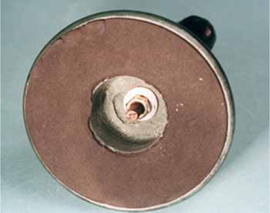 Fig. 3 The pad on the base is more for hiding the hardware connecting the statue than it is for protecting the surface on which it sits. Here the pad has been cut away. 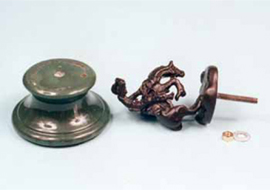 Fig. 4 Statue and base shown separated. Note the threaded rod extending from the bottom of the statue. 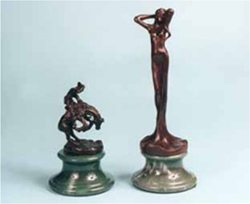 Fig. 5 Watch for the same base on different statues. The mass produced reproductions use only a few styles of bases.

Fig. 6 What appear to be marble bases on most reproductions are really plastic. A sharp blade will peel shavings like these off plastic bases. This was done around the bolt hole in the bottom. 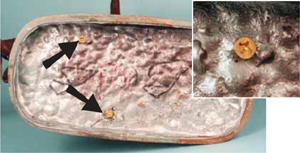 Fig. 7 A typical new cast metal base on a large statue. In this case modern Phillips head screws have been used to reinforce the connection between the base and the statue. 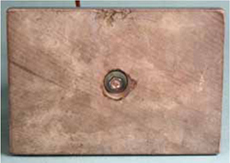 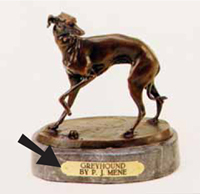 Fig. 9 Applied metal tags and plates like this with titles and artists names are usually an indication of a reproduction. Such tags rarely appear on vintage bronze sculptures except for special presentation pieces. 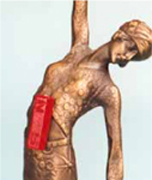 Fig. 13 The majority of new metal statues include an artist signature. Most new signatures, like this Frederic Remington, are of well-known artists.

Fig. 14 Other new sculptures have signatures of unknown artists or deliberately unreadable signatures like the one above.

Fig. 15 These Chinese characters, presumably a production code of some sort, appear on the base of a artist signed "French bronze". The characters were hidden under the rubber pad on the base.

Fig. 16 Beware of sudden or dramatic color changes in surface color or "patina" which is a clue to a modern reproduction.

Fig. 17 True patina does not flake or chip. Most "patina" on reproductions is actually paint and often has chips or flakes. 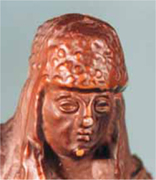