Metal pins first issued in the 1970s which feature Buster Brown and Tige are being soldered to hatpins, toothpick holders, napkin rings and other objects. Such objects with recently attached pins are then represented as vintage advertising pieces. Faked pieces have brought fairly substantial sums. A hatpin (Fig. 3) made with one of the 1970s pins brought $75 in an on-line auction.

The 1970s pins are quite common and generally sell for $2-$5 each in mint condition (Fig. 1). Such pieces were available as pins only; they were never fastened to other objects. Pins have a clutch-type gold-toned fastener which grips a short post on the back. They are 1″ in diameter and made of stamped metal with a silver-tone finish.

There are several clues that the 1970s pin has been recently joined to the hatpin. First, there are large puddles of solder surrounding the finding. This is the first sign of a problem. Next, the finding–the decorative fitting that hides the joint where the pin joins the hatpin shaft–is a gold color. The Buster Brown pin is silver. The color of all original findings virtually always match the color of the decorative object to which they are attached. The finding itself is far too large for the shaft (Fig. 5).

You may find these Buster Brown pins attached to genuinely old objects such as vintage napkin rings and toothpick holders. Just keep in mind that the pins were never made until the 1970s. No object with one of these pins could possibly be older than the 1970s.

Fig. 1 Buster Brown pin from 1970s on its original mounting card. These pins are common and sell for $2-$5. 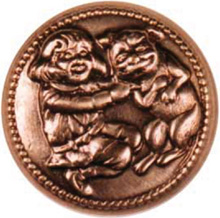 Fig. 4 A random puddle of solder, arrow, is always suspicious whether you're inspecting a hatpin, napkin ring or any other object.