New pitchers were produced that look very similar to vintage Jadeite Anchor Hocking and Fire-King pitchers in Pillar Optic pattern, often called Melon. The new pitchers were made in China and imported by Gibson. The only marking is a white paper label (Fig. 10.)

Original Jade-ite Anchor Hocking ball pitchers were made in a smooth surface, no pattern (with and without advertising); Manhattan (horizontal ribbed); Target (sometimes called Bull's eye); and Swirl (curved ribbing). No old ball pitchers in Jade-ite have ever been found in Pillar Optic although a few old pitchers in that pattern have been found in Ivory. Swirl has a sort of backwards S pattern from top to bottom; Pillar Optic is a series of evenly spaced parallel ribs running from top to bottom.

You can easily tell the difference in the old and new Pillar Optic pitchers by measuring from the base to the spout. The old is 6" from the base to the lip and the new is 5 ¾" from the base to the lip. New pitchers are also about twice as heavy as new. The old is about 2 ¾ pounds; new is close to 4 ½ pounds. There are also dull areas, mold imperfections, broken bubbles in the surface and other flaws. The quality of new handles varies from piece to piece. Some new pitchers have handles attached almost exactly like original handles while other new handles are not fully attached to the body. New ball pitchers do not have a permanent mark but neither do the originals by Anchor Hocking.

The jadite Pillar Optic knockoffs retailed for $24.95. Some have been sold on internet auction sites, for as high as $200. Auction prices came down as buyers learned that the pitchers were in their local Target stores.

Target also sold a clear crystal version of the Pillar Optic pitcher. The clear pitchers are made by Anchor Hocking in the U.S.A. and have the label shown in Fig. 11. New clear pitchers may have also been made in the swirl pattern, but this has not been confirmed.

Anchor Hocking had intended to reintroduce a number of pieces of the Fire-King restaurant line in conjunction with Restoration Hardware. The initial quality was so bad, the project was cancelled. The test pieces that have made it into the public market appear to be the Fire-King D-handled mugs (Fig. 17) which initially surfaced in the Lancaster, Ohio area. New mugs are taller than the vintage D handled mugs, measuring 4″ tall, and 3 3/8" across the opening. Old cups are only 3 ½" tall and 3 ¼" across the opening. The mark is also different. New mugs are marked "Anchor Hocking Fire-King 2000" and the anchor logo. Old mugs have the original molded mark, "Fire-King, Oven Ware, Made in USA" (Figs. 19-20). New mugs are also low quality with numerous flaws.

The biggest surprise is how similar the new Cracker Barrel 6 oz. round horizontal ribbed shakers are to vintage shakers of the same shape by Jeanette (Figs. 21). The key difference is the neck on the new (Fig. 22) Old lids fit on these new shakers. All of the Cracker Barrel pieces are a mint green, very similar to original Anchor Hocking Fire-King Jade-ite.

Editors note: The great majority of new jadite made in China cannot be used in microwaves. Some collectors have been buying new thinking it would be fun to serve food in jadite but don't do it. Chinese made jadite can shatter in microwaves. It is also very sensitive to sudden changes in temperature. 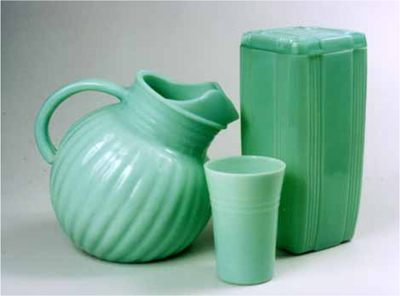 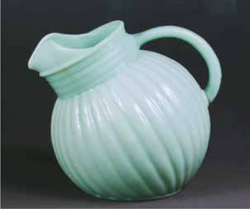 Fig. 2 New jadite ball pitcher is very similar to old pitchers in Pillar Optic pattern by Anchor Hocking. This sample was on sale for $19.95 at the local Target department store. New pitchers have been selling on eBay for up to $200 and more. Made in China. 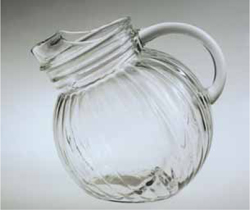 Fig. 3 New clear crystal ball shaped pitcher sold in Target department stores for $8.99. Same pattern as pitcher shown in Fig. 2. The clear pitchers are made in the U.S.A. 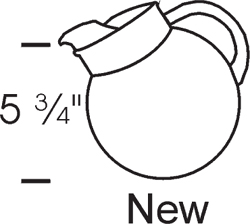 Fig. 4 New Pillar Optic pitchers are slightly smaller than originals. Base to lip is 5¾″. 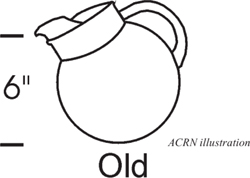 Fig. 5 Original Pillar Optic pitchers measure 6″ from base to lip. 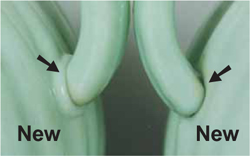 Fig. 6 Quality of handles on new jadite ball pitchers handles varies from piece to piece. The handle on the new pitcher on the left is virtually identical to an old handle. The new handle on the right is missing the "socket" and there is a gap between body and handle. 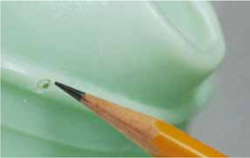 Fig. 7 This large broken buble is typical of the many flaws found in most new jadite pitchers. Other common flaws are obvious swirling in the glass surface, inconsistent finish going from shiny to dull and obvious mold seams. 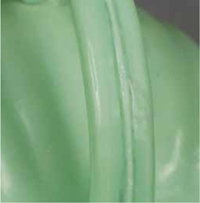 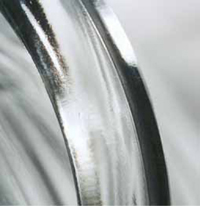 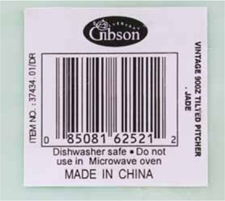 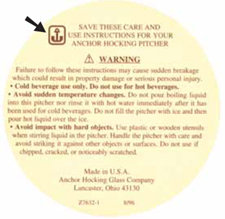 Fig. 11 Cardboard disc in new clear crystal ball pitchers made in USA. Note Anchor Hocking trademark in upper left. It is not known if Anchor Hocking is the actual manufacturer or if the work is done by another glass maker for Anchor Hocking. 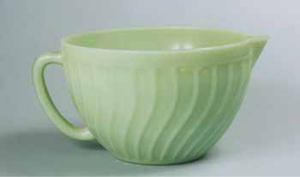 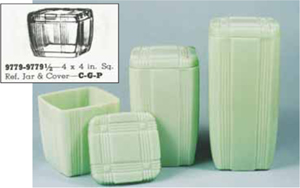 Fig. 15 Original Crisscross pattern 4″ × 4″ refrigerator jar by Hazel Atlas from original catalog shown in upper left. Above, new jadite jars from China in Crisscross patern, 5″-7″-9″. No vintage Crisscross was made in jadite. 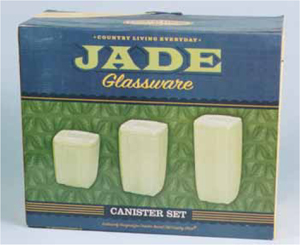 Fig. 17 One of the sample Anchor-Hocking/Restoration Hardware Jadeite mugs is shown above, left. The new mug measures 3 3/8″ across the opening and 4″ tall. Shown on right is vintage Anchor Hocking Jade-ite D-handled mug, measuring 3 ¼″ across the opening and 3 ½" tall. Mark on new cup shown Fig. 19. Courtesy The Fire King Monthly

Fig. 18 Paper label to be used on reissues of Anchor Hocking's Jade-ite restaurant line through Restoration Hardware (see ACRN, Dec. 2000). Only samples were made; the full line was never released due to quality problems. 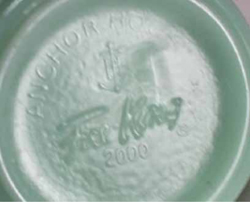 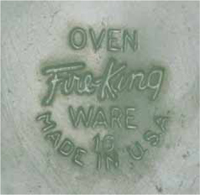 Fig. 20 Original molded mark that appears on most, but not all vintage Anchor Hocking Fire-King Jade-ite. ACRN photo 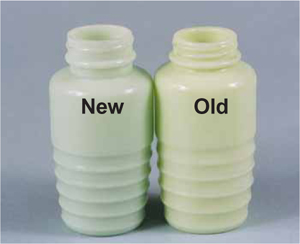 Fig. 21 New jadite round shaker, left, is a close copy of original jadeite 6 oz. shaker by Jeannette, right. Sizes are virtually identical, about 4¼″. The key difference is the top, see Fig. 22. 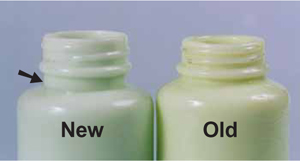 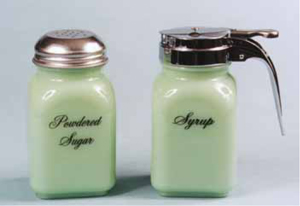 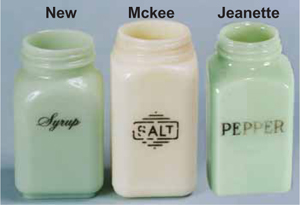 Figs. 24 Comparison of new Rosso shaker to old McKee* and Jeanette square shakers. Top opening in Jeanette is only 1¼″ which makes it easy separate from the other two shakers which have top openings of 1 5/8″. New square shaker is closest in appearance to McKee original. See Figs. 25 & 26 for key differences. Although a large percentage of old McKee shakers are marked, many marks are very faint and hard to see. The best test for age is to look at the bases and necks.
*McKee shaker shown is custard, but same mold was used for jadeite,

Fig. 25 Rosso shakers have a distinct neck between the shaker body and threads. McKee originals do not have a neck.

Fig. 26 Original McKee has a horizontal mold seam near the base; no similar seam on Rosso shaker. Rosso shakers have a stepped raised base; McKee base is concave, domed inward. 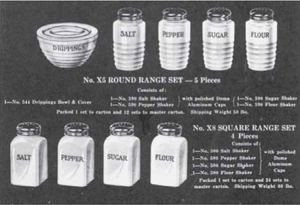 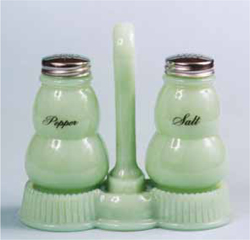 Fig. 30 New jadite 3¾″ shaker set by Mosser Glass, distributed by Rosso Glass. No permanent mark. This shaker body is also made as a spice set with various names such as Nutmeg, Flour, Oregano, Paprika, etc. Shakers, $7 each wholesale.

Fig. 31 Original Crisscross pattern covered butter dishes by Hazel Atlas from original catalog. One size for a quarter pound stick; the other size to hold a 1 lb. block. Original butters are known only in clear crystal, pink, blue and green transparent. Some original ¼ lb butters are known in fired-on factory painted pale green but not in true jadite. 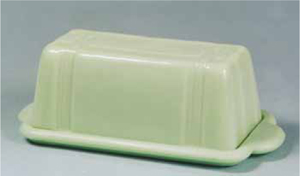 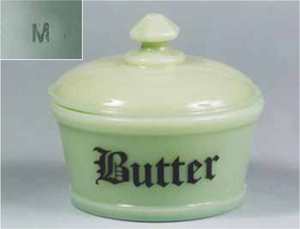 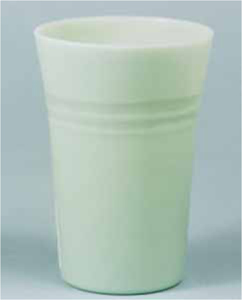 The authors Randy and Dixie Hardesty have been collecting and selling Fire King and Jade-ite for many years.