In an experiment conducted in late 1997, 40 jewelers and pawn shop owners incorrectly identified synthetic moissanite, a new diamond substitute, as genuine diamond. They were fooled because they all used what was until then the most widely used diamond test, a thermal conductivity probe.

Synthetic silicon carbide has been produced in laboratories since 1893. One of the early experts was Edward Acheson who developed the material as an abrasive which he called carborundum. It is still used in sandpaper, grinding wheels and other industrial applications. Manufactured bulk silicon carbide is one of the most common materials: 69,900 metric tons were produced in the U.S. in 1998, 223,000 more tons were imported. (Balazik, U.S. Geologic Survey, 1999).

Since the late 1940s, research has focused on developing large single crystals of synthetic silicon carbide (moissanite). Such crystals were sought after for use as semiconductors in the electronics industry and, it was always hoped, imitation diamonds. Gem quality colored moissanite was not produced until 1990. Colorless synthetic moissanite suitable as a diamond substitute was not produced in commercial quantities until late 1997 and not widely marketed until 1998.

Jewelry grade synthetic moissanite was manufactured in the United States by Cree Research, Inc. which initially developed silicon carbide products for the electronics industry. The Cree crystals were sold to and marketed by C3, Inc. which cuts and polishes the crystals into finished products. Synthetic moissanite is being positioned to compete with cubic zirconium which has sales of $200 million a year.

Prices of synthetic moissanite are about 5-10% that of diamonds. For this article, ACRN paid $122 for a loose 5mm round brilliant cut sample of synthetic moissanite. That size is roughly equivalent to about a one-half carat diamond. A good quality loose diamond that size and cut, depending on specific color and clarity, would have retailed for about $1200-$2000 around the same time period.

For best results, all test stones and probes must be clean and dry for accurate results. To be safe, test on more than one spot on each stone.

The alternative to detecting synthetic moissanite with automatic test equipment is to conduct a traditional gemological inspection. This requires specialized equipment like a polariscope, binocular microscope, specific gravity liquids, etc. Unless you are a jeweler, you're not likely to own such items and it would be less expensive to just buy the automatic testers. For those readers with the equipment and skill to conduct gemological tests, differences in the physical properties between diamond and synthetic moissanite are listed in the chart in Fig. 7.

Some visual tests may be attempted with a good quality 10X loupe. Synthetic moissanite, for example, is doubly refractive; diamond is singly refractive. Depending on orientation, the doubling of facets may be seen with a 10X hand held loupe. Try to focus on the culet while looking through the main crown facets. Ability to see the doubling seems directly related to one's experience with gems. Persons experienced looking at gems are usually able to detect the doubling; those with little or no experience generally have difficulty detecting the doubling. When using a hand held loupe, doubling is usually, but not always, easier to see on larger stones.

Diamond testers based on thermal conductivity alone are no longer reliable indicators of genuine diamonds. Special synthetic moissanite testers must now be used to establish a diamond's authenticity. Although the vast majority of synthetic moissanite is currently sold mounted in jewelry, be alert for it in replacements and repairs to antique pieces.

There is little confusion between synthetic moissanite and diamond when subjected to standard gemological testing under a jeweler's microscope or polariscope. Visual inspection with a hand held loupe, however, is not reliable and is probably beyond the skills of the average general line antiques dealer or appraiser.

Editor's Note: C3, Inc., manufacturer of synthetic moissanite, has provided a continuous flow of technical information on its products to the jewelry trade and general public. C3, Inc. routinely makes samples available for independent and third party testing to help reduce and eliminate confusion between synthetic moissanite and diamonds. 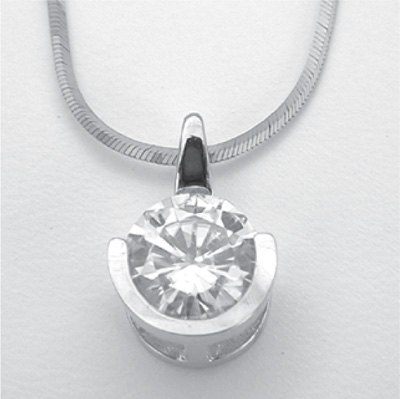 Parts of a stone

Table: also called the face, the table is the flat top of the stone.

Girdle: the dividing line between the upper and lower portion of the stone. Forms an edge making up the widest border of the stone. The girdle is usually gripped by prongs or bezel when mounted.

Culet: the lowest point of the stone, the bottom of the pavilion.

Facet: flat faces or planes that have been cut and polished

Cut: how a finished diamond is created from a rough stone. Cutting and shape are not the same. 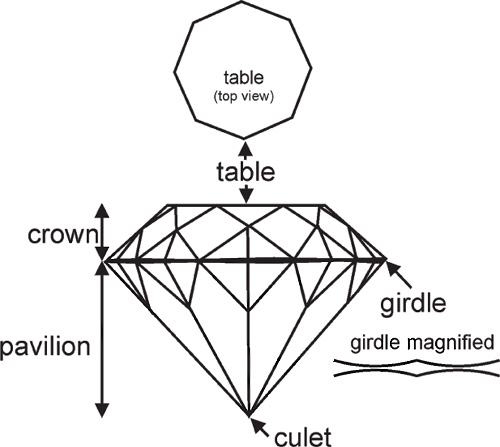 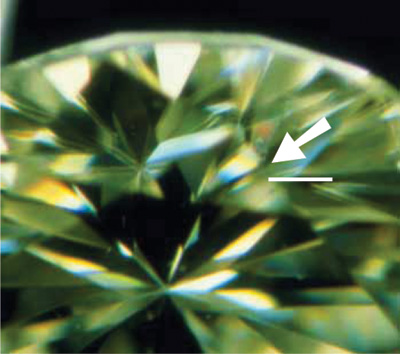 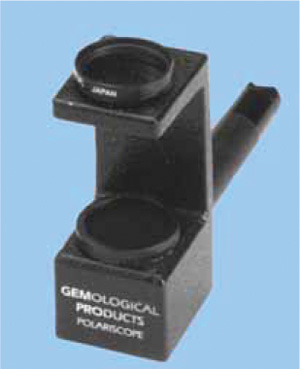 Fig. 6 A polariscope tests optical properties of stones such as whether a stone is singly or doubly refractive. Synthetic moissanite (doubly refractive) should be examined in several directions for accurate readings. Polariscopes retail for $200-$300. Model shown is by Gemological Products. Price $225 from Kessler Sales.

How to use diamond-moissanite test equipment 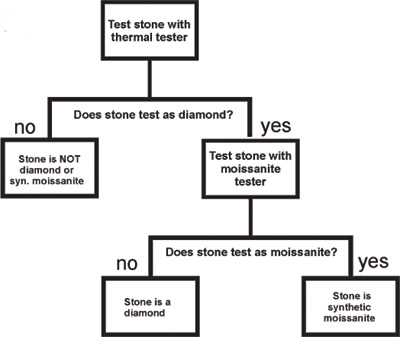