Original covered animal dishes marked McKee are among the rarest and most expensive pieces of milk glass. Some McKee animals can bring over $2000. Now new milk glass pieces are in production that have a nearly identical mark as original McKee pieces.

The original McKee mark is in raised script on the inside bottom of the base (Fig. 2). It is about 7/8" left to right, about 1/4" high. New marks are pretty much the same size so you can't use dimensions to tell old from new. There are three basic differences that separate old from new.

First, look at how the leg of the original letter "K" wraps around the end of the word McKee. The old leg resembles a hook. It is relatively horizontal before the hook curls back towards the letter "E". Compare this to the leg of the K in the new mark. The new leg is more a semi circle. The end of the new leg points straight up, not back at the letter E.

Next, compare the legs on the letter "M". The left leg of the old M is considerably longer than the right leg. Legs on the new letter M are equal in length.

Also look at the "C". The old letter C is a script style with the bottom curl extending further to the right than the top of the C. The old C is smaller than the new C and there is a distinct gap between the bottom of the old C and the horizontal line below the C. The new C is an oval shape with symmetrical (even) sides. The new C is almost twice the size of the old letter and there is virtually no gap between the new C and the horizontal line below it.

The new marks are appearing in pieces made by Summit Glass. It is thought, but not as yet confirmed, that about twelve shapes are carrying the new McKee trademarks.

Some of the new pieces are being made in genuinely old molds, others are in new molds made to resemble old pieces. Fortunately, the old molds being used are from other companies and are not original McKee molds. This is good news if you are familiar with genuine McKee shapes. If you can't recognize original McKee shapes, don't buy a piece based on the mark alone. Look the piece up to confirm it was originally made by McKee. One of the best references for McKee milk glass is Yesterday's Milk Glass by Regis & Mary Ferson, © 1981, now out of print. The majority of McKee's covered dishes are shown on a single page, shown above in Fig. 5.

The new base photographed for this article, for example, is from a double humped camel covered dish. It is not an original McKee shape. The camel mold was bought by Summit from Westmoreland Glass when that company went out of business. As far as we're aware, no original McKee shapes in milk glass are reproduced with the new mark at this time. Obviously this could change so be careful.

Price for the McKee marked reproductions are modest. The camel once cost only $20. It was purchased by a milk glass collector in Illinois.

Special thanks to Frank Chiarenza for loaning his original McKee base and providing background information. 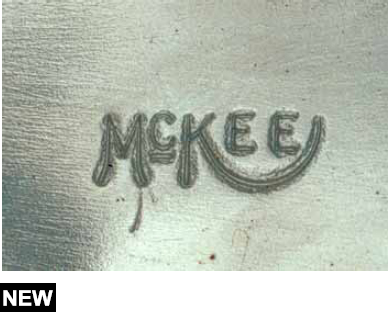 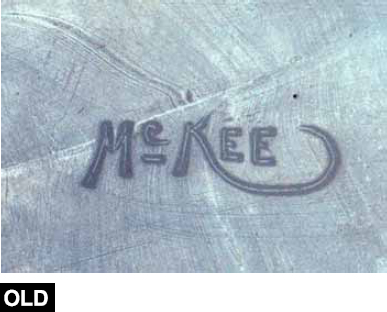 Fig. 3 Line drawing of new McKee mark. 1) Legs of M are equal length, 2) C is basically a symmetrical oval shape 3) virtually no space between bottom of C and horizontal bar, 4) curve of K is almost a semicircle.

Fig. 4 Line drawing of original McKee mark. 1) Left leg of M is longer then right leg, 2) C is smaller, lower part extends out to right side, 3) distinct gap between horizontal bar and lower part of C; 4) curve of K is a hook shape. 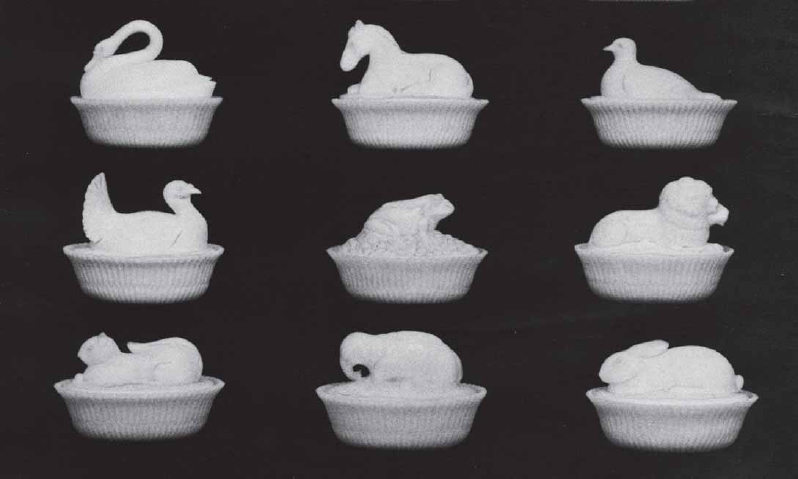 to shop with them for the Real Deal on Ruby Lane ...
Vintage McKee Toltec Milk Glass Dessert Bowl
Latent Hart
$8 Sale Price 50% Off